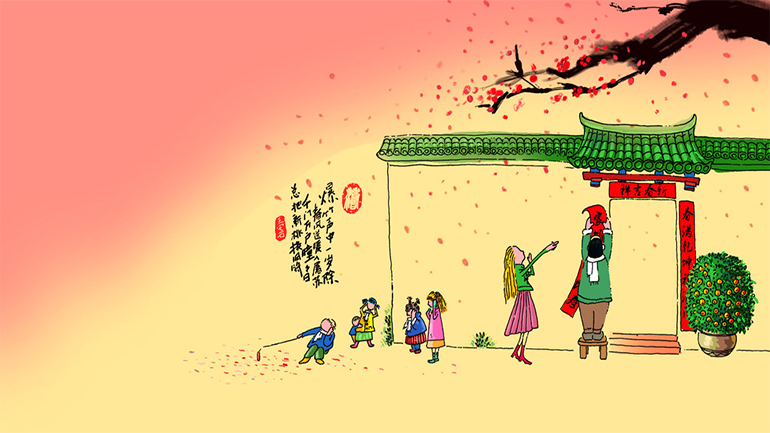 The first day of Chinese New Year officially begins at midnight. It is traditional to light firecrackers and make as much of a din as possible to chase off the evil monster nian. Most importantly the oldest and most senior members are visited with the visits strengthening family kinship. Senior members of the family hand out red envelopes containing cash (Chinese: 压岁钱), a form of blessing and to suppress aging and the challenges of the coming year, to junior members of the family, mostly children and teenagers.

On the third day, an old saying goes: “A fat pig at the door”, traditionally, the third day is known as “Chigou’s Day”. Chigou literally means “red dog”, an epithet of “the God of Blazing Wrath”, and it is considered an unlucky day to have guests or go visiting. Folklore says the 3rd day is also “rat marriage day” (Chinese: lao shu qu qin), so people often go to bed earlier to give rats time for their wedding.

The old saying “three rams bring bliss” is connected with the fourth day, which says that by making a good beginning a happy end comes. According to folklore, it is also the day to welcome back the Kitchen God. On this day, the Kitchen God would check the household and therefore people should not leave home.

The fifth day is also called the “day of cow”. According to Chinese folklore, the first seven days of the 1st lunar month are respectively called “day of chicken”, “day of dog”, “day of pig”, “day of sheep”, “day of cow”, “day of horse” and “day of man”. When creating all living beings on earth, Nu Wa, a goddess in Chinese mythology, created the six creatures before human beings. The fifth day is also the God of Fortune’s birthday and people will celebrate this day with a large banquet. This day is also commonly known as the Festival of Po Wu, literally breaking five. According to custom, it is believed that many New Year taboos can be broken on this day.

On the sixth day, people make wishes for “ma dao cheng gong”, win success immediately upon arrival. According to tradition, families usually send away the Ghost of Poverty on this day. To send away him, Chinese people will usually throw away their ragged clothes, rubbish and other dirty things. By doing this Chinese people wish to send away poverty and welcome the beautiful days and good luck in the New Year.

The seventh day is commonly referred as the “day of man”, and in most parts of China people will eat noodles as they symbolize longevity in Chinese culture.

The eighth day is believed to be the birthday of millet, an important crop in ancient China. According to folk proverbs, if this day is bright and clear the year will be a harvest year; however, if this day is cloudy or even rainy, the year will suffer from poor harvest. Meanwhile, people also set free captive animals on this day, with a blessing for all living beings to flourish in the New Year.

The 10th day is believed to be the birthday of the God of Stone which played a very important role in the agricultural society of ancient China. On this day, people are forbidden to move any stone, including stone rollers, stone mills and herb grinders, and should not cut into a mountain for rock or build a house with rocks, otherwise bad things will happen to the crops.

People make offerings to Zi Gu, the guardian angel for weak women, on the 11th day. This day is also for Yuefu (fathers-in-law) to entertain Nuxu (sons-in-law). In many areas, after this day, people will start preparing for the upcoming Lantern Festival which is on the 15th day of the 1st month.

Families buy lanterns and build a lantern shack on the 12th day.

On the 13th day, preparations for Lantern Festival continue.

The 14th day is the birthday of the Goddess of Linshui, who is believed to protect women from dying in childbirth. People make offerings to the goddess on this day.

The 15th day of the 1st lunar month is commonly celebrated as Yuan Xiao Jie, or Lantern Festival. The festivities of the Chinese New Year reach a climax on this day. Since early morning, dragon and lion dancers parade on streets crowded with people. In the evening families go out together to enjoy the full moon and appreciate colorful lanterns and also solve lantern riddles. Chinese people also eat yuan xiao, a traditional food made of glutinous rice flour which symbolizes family togetherness and reunion.