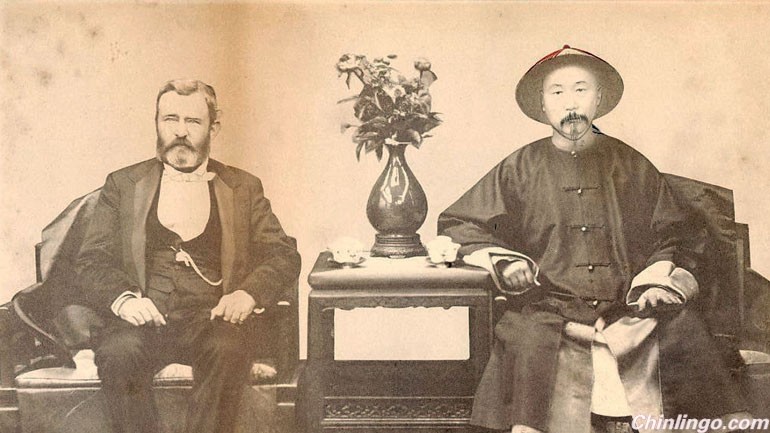 “Your Excellency has said many kind things of us,” was the reporter’s first question.” Will not your Excellency also tell us in what respect we have failed to come up to your expectations?”

” I could not say anything bad about America,” replied the Viceroy,” I have nothing to complain of in the receptions given me. They were all that I could have expected. But there is one thing that surprises and disappoints me. You have too many political parties. I have thought much about your parties. There are so many of them they must bring about confusion. Could not your newspapers try to unite them, for the best interests of the country?”

“What, among the things your Excellency has seen in this country has interested you most?”

” I am delighted with everything that I have seen in America,” said Li,” Everything has pleased me so much that it is hard to say what has pleased me most. What has surprised me most has been the tall buildings, of twenty and more stories. I have never seen anything like them before, in China or in Europe. They seem so well  constructed that they would resist any wind, perhaps; but we could not put them up in China, because the typhoon would soon blow them down. They would be terribly inconvenient were it not for your fine elevators.”

“Does your Excellency favor the education of the common people of China?”

“Our custom,” replied the Viceroy,” is to send all our boys [children, Dr. Mak put in parentheses, indicating that boys are the only real children in China,] to public schools. We have good schools all over China, but only those who can afford it send their boys to them. The poorer classes do not give their boys education. We have not so many schools or colleges as you have, but we are going to introduce more schools throughout our country.”

“Does your Excellency favor the education of women?”

The Ambassador paused for a moment and answered cautiously:” Our Chinese girls are educated at home, by their governesses. Governesses are in all families that can afford them. We have no public schools for the girls, and have no higher educational institutions which they can attend. This is due to the fact that our customs are so different from yours, both in Europe and America. Perhaps we should study both systems and adopt the one best suited to us and our needs.”

“Does your Excellency expect any modification of the existing Chinese Exclusion act?” ventured one of there porters.

“I know that you are about to hold another election, and that there will necessarily be some changes in your Government. I can not say, therefore, anything in reference to any anticipated modification or repeal of the Geary Law. I expect, however, the aid of the American newspapers in securing just treatment of Chinese immigrants. I know that the newspaper has a tremendous influence in this country, and I hope that the entire press will aid China in securing the repeal, or at least a strong modification, of the Geary Law.”

“Will your Excellency give us your reasons for selecting your homeward route through Canada instead of through the United States? Was is because your Excellency ‘s countrymen have not always met with kind treatment in some of your Western States?”

“I have two reasons for not going through your Western States,” replied Li.” First: While I was High Commissioner of the Northern Ports of China I received complaints of the treatment of the Chinese who came into your country through California. These complaints set forth that the Chinese were not accorded their rights. And they have applied tome to aid them in securing the full recognition of their rights as immigrants to America. Now, by your Geary Law, instead of granting them equal rights with other immigrants, you have denied them their just privileges. I should not like, therefore, to go through the States that have treated the Chinese in this way, nor to have to receive delegations of Chinamen who would present to me petitions pleading for a recognition of their rights in the Western States.

“My second reason is that while I am a good sailor, I am advanced in years and must study somewhat by own comfort. The passage from Vancouver to Yokahama is shorter than that from San Francisco, and I am told that the Empress of China is a larger and more comfortable ship than any I could get from any other port on the Pacific.”

“You are proud of yourselves, of your country. Your States represent the best type of modern civilization. You are proud of your liberty and your freedom; but is this freedom? This is not liberty, because you are prevented from utilizing cheap labor in your manufactories and on your farms. You are the most inventive people in the world, as is shown by the statistics of your Patent Office. You have more inventions than any other country; you are far ahead of Europe in this respect.

Besides, you do not confine yourselves to manufactures—you are an agricultural people, and you combine agriculture, commerce, and industry. You are not like England, which is the workshop of the world. You have devoted yourselves to all the means of progress and development. You are superior to the countries of Europe in the skill of your artisans, and in the quality of your manufactures;

but, unfortunately, you are not able to compete with Europe, because your manufactures are dearer than theirs. “Your labor is so high that it makes the price of your products too high to compete successfully with the countries Europe. Labor is expensive, because you exclude the Chinese. It is your own fault. If you give to labor free competition you would have cheaper labor. The Chinese can live cheaper that the Irish or the other laboring classes of the United States. Your laboring classes hate the Chinese because they are the possessors of higher virtues than themselves.

“I trust that the American newspapers will aid us in securing repeal of the Exclusion act.”

“Is there any desirable outlet for the investment of American capital in China?” asked the reporters.

“Wealth can be produced only by the combination of money, labor, and land,” replied Li very promptly,” and the Chinese Government will very gladly welcome any capital that seeks investment in the empire. Gen. Grant, who was one of my best friends, said to me:’ You must invite European and American capital to China to establish industrial enterprises, and assist the Chinese in the material development of their country and their great natural resources, but the administration of these enterprises must remain in the hands of the Chinese Government.’

We would be glad to have your capital find investment in China. The capital and skilled labor could be supplied by you, but the administration of the affairs of the railways, telegraph lines, & c., would have to be controlled by China. We must maintain our sovereign rights, and never allow anybody to touch our sacred privileges. I well remember Gen. Grant’s advice. All capitalists, whether American or European, can freely invest their money in enterprises in China.”

“Would your Excellency favor the introduction into China of the newspaper as developed in this country and in Europe?”

“There are newspapers in China, but the Chinese editors, unfortunately, do not tell the truth. They do not, as your papers, tell ‘the truth.’ The editors in China are great economizer of the truth; they tell only a part of it. They do not have, therefore, the great circulation that your papers have. Because of this economy of the truth, our papers fail in the mission of a great press, to be one of the means of civilization.”

How to call USA in Chinese| 中文怎么称呼“USA”