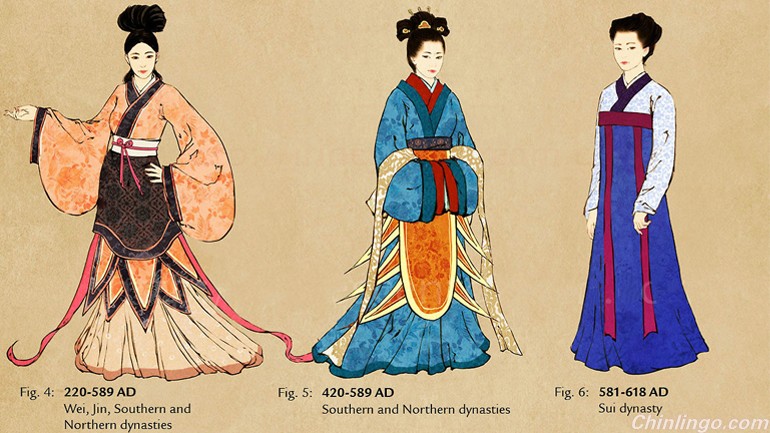 As a vital part of Chinese civilization, traditional costumes play an important role in the country’s history and culture. Their basic features are cross-collar, wrapping the right lapel over the left, tying with sash and a form of blouse plus skirt or long gown. These features have been preserved for thousands of years till the time of the Republic of China (1912 – 1949AD), when Chinese Tunic Suit (Mao Suit) and cheongsam prevailed. Nowadays, however, most Chinese wear modern clothes in their daily lives, not much difference from their western counterparts. Traditional attires are only worn during certain festivals, ceremonies or religious occasions. However, they are often seen in Chinese television serials and movies. Many of the country’s ethnic minorities also wear their traditional costumes in their daily lives and they played an important role in the traditional Chinese clothing.

Based on historical discoveries, Chinese clothes dates back to the later era of Paleolithic Times (1.7 million years ago – the 21st century BC). Materials used were of animal skins and decorations were of small stones and animal teeth. The “real” clothes were not invented until about 5,000 years ago by the Yellow Emperor. By the Shang Dynasty (17th century BC – 1046 BC), the basic features of traditional Chinese attire were created, as well as the general pattern of blouse plus skirt. Later, the long gown appeared during the Zhou Dynasty (1046 – 256 BC) and it co-existed with the blouse-skirt combinations for thousands of years, improving further as time passed. Then a great change occurred with the formation of the Republic of China, when Mao Suit became popular among the males and cheongsam among the females. In the early period of the People’s Republic of China, Mao Suit stayed popular among not only males, but also females. Later in the 1970’s, when the country implemented reform and opening policy, the masses gradually turned to western-style attire.

In addition to the basic features and patterns, traditional Chinese attires have many other features like appearance, cutting, decoration, color and design, etc, all of which changed over the various dynasties. For example, black is the most dignified color in the Xia Dynasty (21st – 17th century BC), white in the Shang Dynasty and red in the Zhou Dynasty. They also vary based on one’s political position, social status, occupation and gender, etc. For instance, dragon embroideries and bright yellow can only be used by emperors most of the time; in the Tang Dynasty (618 – 907 AD), purple official costumes are for the fifth or higher rank officials; in the Qing Dynasty (1644 – 1911 AD), the higher a person’s social rank or the richer one was, the more embroideries and borders there were on his attires.

Although the fashion trend changes over time, there are several types that are popular till today both at home and abroad. 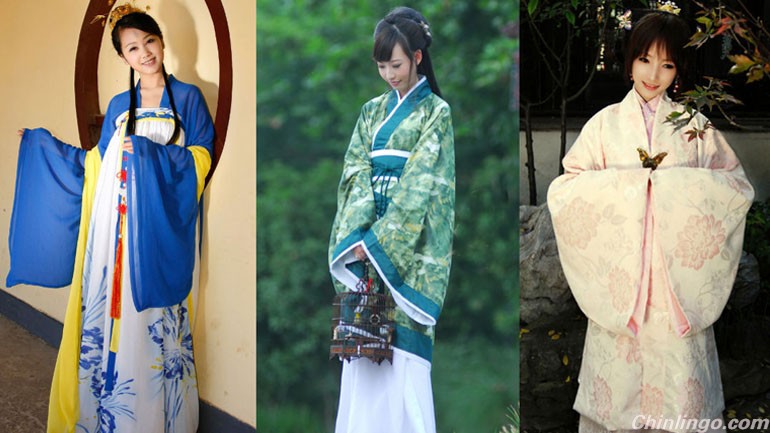 Traditional Han Chinese Clothing (Han Fu): It refers to the attire worn by the Han people from the enthronement of the Yellow Emperor (about 2698 BC) till the late Ming Dynasty (1368 – 1644 AD). It became known as the Han Fu (“fu” means “clothes” in Chinese) because the fashion was improved and popularized during the Han Dynasty. It is usually in the form of long gown, cross collar, wrapping the right lapel over the left, loose wide sleeves and no buttons but a sash. Although simple in design, it gives different feelings to different wearers. 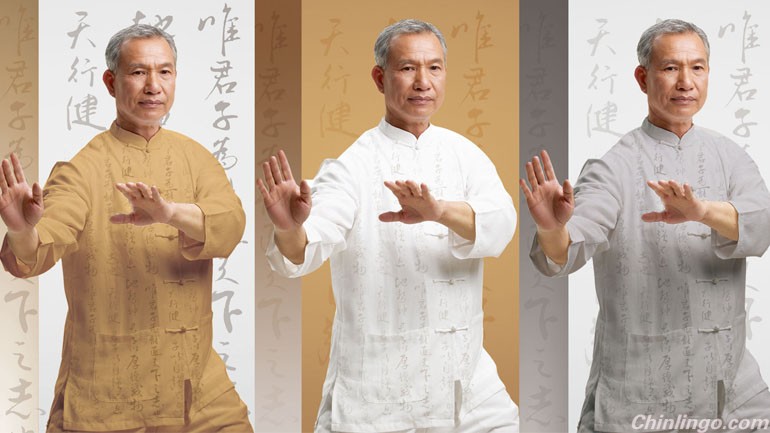 Chinese Suit (Tang Zhuang): It is a combination of the Manchu male jacket of the Qing Dynasty and the western style suit. It is usually straight collared, with coiled buttons down the front. Its color and design are in traditional Chinese style but tailoring is western. 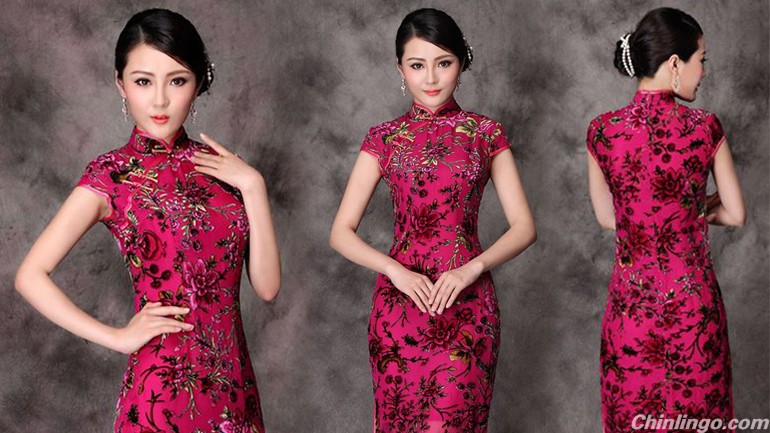 Cheongsam (Qi Pao): Originated from the Manchu female clothes, it evolved by merging with western patterns that show off the beauty of a female body. Its features are straight collar, strain on the waist, coiled buttons and slits on both sides of the dress. Materials used are usually silk, cotton and linen. Cheongsam is the most popular Chinese attire in the world today. 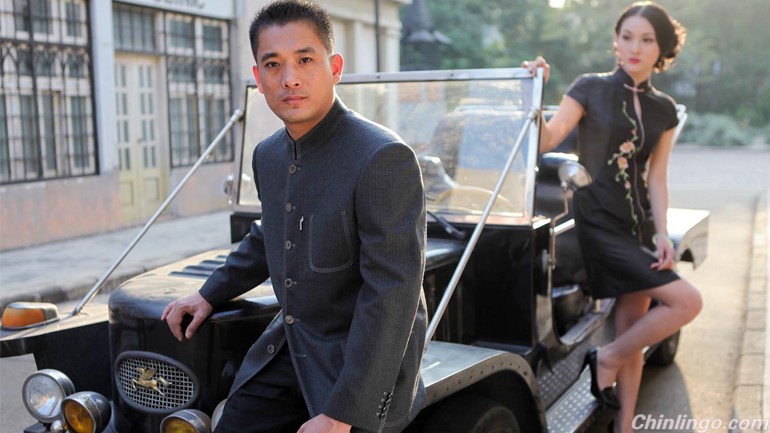 Chinese Tunic Suit (Zhongshan Zhuang): Also called the Yat-sen Suit, it is designed by Dr. Sun Yat-sen by combining the western-style suit and Chinese attire. It has a turn-down collar and four pockets with flaps. As Chairman Mao Zedong worn it quite frequently, it is also called the Mao Suit by westerners. It is the main attire from the founding of the People’s Republic of China in 1949 till 1980’s. The country’s leaders still wear it today when attending important occasions, such as military parades.

Traditional Manchu Clothing: It is the traditional dress of the Manchu ethnic nationality, usually in the form of long gown and sometimes with a jacket or waistcoat outside. Since Manchu is the leading class of the Qing Dynasty and their dresses were strongly promoted, this kind of clothes was very popular in that period. The characteristics are round or straight collar, fasten with buttons from the right collar and a sash on the waist, two or four slits, and tight sleeves with cuffs shaped like horse hoofs.

Traditional Clothing of the Other Ethnic Minorities: In addition to Manchu, the country has 54 ethnic minorities and each of them has their own unique costumes. Unlike the traditional Han Chinese costumes, these costumes are still widely worn today. Basically, they can be divided into two types: long gown and short coat with pants or skirt. They usually wear long gowns with hats and boots; others prefer short coat and generally wrap their head with cloth and wear shoes.  People wearing the same type of clothes can be further distinguished by the costume details like the structure, craft and style, etc. Take the long gown for instance.  The Mongolian and Tu nationalities prefer high collared gown with buttons down the front; the Tibet and Monba groups wear collarless gown with buttons on one side and the Uygur love those with buttons on the right.

Dragon Robe: It is so named because of the embroidered dragons on it.  It can only be worn by the emperor, who was considered a dragon from heaven in the ancient times. Other characteristics of a dragon robe are round collar, buttons on the right and most of the time in bright yellow.

Officials’ Uniform: Unlike modern China, almost all kinds of officials in ancient times had uniforms. They are strictly distinguished by colors, embroidered patterns and hats, etc. For instance, in the Ming Dynasty, the embroidered pattern on a first rank civil officer’s uniform was a crane, second rank a golden pheasant, third rank a peacock, fourth rank a wild goose, fifth rank a silver pheasant, sixth rank an egret, seventh rank a “purple mandarin duck”, eighth rank an oriole and ninth rank a quail.

Traditional Wedding Costumes: Chinese traditional wedding costumes vary in different dynasties and time periods. However, they are red most of the time as red is considered lucky, happy and auspicious in the country’s culture. The most well-known are red chaplet and official robes, which are still widely worn today by newly wed in traditional style wedding ceremonies or for taking wedding photos.

Learn native Chinese with Chinlingo, Easy and Fun with us