In my first couple of weeks of living in China, I met many people and as well as hearing many introductions, I had to introduce myself, over and over again. Many Chinese people have English names they use in order to go easy on us ‘laowai’ (foreigners), but I try my best to address people by their Chinese names as I love the wonderful meanings they have. In fact, I am learning a plethora of new Chinese words just by learning people’s names and asking what they mean. So far I have met people with names that mean strong, happy and wind, to name a few. I even met someone whose name meant that his parents hoped ‘he would study hard’!

My Chinese name
Khafi Kareem
Being a ‘Bigerian’ (British-Nigerian), this inevitably reminds me of Nigerian custom where the meanings of names are highly important and parents go to great lengths to decide on a name for their child. This usually leads to children being given numerous names, with the aim of bestowing as much blessing upon them as possible. Taking the example of Yoruba culture, names are deemed so important that there is even the tradition of a naming ceremony; an observance that is specifically dedicated to celebrating the name a child has been given. Names may be based on circumstances of birth ie whether the child is a twin (Taiwo/ Kehinde), whether they were born on a holiday (Abiodun) etc, but many Yoruba names make reference to God, ie Oluwafemi (God loves me) or Oluwamayowa (God brought joy). I loved my cousin Subby’s name; it was Ogooluwasubomi (pronounced oh-go-Olu-wah-shoo-boh-me) and it means ‘the glory of God surrounds me’. She passed away last year but whilst alive she truly lived that meaning, the glory of God really did surround her and she was a blessing unto everyone she met.
I never used to think of name meanings as that important and I remember when I was younger I would say that I would make up names for my children so that they would be unique and no one else would have them (pretty much what many celebrities are doing now). The more I’ve looked into it however and more people I meet here in China, the more I realize the power a name holds. It goes without saying that your name is a key part of your identity, but I am becoming ever more persuaded that names with meanings can have a bearing on your character and in some cases, even the kind of life you end up living. I daren’t say that a baby comes out of the womb being an embodiment of his or her name straight away, but even if it is solely because of the power of the tongue/ affirmations etc, I do think that in most cases people reflect their names. For example, if your name is Eniola (‘person of wealth’ in Yoruba), are you telling me that after a lifetime of people constantly professing that you are ‘a person of wealth’ with every mention of your name, that you won’t eventually become that in one way or another? My first name in full is Khafilat and it means ‘servant-hearted’. Although there are times I am not very servant-like at all (like when I’m tired and I want to sleep), I genuinely love serving others and am at my happiest when doing so. Coincidence? I think not!

Okay so having said all that, (I really didn’t intend for this to be a cultural lesson!) I am pleased to announce that I officially have a Chinese name. 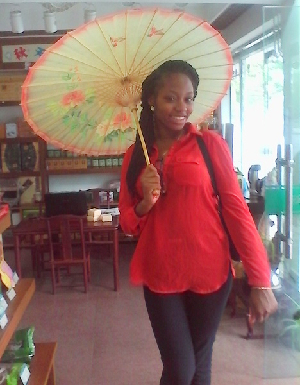 Yep, my Chinese name is Kafei (coffee). Initially, whenever I introduced myself to people in China, people kept remarking that my name is very similar to how you pronounce coffee in Chinese (Kah-fay). Whilst it’s quite funny, they said it made my name easy to remember (and it’s a great ice-breaker!) so I’ve stuck with it. At first I thought for all the great Chinese names I’ve heard, that’s a bit boring (and weird) to have a name, but being the kind of person who tries to find the silver lining on every cloud as they say, I have found that ‘coffee’ is actually quite a befitting name for me.

Firstly, coffee is a stimulant. Even though during my first week here I wasn’t as sprightly as usual due to the jet lag issue, I do bring energy and enjoyment to everything I do and I’ve been told that my enthusiasm is infectious, so I guess I do ‘stimulate’ the environment around me.

Secondly, have you heard the story of the carrot, the egg, and the coffee bean? If not, google it! (Or watch Action Jackson recount it by clicking here.) The story is a metaphor for what kind of person you can be when going through life. In short, an egg, a carrot, and a coffee bean are put into separate pots of boiling water and left to cook for a period of time. At the end of that time, the result is that the carrot went in hard but then came out soft and weak. The egg went in soft on the inside, but then came out hard both on the inside and out. The ground coffee bean was different, however. It went into the water and changed the water, releasing flavor and fragrance. So although the carrot, egg and coffee bean each faced the same circumstance, for the coffee bean, the very thing that brought adversity (the boiling water) brought out the best in it!

So yes, my Chinese name is ‘Kafei’ and I hope to live the meaning and be a coffee bean!