The origin of Mid Autumn Festival

The Mid Autumn Festival has a long history in China.Sacrifice the Moon in autumn is a custom in ancient China.There are a lot of legends about the mid autumn festival.

Let me tell you the story about Chang E flying to the moon. 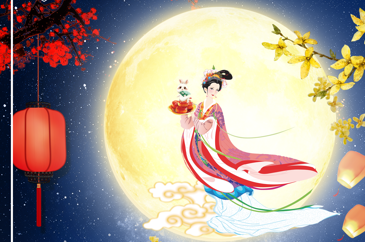 Long time ago, there were 10 suns on the sky. They were 10 sons of the god. The god commanded that they must decide a person to bring the light and warm to the earth a day. So there was always a sun on the sky. One year, 10 suns wanted to went to the earth together. They made earth dry and fire. People could not live, and the nature was broken. A god named Hou Yi, who is a sharpshooter wanted to save people. He used his arrow to shoot 9 suns down. Only left one to hold on the earth. Although Hou Yi saved people, but the god was angry. He made Hou Yi a human and said he could never be a god again.

Hou Yi married a beautiful woman Chang E. She is pretty and kind-hearted. Hou Yi love her very much. He hunted in the morning and back home at night. People admired this couple. Hou Yi got a lot of disciples who wanted to learn his hunting skills. One evil person, Peng Meng also was his disciple.

One day, Hou Yi went to the KunLun montain to visit his old friends. He met the Heavenly queen. She gave Hou Yi a  pill which can make people not to die and live forever. Hou Yi didn’t want to leave his wife Chang E along. So he went back home and asked Chang E to hide it. Chang E put the pill in her cabinet, but is was watched by Peng Meng.

After 3 days, while Hou Yi took went hunting with his disciples, Peng Meng went to his house with a sword. He ordered Chang E gave out the pill. Chang E knew she couldn’t resist, so she swallowed the pill. She float immediately to the ground, ran out the window, and flied to the moon.

When Hou Yi backed home, PengMeng was escaped. Hou Yi rushed out the room and shout Cheng E’s name. He saw a shape on the moon similar to his wife. So he went back and put a lot of foods to sacrifice Chang E.

Since that, tradition of making sacrifices to the moon carried through the ages, from the Western Zhou Dynasty (1045 to 770 B.C.) onward.

0 responses on "The origin of Mid Autumn Festival"