10 Chinese foods foreigners hate the most

The other day I read an article on WeChat that was called "10 Chinese Dishes Foreigners Can't Stomach". This type of articles are usually not too objective, as what someone dislikes, the next person can love, but nonetheless I sometimes find them entertaining. With this particular list, I realized that I had tried all of the dishes and that I didn't think many of them were among the most disgusting foods in China. There are things way worse than the ones that appear here. But this list was supposedly published by QQ so did they do some kind of survey? Not too sure about that, as QQ is used mainly by Chinese. Maybe these are the dishes that Chinese people think foreigners will find revolting? But let's see the list! 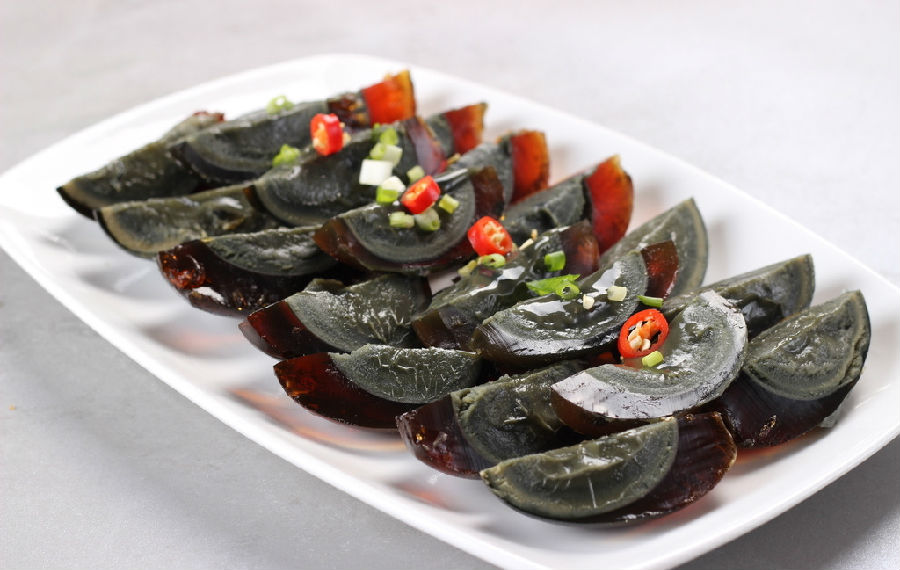 I can't believe my beloved century egg is in the first position! Ok, it does look a bit weird, being a green egg and all. But it's actually not bad. The taste and the smell are not strong. They are not supposed to be eaten in big quantities, but with shredded pork in a rice congee they are delicious. I also like cold tofu mixed with century egg. (By the way, they are not really one century old). 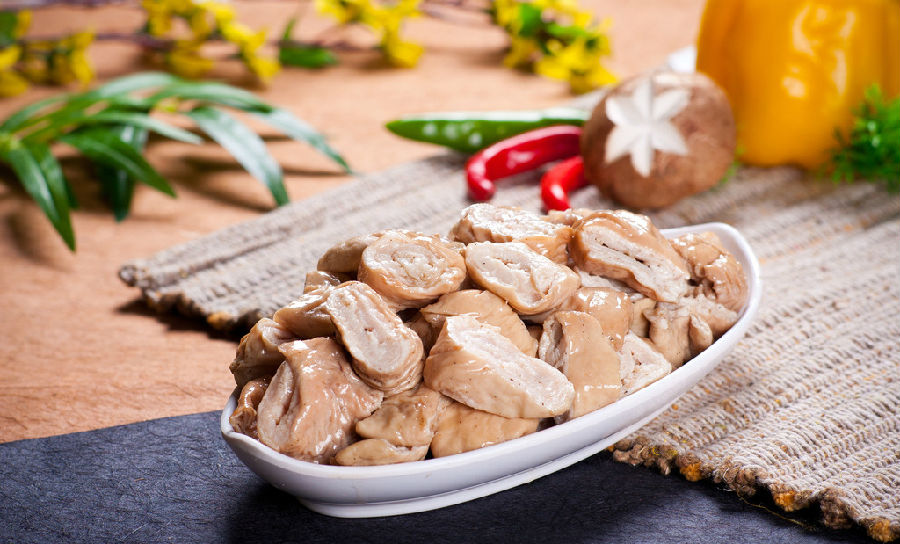 I can understand that this can be a shock for delicate people, as the smell is very strong and the texture is like rubber. It's definitely not one of my favourite dishes. However, innards are eaten in many countries, not only China, so this dish shouldn't come as a big surprise. There are more ways of cooking intestines, one of the most popular being in spicy hot pot (where you can choose between your preferred body part: brains, stomach, kidneys, intestines… of pig, chicken, duck or cow). When we have a big family dinner in the winter, one of the dishes always is a soup made with intestines and black pepper. It smells like the bedroom of Satan must smell and the flavour is super strong, but you will get very warm in approximately 5 seconds. 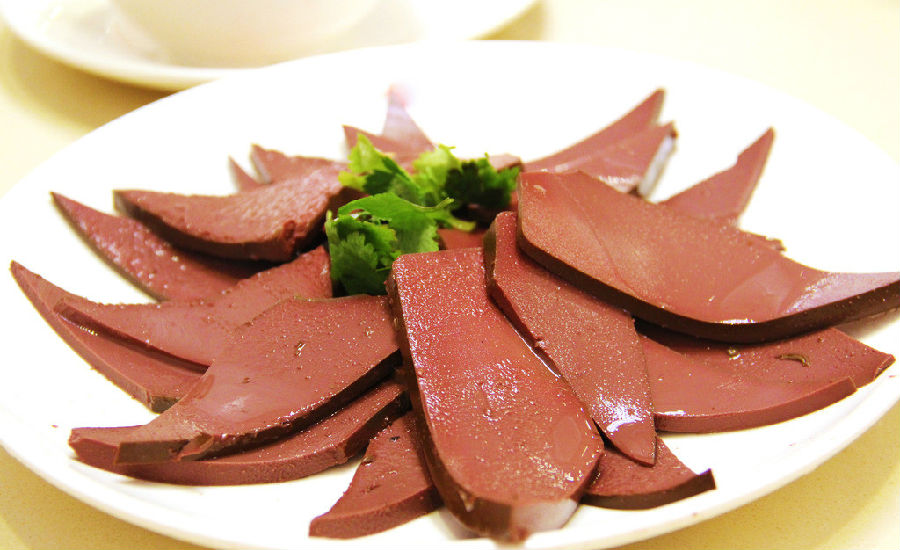 I think with this one the worst is actually the name. Blood, ugh. Are we vampires or what? But, actually, blood is eaten as food in many countries. In Spain we have what looks like a black sausage but is in fact made with blood (it's called morcilla). In China the most popular blood is duck's blood and it is eaten in cubes with rice noodles, or in the hot pot. I eat it if I have to, but I don't like it too much, mostly because it doesn't really have any taste. 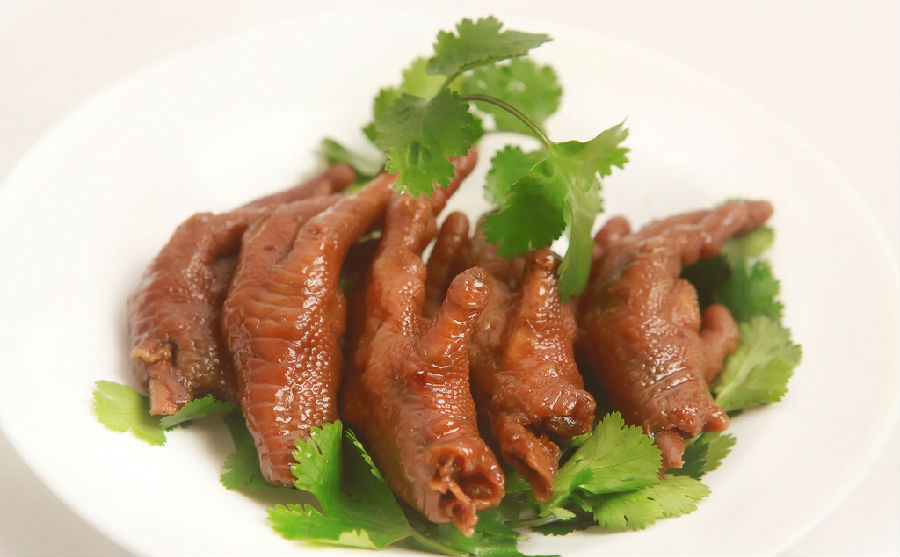 This is probably the dish foreigners gag at the most, together with number 6. I guess it's because is very obvious what it is, as there are not many ways to disguise the foot of a chicken. For Chinese people this is a delicious snack. To be honest they don't have much to eat, just a little bit of skin and soft cartilages. I don't think they are bad (except the ultra spicy version, which burns my lips only by looking at it) but I think it is a waste of time to nibble and slurp for such a long time to get so little food. In Suzhou's famous old street Pingjiang Rd there is a very popular place that sells them and you might have to queue for one hour to taste them. 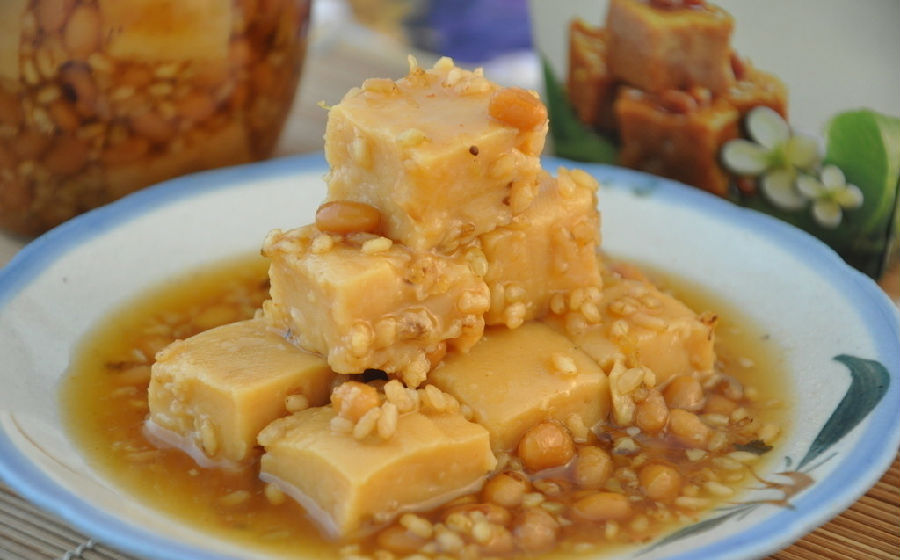 This one has a very strong flavour so if you put a cube in your mouth you will probably die. They are not supposed to be eaten by the spoonful, but mixed together with rice: with each bite of rice or spoon of congee, you take a small piece of fermented tofu. I'm not a big fan but I can eat it. 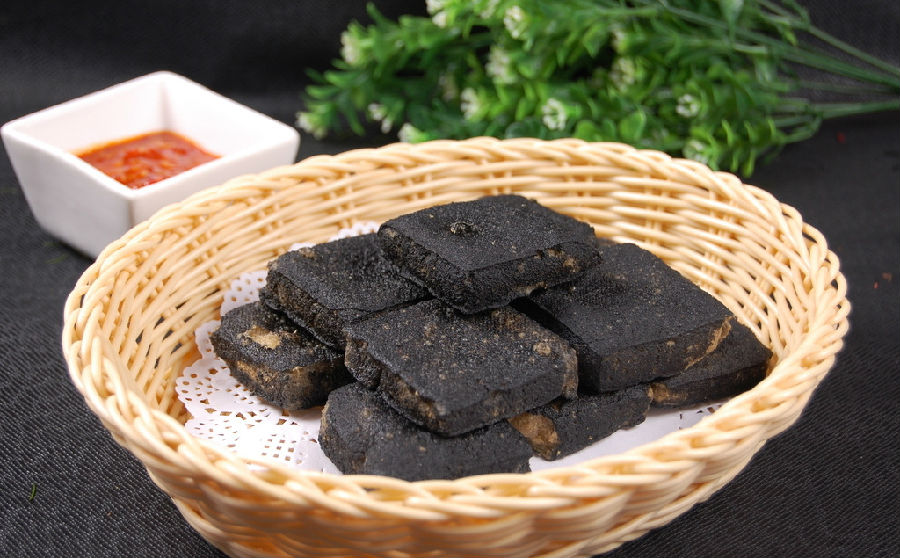 This one is indeed one of the most universally hated by foreigners. Stinky tofu has a very appropriate name, as it smells like a public toilet that had not been cleaned in years (that is, like most public toilets in China, because they are only cleaned with dirty water and no bleach or detergent of any kind). It's a very peculiar smell that drove me crazy during my first weeks in China as I didn't know what the stink was or where it was coming from. Stinky tofu is simply tofu fermented in a special brine. When it is being cooked is when it stinks the most, when you eat it the smell is not that strong. I like it. 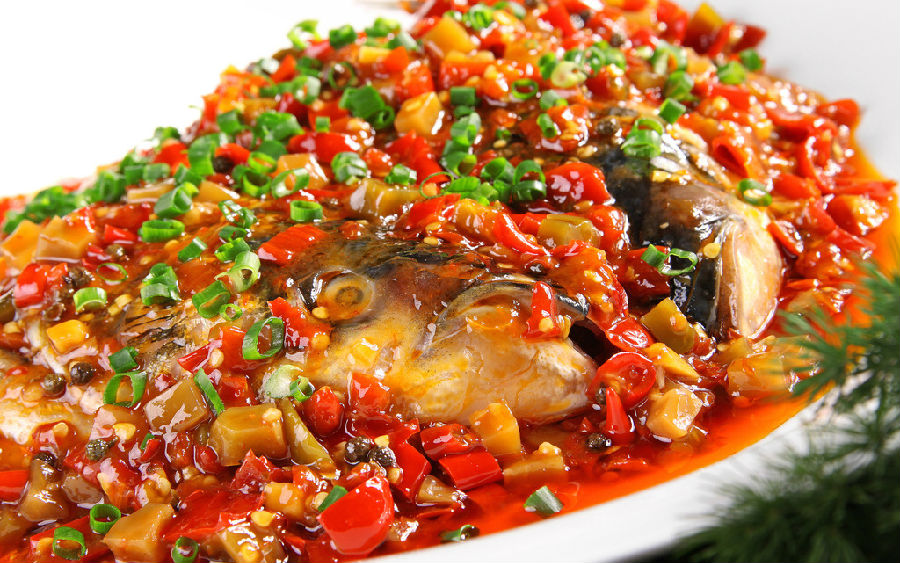 I don't really understand why anyone would consider this disgusting. Have you ever eaten grilled salmon head? It's delicious. However in China they use white fish (carp or something like that) and they cook it super spicy and with quite a lot of oil. Not my favourite dish by far but I don't think it's gross at all. 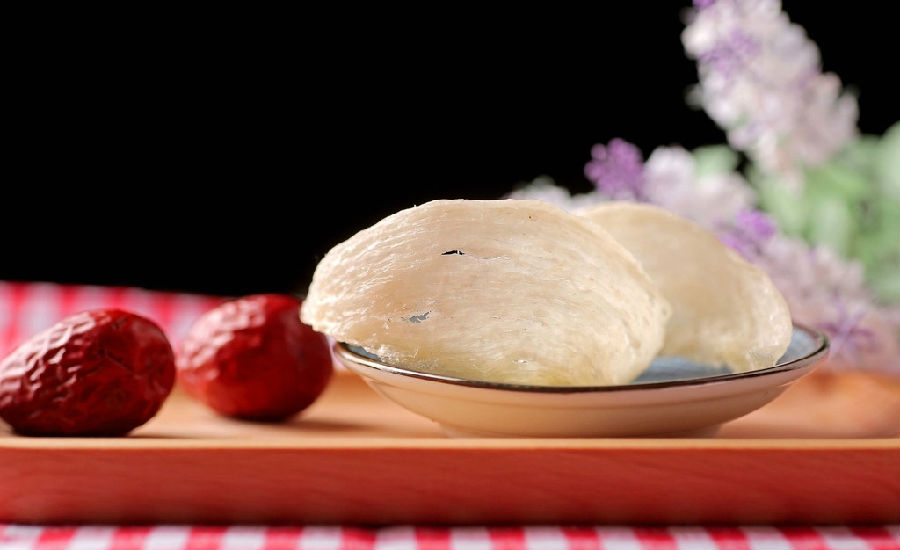 This is a delicacy in Chinese cuisine, and the bird nest is super expensive. I have eaten it but I am not sure if it was the real deal. The ingredient is actually bird's saliva, which doesn't sound very appetizing. It looks like a white mushroom that is very popular and cheap, so maybe what I ate was actually that and perhaps it had a tiny tiny piece of bird's nest. Not sure. Anyway, it was good. It tastes sweet. 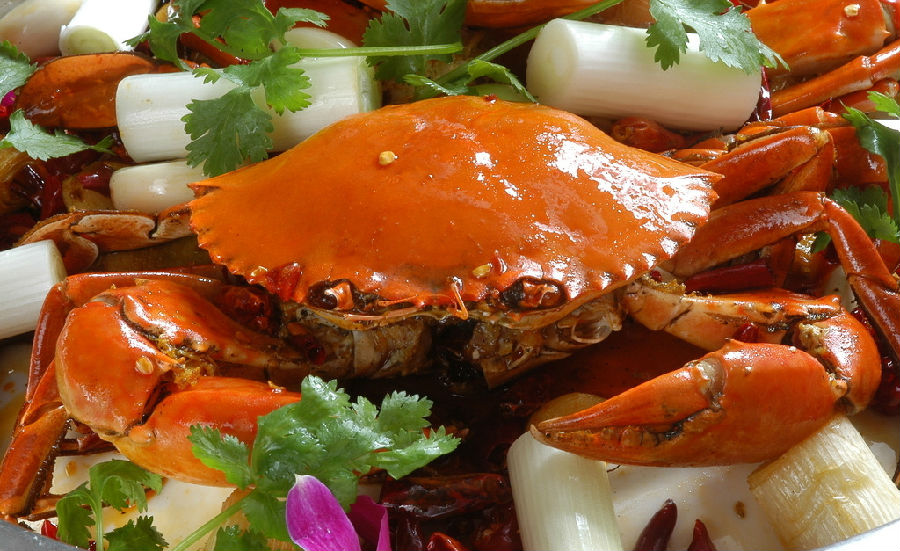 I think it's baffling that this one is on the list. Crabs are a very common thing to eat, no? This variety is called hairy because they have a kind of furry sleeve on their claws. These crabs are actually from Suzhou and when the crab season starts (after the summer) everybody gets crazy for them. C.'s company always gets hundreds of boxes to give to customers and every year I get up one day to find my fridge full of small black eyes staring at me and doing weird sounds with their tiny mouths. They are good, but I am very lazy to eat them. All that cracking and slurping to get such a small piece of meat! 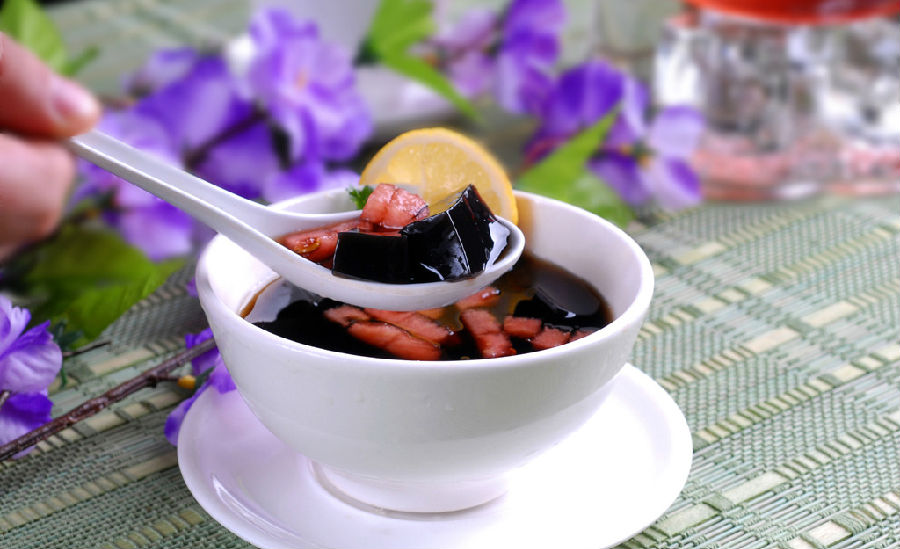 This one I have eaten only once and I didn't know what it was. It's a black and sweet jelly served as a dessert. I'm pretty sure I got it for free with my lunch or it was included in the set menu, so I don't think it was the real deal. The original recipe contains an ingredient from the shell of turtles, but it seems many of the cheaper ones offered in restaurants are just made with herbal extracts. Which is totally fine for me. I don't want to eat turtles.

0 responses on "10 Chinese foods foreigners hate the most"