Before cranking up the techno at his 80th birthday party, the man known as China's hottest grandpa paused from his D.J. duties to poke fun at the staid traditional celebrations for the elderly in a country that venerates old age.

"I should wear a long robe, with the word 'longevity' embroidered on the front," the birthday boy, Wang Deshun, said at his party in September. Far from looking old and frail, the silver-haired actor, model and artist wore a crisp white shirt and black jeans, his back straight and his eyes glittering with humor.

"Two young maidens should help me into an old-style wooden chair," he continued, pretending to dodder. "On a table in front of me there should be peaches," a symbol of longevity, "and my students should kowtow, wishing me a good birthday."

"So, what am I doing today? My students from 30 years ago are putting on a fashion show, and I'm the D.J.," he said, signaling the start of the show with a thudding techno mix.

Determined to avoid mental and physical stagnation, Mr. Wang has constantly explored new skills and ideas while devoting ample time to daily exercise. Last year, at 79, he walked the runway for the first time, his physique at his age causing a national sensation. He takes obvious joy in subverting China's image of what it means to be old.

And old age in China begins relatively early. The legal retirement age for women is 50 for workers and 55 for civil servants, and 60 for most men. Mr. Wang is having none of that.

"One way to tell if you're old or not is to ask yourself, Do you dare try something you've never done before?" he said in a recent interview at a Beijing hotel.

Being older in China typically means being respected, but also, often, sentimentalized. Someone as young as 50 may be addressed as "yeye" or "nainai" — grandpa or grandma — regardless of whether they have offspring. Retirement homes are known as "respect elder homes."

Mr. Wang has not escaped being called grandpa — he has two children and a 2-year-old granddaughter — but the honorific is accompanied by accolades for his vigor and embrace of the new.

"Mr. Wang's attitude is very much needed today," said Lu Jiehua, a sociologist at the Center for Healthy Aging and Development Studies at Peking University.

"Many old people drop contact with the outside world and curtail their involvement in society, which is dangerous," Mr. Lu said in an interview. "Providing elders with opportunities to be active in society is as important as caring well for them."

"China's hottest grandpa," as many call him, was born in the northeastern city of Shenyang in 1936, one of nine children of a cook and a stay-at-home mother. At 14, a year after the Communist Party came to power in 1949, he began working as a streetcar conductor.

"I liked acting, singing, dancing, playing musical instruments so much that I joined my work unit's band," he said. At the Workers' Cultural Palace in Shenyang, he took free lessons in singing, acting and dancing. He later took a job at a military factory and joined its art troupe. Sometimes they entertained soldiers.

"Even if there was just one sentry, say, at the top of a hill, like once in Dalian, we'd surround him and perform," Mr. Wang said.

Radio, film and theater work followed. In the early 1980s, Mr. Wang, who would later teach runway modeling at a Beijing fashion school, staged what he believes was the first modeling show in the northeastern city of Changchun.

By 49, Mr. Wang was eager to move to Beijing, China's cultural capital. He wanted to be a "living sculpture." He also needed money.

He began working out, determined to have a lithely muscled body that would allow him to interact, almost naked and covered in metallic paint, with copies of Auguste Rodin's and Camille Claudel's sculptures of women. The idea, he said, came from his wife, Zhao Aijuan. The two have been married for 48 years. 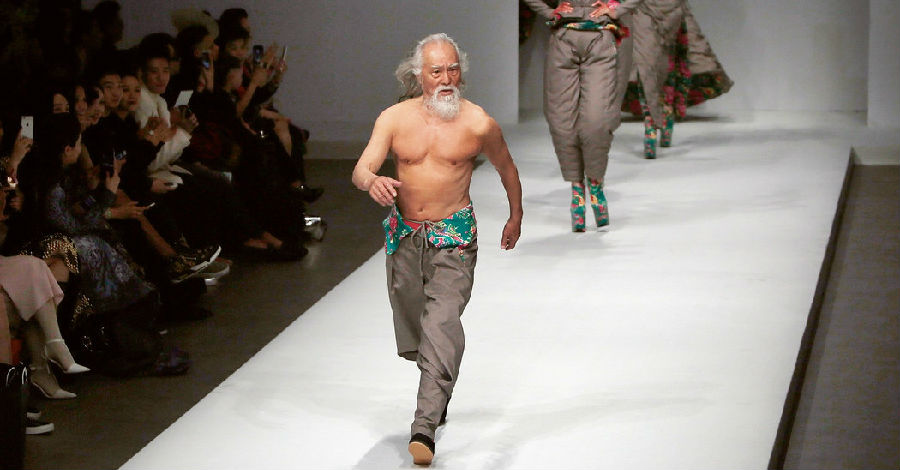 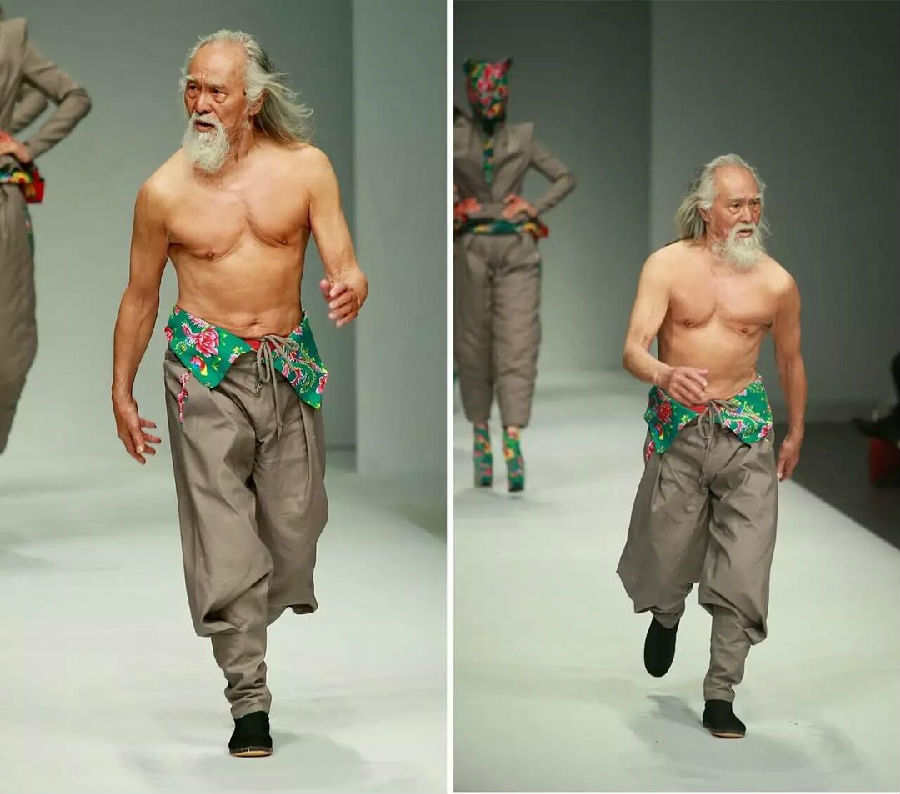 Last year, at age 79, he appeared bare-chested in a fashion show in Beijing's 798 arts district featuring designs by Hu Sheguang.

His appearance on the runway earned him a cultlike following. Some fans call him laoxianrou (老鲜肉) — "old fresh meat," a play on the word for teen idol: xiaoxianrou (小鲜肉), or "young fresh meat.''

Perhaps not, but Mr. Wang is a phenomenon. Not just for his physicality — notable in a society where men rarely highlight their beauty — but also for the example he sets in a society that is growing older fast.

"People can change their life as many times as they wish," he said. Having a goal is important, which is why he constantly learns new things.

And one day soon, he said, parachuting. That's the plan.