Jianbing – the most popular street breakfast in China 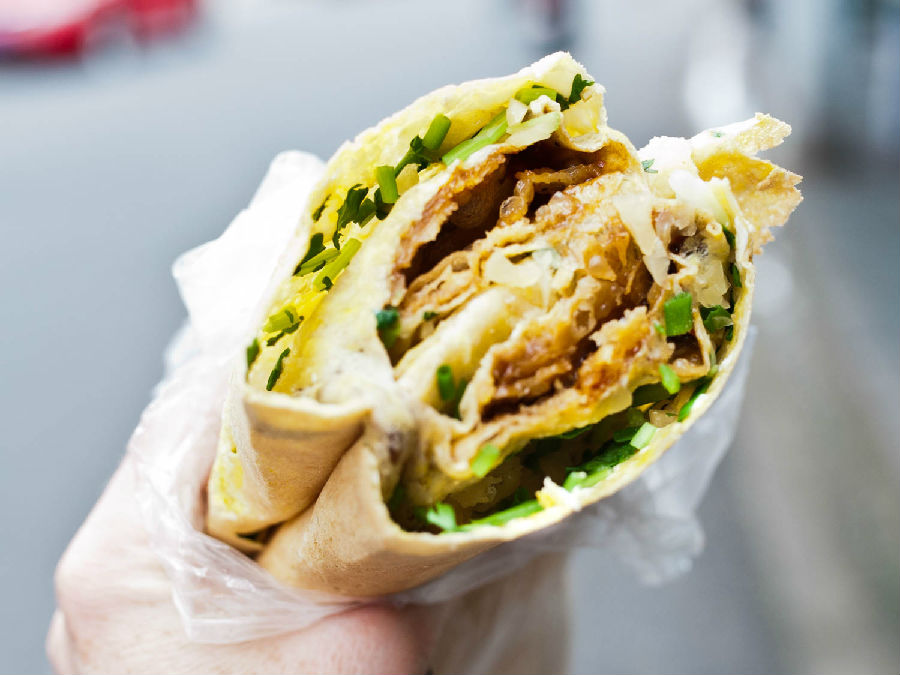 Jianbing is one of China's most popular street breakfasts. And while all manner of Chinese buns and dumplings have spread well beyond the country's borders, it also might be China's best-kept culinary secret. The savory crisp-fried crêpes are all about bold contrasts of flavor and texture: eggs, spread over the surface of the wheat and mung bean flour pancake as it cooks. Crunchy puffed strips of fried wonton. A jumble of grassy cilantro, peppery scallions, and tangy pickles; a sweet and spicy layer of hoisin and chili sauces. And each one is cooked fresh to order on a circular cast-iron grill, just the way you want it.

Every metropolitan neighborhood across the People's Republic has its own jianbing vendor serving breakfast from dawn through mid-morning, satisfying hungry locals on their way to work. But until recently, you might have struggled to find jianbing outside of China and Taiwan. Now a few Western pioneers, self-taught in the secrets of making jianbing, are bringing them home to America and Britain.

A breakfast worth waiting for

Jianbing stands are the ephemeral breakfast architecture of every Chinese city. At around five in the morning, the vendors appear with everything they need, packed on the back of a bicycle or motorbike: A heavy circular grill, a few tubs of ingredients, and a tin box for collecting their takings. Oh, and about twenty dozen eggs, precariously stacked in cardboard trays tied together with raffia string. They set up in unused spaces—doorways, shuttered shop fronts, street corners—and within minutes of the first bing (pancake) crisping on the hot griddle, there's a line.

As transient as these jianbing stalls might be, this is no grab-and-go street breakfast. For jianbing, there is always a line. You might be late for work, or filled with ravenous hunger, but that's all irrelevant to the vendor behind the griddle. To preserve the crispness of the pancake and fried wonton filling, jianbing are never cooked ahead of time, so waiting for your turn is part of the culture. If you need to eat something fast, buy a baozi (steamed bun) instead.

Jianbing have a longer history than almost any other Chinese street food. Thought to have originated in Shandong Province during the Three Kingdoms Period (220–280 AD), military strategist Zhuge Liang had his soldiers cook batter on shields held over the fire after their woks were lost.

The recipe for a modern day jianbing holds fairly closely to this principle. A thick, sticky wad of dough is deftly spread into a giant pancake, thin as a crêpe, using a thick wooden paddle. 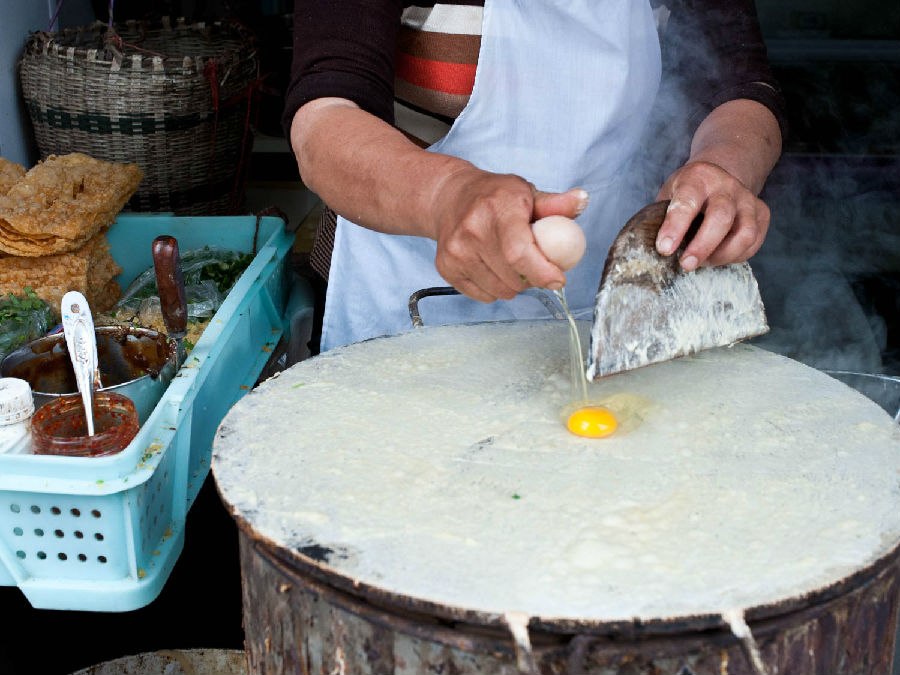 While the crêpe cooks, an egg or two are cracked onto its uncooked surface and spread evenly… 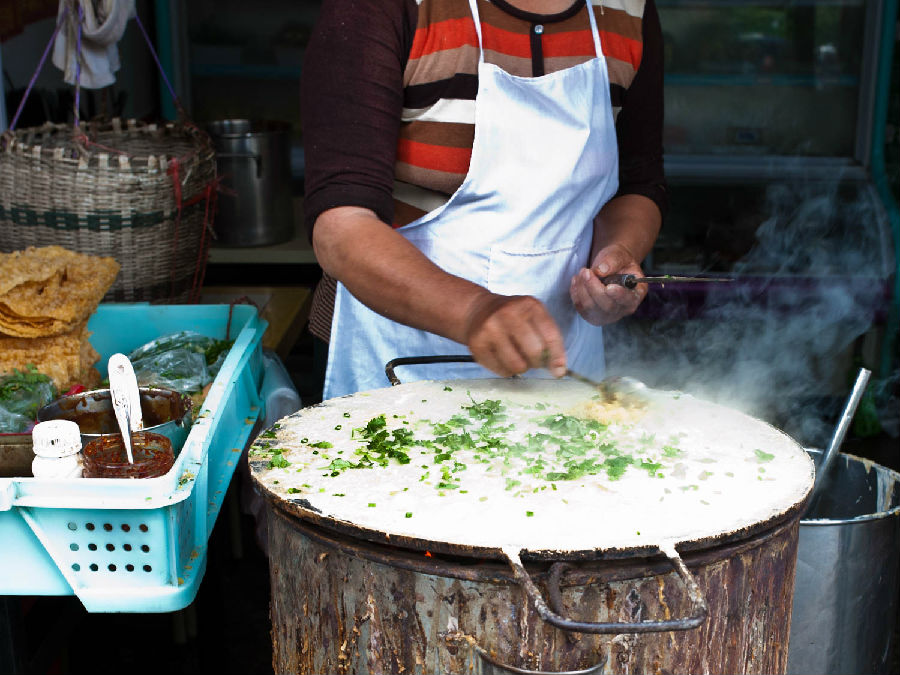 And then topped with finely chopped mustard pickles, scallions, and coriander. 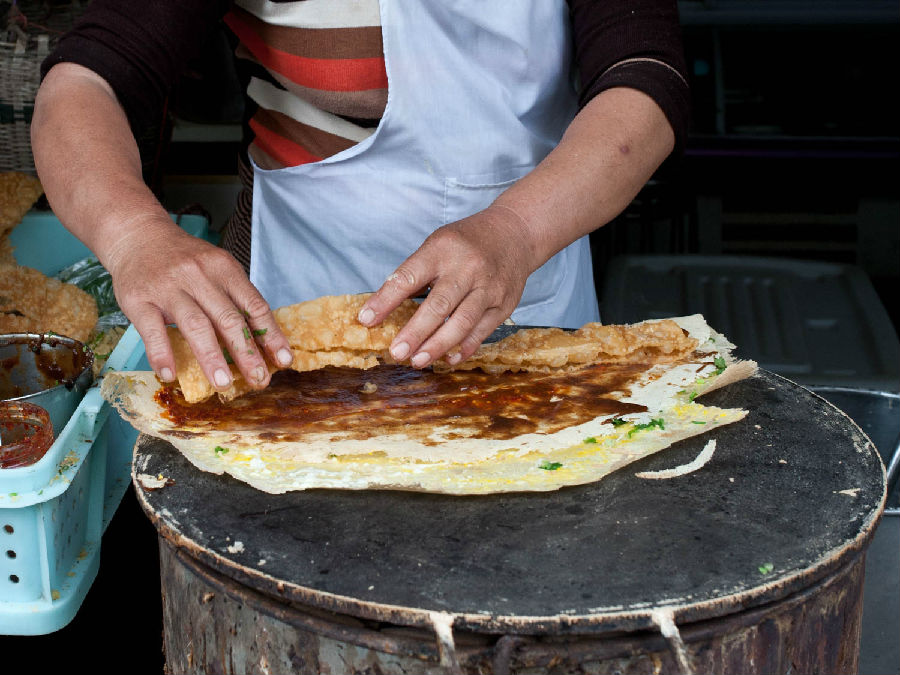 The jianbing is folded in half like a fan, and hoisin sauce and lajiao chili sauce spread on the back to taste. For crunch, the vendor folds the bing around a sheet of crispy-fried wonton and some lettuce, before chopping it in half to make it easier to eat.

Of course, if jianbing were that easy to make, they would have taken the world by storm long before now. Part of the challenge in replicating the dish is that the batter and fillings used in jianbing differ by region, and even by vendor. In northern China, the batter might be made from mung bean or black bean flour, while on the East Coast it's a combination of wheat flour and mung bean flour. In Tianjin, they use you tiao (fried dough sticks) rather than fried wontons as filling, calling them jianbing guozi. Other fillings vary too, ranging from Chinese sausage to shredded carrot, grated radish, chicken, or even—in cosmopolitan Shanghai—strips of crisp-fried bacon. Many consider making your own jianbing impossible without months of practice and tuition from a master.

0 responses on "Jianbing - the most popular street breakfast in China"