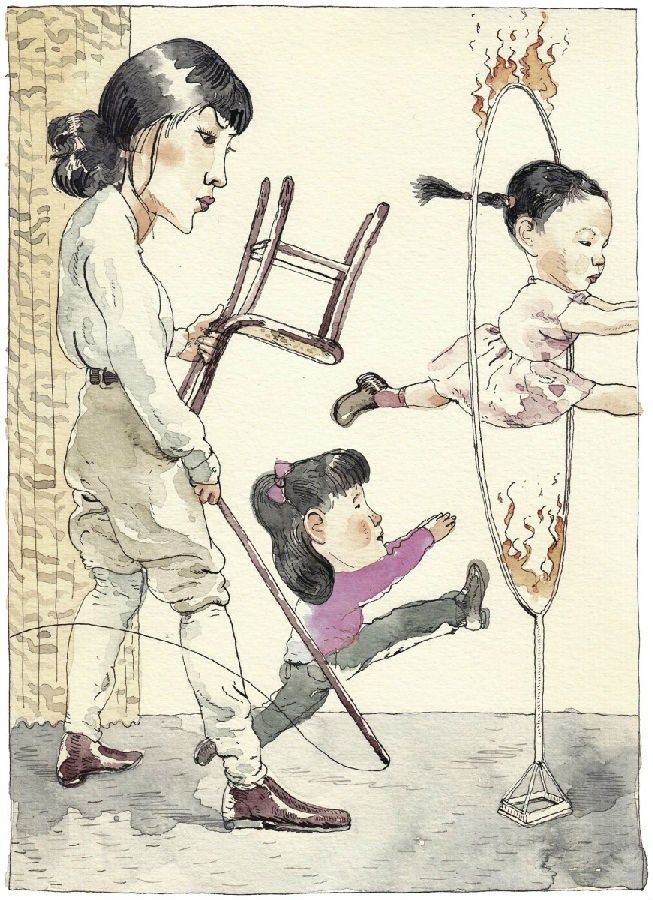 Americans perceive tiger moms to be highly controlling, strict, and severe almost to the point of abuse.

Amy Chua, the most well known tiger mom, is simply forcing her children toward parentally-defined success, which most believe is unlikely to lead to true happiness in children.

In the American media, the tiger mom's strict and harsh style has spurred a controversial conversation surrounding parenting.

At the center of this controversy lies the question of whether happiness and the pursuit of the child's own dreams and interests are more important than the pursuit of success as defined by the parent.

There are some characteristics of Chinese parental love, compared with the American counterparts.

Chinese parents are more likely to think children are vulnerable and dependent. Chinese parents will do everything they can for their children instead of encouraging them to develop independence.

American parents use more compliments and encouragement to help a child develop while it's the opposite for Chinese parents. Chinese mother never says things like, "Congratulations" or "I am proud of you".

Everything is changing, and people are more open to Chinese way of education. Some internet users have discussed the differences of the Eastern and Western parenting styles.

– I think it has to do with society. From my understanding, eastern cultures place a lot of emphasis on community and family. Western cultures are much more individualistic.

– Eastern cultures (from my understanding) are more communal. You help the community progress, and in doing so, you will progress yourself.

– I fervently believe that both eastern and western parents expect to be obeyed by their children until they are adults and the means they use to obtain proper decorum, when they demand it, get their children to pick acceptable careers, and who they date may be different, but they all do it to some degree.

– From what I understand eastern parents tend to use guilt rather than punishment more often. Some western parents do this as well.

– It is likely true that in general American parents often (but not always) tend to be more liberal and less strict than Eastern parents.

– It is also true that in general American offspring are often (but not always) less likely to take care of their parents, financially and personally in their old age.

– I believe this is about different style of love. Chinese parents are lenient with young children', this is love; westerners force their children to think independently, this is another style of love.

– And things are always changing, nowadays, many Chinese elders want to have their own lives, not to depend on their children.