Company under fire for an iPhone 7/7s ban on employees

A company in central China's Henan province said they will reconsider their new policy to dismiss any employee who buys an iPhone 7 or iPhone 7 Plus, which has caused an uproar on Chinese social media, Henan based Hnr.cn reported. 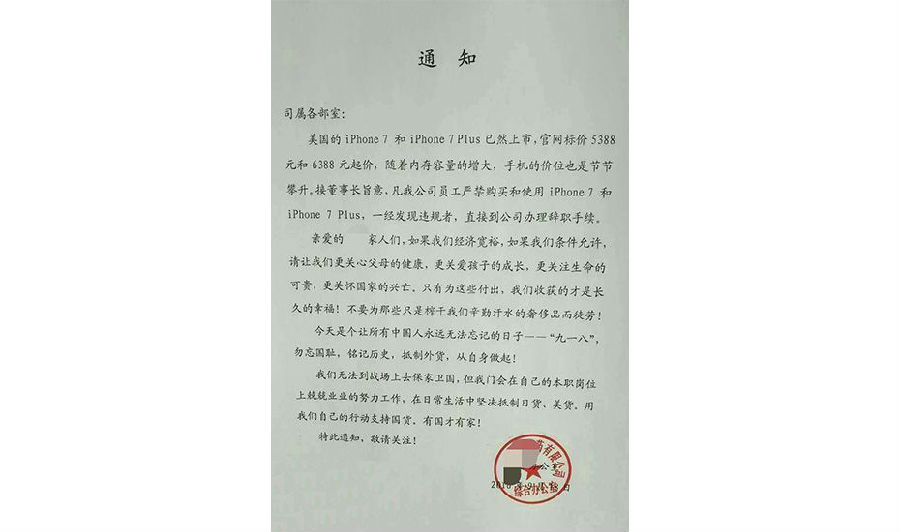 "Our company forbids all employees from using or buying the iPhone 7 and iPhone 7 Plus. Whoever is found in violation of that rule will be immediately forced to resign," read a notice released by the company on Sept. 18. The notice also called for employees to stop buying other U.S.- and Japan-made products, and to support domestic products instead. The ban was deliberately made public on Sept. 18, the 85th anniversary of the 1931 incident that triggered Japan's bloody, 14-year invasion of China.

"If we have some disposable income, and if conditions allow it, let's [use the money to] take better care of our parents' health. Let's pay more attention to our kids' growth, to the value of life and to the prosperity of our country," read the notice. The report by Hnr.cn did not give the name of the company.

Since its release and subsequent media exposure, the rule had become the seventh hottest topic on Sina Weibo as of 10 a.m. on Sept. 21, with more than 6 million Weibo users viewing the discussion. Some netizens accused the ban of being "barbarous and coercive." User "AND_YOUwu" commented, "It is my own freedom to determine what phone to buy," while another user, "Dunduner," wrote, "A company with such a narrow-minded [idea of] patriotism will soon collapse."

At the same time, the ban did have its supporters.

"After all, [the ban] comes from a good place, aiming to support made-in-China products and family values," said Weibo user "Zaijian…Xiaodingding."

An employee from the company surnamed Liu told Hnr.cn that the notice was issued directly by the company's chairman, who had read extreme stories about Chinese people being so desperate for iPhones that they traded their own organs for money to buy the phones. The chairman didn't want his own employees to face such pressure. The chairman also hoped that the date of the announcement would stir up employees' patriotism.

"I will tell the chairman about public opinion toward the rule, and suggest that he reconsider it," Liu said.

Legal experts told Hnr.cn that such a ban is actually against China's Labor Law, and doesn't have the legitimate power to void a working contract.