The folk legend about the Mid-Autumn Festival 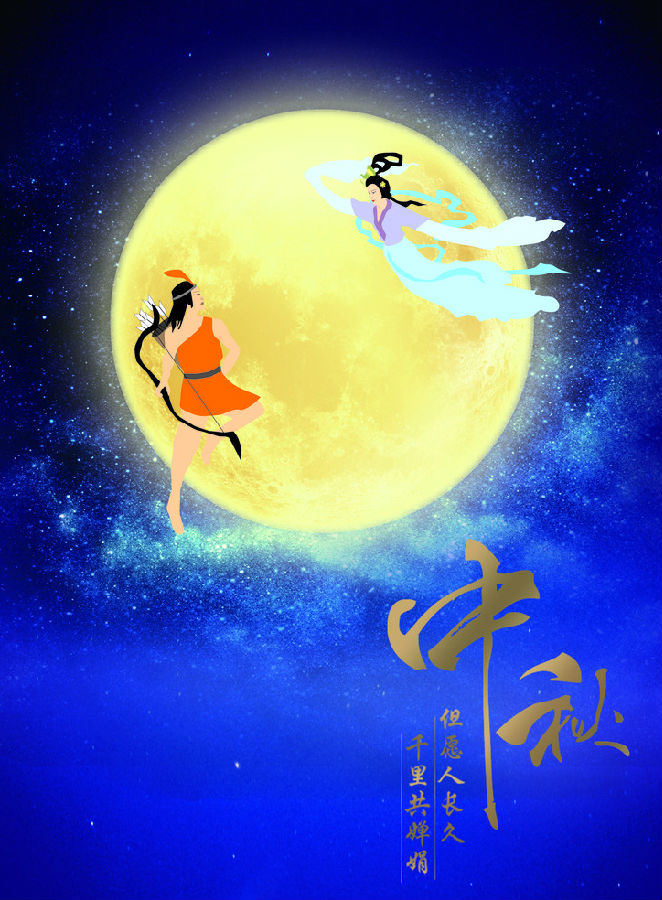 1. Chang'e and Hou Yi — Love Story of a Beautiful Lady and a Hero

Pictures of a Beautiful Lady and the Moon — Who is She?

You can see many pictures about the Mid-Autumn Festival when you Google this festival's images. The pictures usually contain a beautiful woman and a bright moon. The woman is in ancient dress and is usually stepping on a white cloud. Who is she? She is the leading lady of this sad love story.

Hou Yi was an excellent archer. Chang'e was his wife.

Long, long ago, there were 10 suns in the sky. The suns burnt all the plants on Earth. People were dying.

One day, Hou Yi used his bow and arrows to shoot down nine of them. All the people on Earth were saved.

The Queen Mother of the West gave Hou Yi a bottle of elixir that could make him immortal. But the elixir was only for one person. Although Hou Yi did want to become immortal, he wanted to stay with Chang'e more. Therefore, he didn't drink the elixir and asked Chang'e to keep it safe for him.

Hou Yi became more and more famous after he shot down the nine suns. People wanted him to be their master and most of them were accepted by Hou Yi.

Not every student of Hou Yi had good morality. Pang Meng, one such student, wanted to seize his elixir.

One day, Hou Yi went hunting with his students, but Pang Meng pretended to be ill and stay at home. After making sure Hou Yi had gone, he went to Hou Yi's house and tried to force Chang'e to give him the elixir. Chang'e knew she couldn't defeat Pang Meng, so she drank the elixir immediately.

The elixir made her fly higher and higher. In the end, she stopped on the moon. She became immortal.

Hou Yi was very sad when he received the news. He came back home and moved a table under the moon, preparing some food on it. He hoped Chang'e could come back to stay with him.

Since then, during the Mid-Autumn Festival, people have offered lots of food to worship the moon.

Children Still Believe That a Beautiful Lady Lives on the Moon

Most children in China believe that Chang'e is still living on the moon. And on the night of the Mid-Autumn Festival, when the moon is bright, children try their best to find the shape of Chang'e on the moon.

2. Wu Gang Chopping the Cherry Bay — He Could Never Cut It Down

Shadow on the Moon of a Huge Tree

When you look at the moon on a clear night, you can see there is a shadow on it. Although it has been proven that the shadow is actually mountains that were generated by a meteor, a Chinese legend says that is the shadow of a huge tree on the moon.

Wu Gang was an ordinary person who wanted to become immortal but didn't work very hard, and he never tried his best to learn the necessary theurgy.

This time, Wu Gang was very serious and worked hard on chopping down the tree. But you know what? He could never finish his work because the cherry bay was healed every time that Wu Gang chopped it.

Wu Gang wouldn't give up. He tried time and time again, and is still trying now. On clear nights, people can see an obvious shadow on the moon. This is made by the huge cherry bay.

There are three animals living in a forest: a fox, a rabbit, and a monkey.

One day, the Emperor of Heaven wanted to test the animals' virtues. So he came to Earth and changed his appearance to that of an old man.

He said, "I heard that you three are good friends, so I came a long way to meet you. Now I am very hungry. What will you offer me?"

"Please wait here. We will come back with food soon." Then the three animals went their separate ways to find food.

The fox caught a fish in a river; the monkey got fruit in the forest; but therabbit got nothing and came back with nothing.

The old man said, "It seems that you three are not united and work alone. You two kept your promise and brought back food. But the rabbit hasn't brought back anything."

The rabbit felt very sorry. "Please help me to get some firewood. I want to cook some food for him," she said to the fox and monkey.

After they set the firewood on the fire, the rabbit said, "Sorry I didn't fulfill my promise. But I can give myself to you. Eat me, please!" and the rabbit jumped into the fire.

The Emperor of Heaven was deeply moved by the rabbit. He picked up the rabbit's bones and said, "I was so touched. To honor her, I will let her go to the Moon Palace, so that people can see her forever."

0 responses on "The folk legend about the Mid-Autumn Festival"