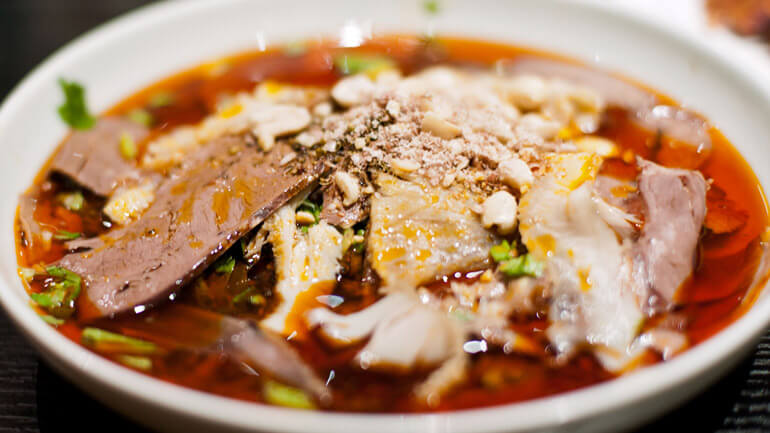 The story goes that a married couple in 1930s Chengdu made this classic Sichuan cold dish so well, it led to the preparation being named "husband-and-wife lung slices." Paper-thin poached beef and beef offal – ox heart, lung, and finely feathered tripe – are served liberally dressed with chili oil, Sichuan pepper, black vinegar, and sesame oil. A scattering of peanuts and finely sliced scallions adds crunch. The chilled meat and cooling cilantro are sharply contrasted by the searingly hot chili oil, with added complexity from numbing, citrusy Sichuan peppercorns and malty vinegar. In Chengdu, the epicenter of Sichuan cuisine, you'll find this dish served as a prelude to a meal in many of the city's cangying guan (hole-in-the-wall or "fly" restaurants), where diners flock like flies for cheap, tasty eats. 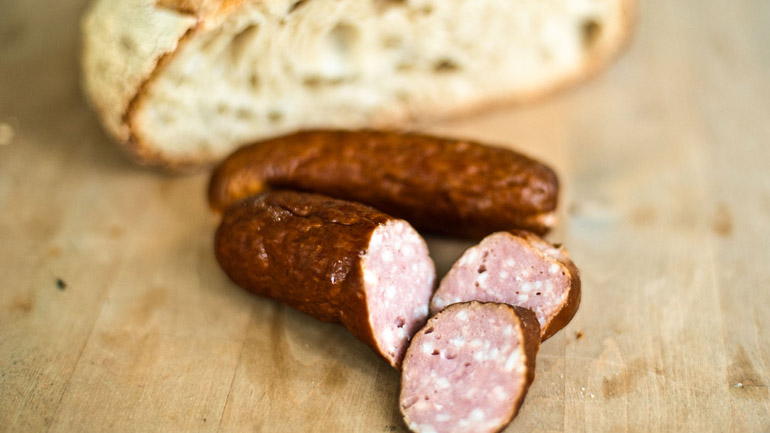 I know, I know, this doesn't look anything like Chinese food. Which goes to show the breadth of influences at play in the country's cuisine. In China's far-north province of Heilongjiang, bordering Russia, lies the city of Ha'erbin, famed for its annual ice festival. A century ago, Russian migrants fleeing the revolution found a safe haven in Ha'erbin, and, although few of their descendants remain, their food culture has left its indelible imprint on the city. This pork sausage, known as hong chang, or "red sausage," is smooth-textured and finely studded with fat, with a slightly sweet and pleasant smoky flavor. It's eaten with local dalieba sourdough bread and creamy Ha'erbin cow's milk butter – this is one of the few places in China outside the Tibetan regions where butter is eaten. It's a dish that feels somehow fitting in this remote part of China, as you're standing below the copper-green onion domes of the Saint Sophia Cathedral in the main square. 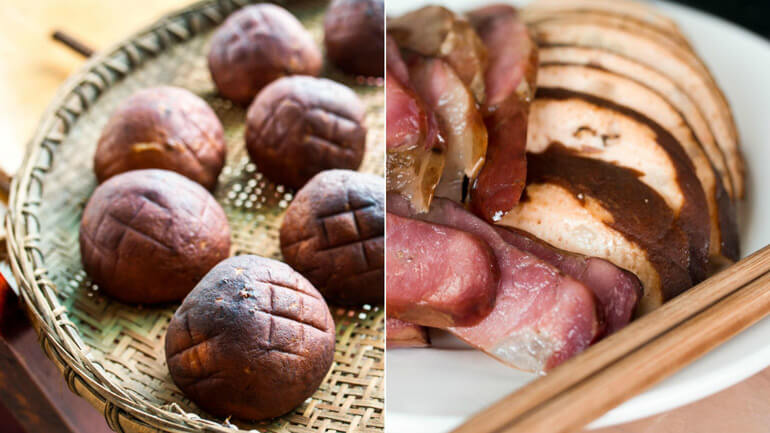 In winter, when the Miao people of Guizhou province slaughter a pig for feasting, not a drop of blood is wasted. The blood is mixed with tofu and tiny pieces of bacon to make xue doufu, orange-sized balls that are air-dried on woven bamboo trays for several days, then lightly smoked indoors over the family fireplace and served in slices as an appetizer. The texture recalls a soft sausage like mortadella, with a smoky rind and mild pork flavor that suddenly intensifies when you bite into one of the salty pork belly pieces. It's a seasonal delicacy, usually eaten only at Miao New Year as part of a many-course feast that begins with sliced sausage and blood tofu; continues with fried fish, braised duck, duck blood congee, and stir-fried green peppers; then ends with fireworks and fiery rice liquor. 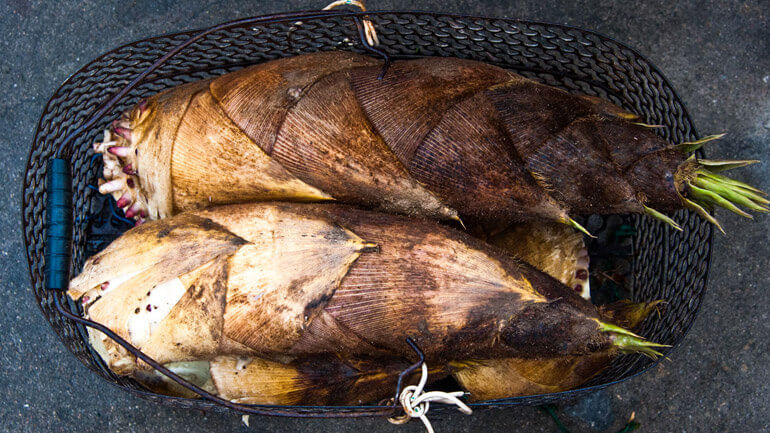 Anhui, in China's east, is famous for its bamboo forests – it's where the epic bamboo fight scenes from Crouching Tiger, Hidden Dragon were filmed. Bamboo forests mean bamboo shoots, fresh and green in early spring but larger and full-flavored in winter. Each shoot, the size of a rhino horn, is dug from deep under the earth on steep hillsides covered with feathered jade bamboo forests. Below the towering green bamboo canopy, a tiny visible tuft is often the only clue to the underground presence of a sizable shoot. Bamboo is common in many of Anhui's dishes, and the region's cold mountain mists are dispelled with a warming bowl of bamboo shoot and ham stew, heated in a deep pot on a burner. Larou sun bao ("bao" meaning both the pot and the method of slow cooking over a low flame) features the local air-dried ham, pink and intensely flavored, and tender, finely sliced bamboo. Despite cooking, the bamboo shoots retain a slight crunch and taste like freshly cooked baby corn, while their starchiness lends a milky quality to the broth. 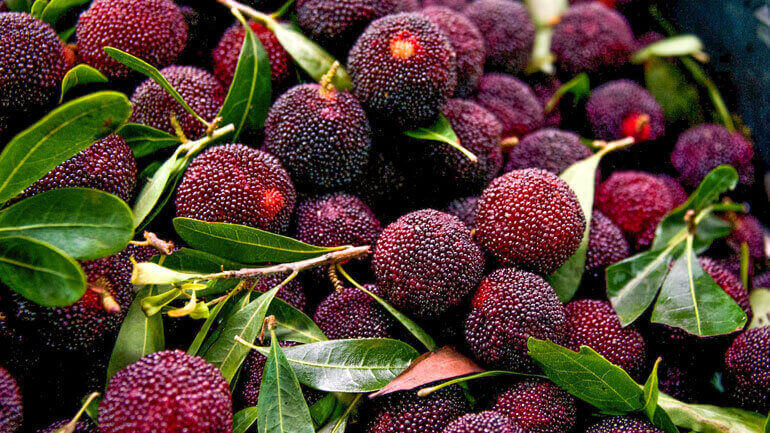 Summer in China brings the yang mei, also known as the Chinese bayberry. They have grown in China's warmer mountainous provinces for over two thousand years, and I've plucked them wild from trees in Guangxi and Yunnan. With a color varying from dark red to deepest purplish black, the wild versions are tart and sour. The cultivated fruit, on the other hand, is sweet, with a taste most similar to a mulberry: luscious and a little tart. In the center is a soft seed, surrounded by thousands of tiny globules, each one bursting with juice in your mouth. The berries are used to flavor the local rice wine, or simply eaten fresh. 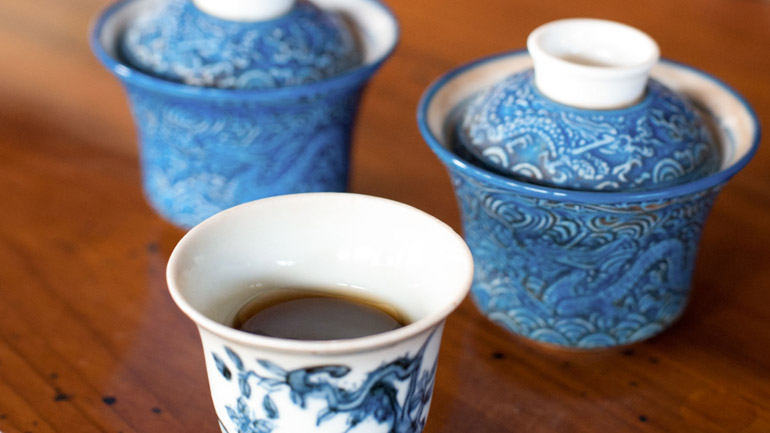 Drinking pu'er tea means you have come of age as a tea drinker in China – it's something you drink only after you've worked your way through white and green teas, then oolongs, to reach the fully fermented, fully oxidized tea of southern Yunnan. Pu'er's complex flavors and aromas – its hints of forest floor, wet leaves, stones after rain – are shaped by the altitude, soil composition, drainage, and amount of sunshine and rainfall in the place where it's grown. These earthy, mineral qualities are enhanced by aging the tea for anything from a year to more than a century. And, like good aged wine, premium aged pu'er is something mere mortals like myself are unlikely to ever drink, except at the hand of a generous friend. I was fortunate enough to meet a pu'er grower in rural Yunnan who let me taste some of her collection of these extraordinary and complex aged teas, some of them 50 years old, and it was a gift I can never repay. 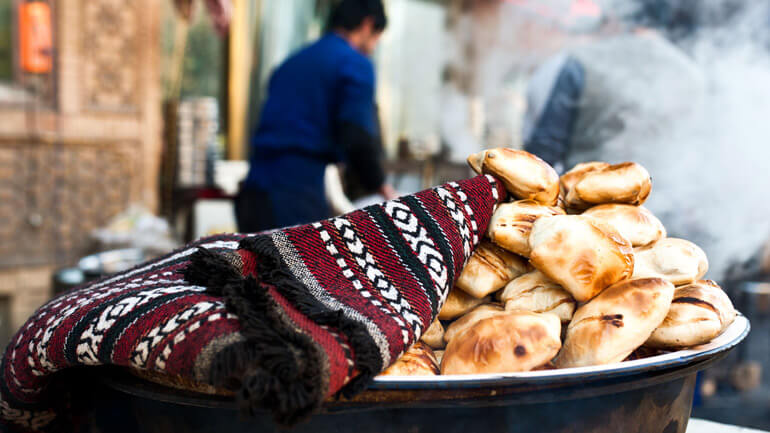 On my first visit to Kashgar, in far-west China, I sat down at a street stall where three Uyghur men were making samsas, unleavened pockets of wheat dough that are filled with mutton, folded over like envelopes, and then baked in a deep outdoor pit oven called a tanur. Unable to speak the local language, I held up my fingers for three and poured myself a bowl of saffron-colored tea. Nearby, a group of men wearing embroidered green prayer caps dug into an order of their own, breaking off pieces of salt-flecked crust to scoop out the meaty filling. When my samsas arrived, puffed and scorched from the tanur, I followed suit, tearing one open so the blistered brown skin crackled and steam shot out. Inside were small, tender pieces of mutton and glistening morsels of perfectly seasoned mutton fat, meltingly soft and deeply satisfying. Xiao long bao may be my favorite street food in China, but samsas are certainly the open-air highlight of Kashgar. 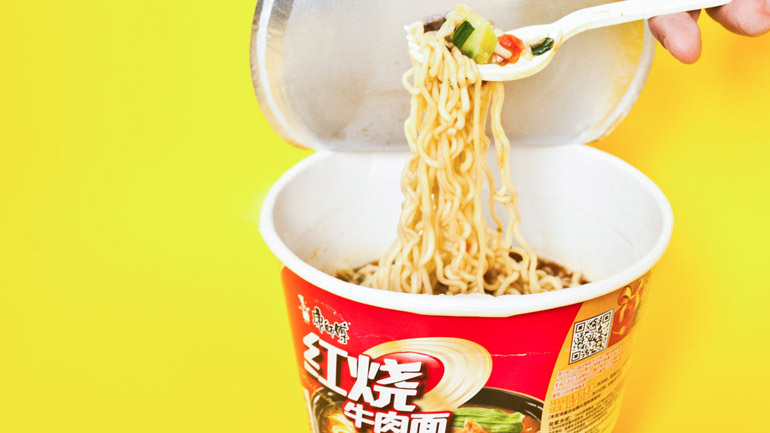 If you travel between any two points in China by plane, road, or rail, it's virtually inevitable that you'll encounter delays, complications, and a bowl of fangbian mian, or "convenience noodles." Travelers huddle together around the hot-water faucet in the gas station, or at the end of the railway carriage, each carrying a brightly colored cardboard container – red for spicy, green for vegetarian, or orange for seafood flavor.

I inevitably go for red, tearing the foil lid off a box to find three or four mysterious sachets atop crimped noodles. These I add one by one – dried vegetables and meat, chili oil, salted black beans, tallow, or MSG. There's a hiss as the boiling water hits the noodles before I'm enveloped by beefy, spicy aromas. As I wait for the noodles to soften, foil lid folded back over the rim to keep the heat in, I click and unclick the folded plastic fork and wonder for the millionth time why the packets don't come with chopsticks instead. The noodles taste of salt, mostly, and of new horizons. And I keep on eating them, because it wouldn't be a proper journey without.