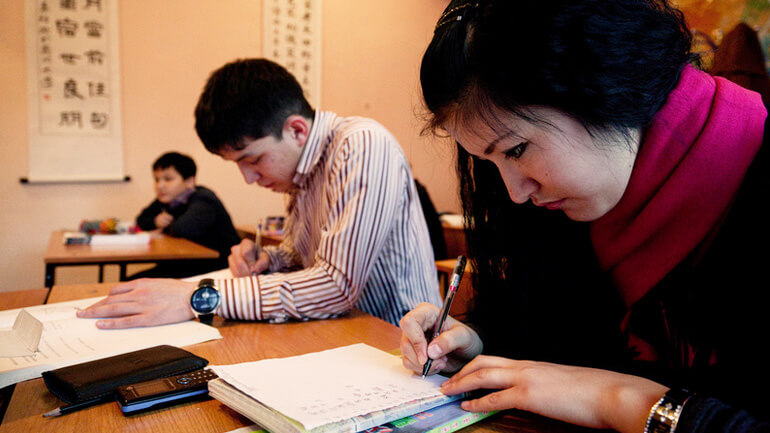 "China is the key for your future," reads a notice pinned to the wall, jostling for attention alongside a toy panda, Chinese wall hangings, and plastic bamboo.

On a Tuesday evening at this Almaty language school, several small groups are engaged in learning Chinese.

Viktoriya Nazarchuk, a 33-year-old painter, says she became interested in the language through an enthusiasm for Chinese calligraphy. Like most students of Chinese in Kazakhstan, however, she also has an eye on Beijing's growing economic clout.

"We need to get acquainted with their culture, history and language," she says. "When my level is high enough I plan to teach my little son Chinese, too. He will need it in his future life."

As China's economic power in the region grows, Ms Nazarchuk is one of a growing number of central Asians looking to learn Chinese. Nurzhan Baitemirov, founder of East-West Education Group, which owns the language school where Ms Nazarchuk is studying, says his focus is shifting. The company once specialised in teaching English to Kazakhs, but it is now increasingly educating them in Chinese.

"West Kazakhstan used to be Canadian companies, but they have shifted and it is now majority Chinese companies. It's better if you speak Chinese if you want to get a position," says Mr Baitemirov, who has a masters degree from Wuhan. The number of students learning Chinese is increasing by 5 per cent a month, he estimates. "Parents do understand that if their child has a good education in Chinese they have good job prospects," he says. "They're seeing there are a lot of Chinese investments here."

The number of Kazakh citizens studying in China has risen more than fivefold in the past decade to 12,000, according to the China Scholarship Council, a government body that helps overseas students study in China. Beijing, meanwhile, has set up 11 Confucius Institutes to promote Chinese language and culture in the five Central Asian "stans".

Even Kazakhstan's first family has endorsed learning Chinese: Dariga Nazarbayeva, deputy prime minister and daughter of the country's president, in February said that Kazakh children should learn Chinese in addition to Kazakh, Russian and English. "China is our friend, our trading partner and the biggest investor in the economy of our country," she said. "In the near future, we all need to know Chinese."