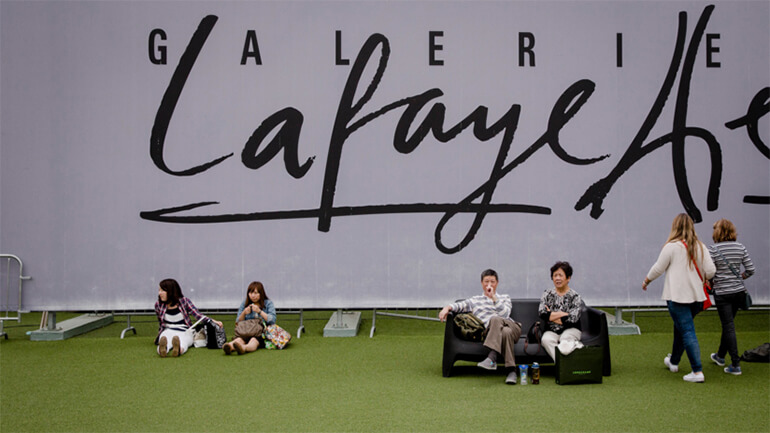 Chinese tourists at the Galeries Lafayette department store in Paris.

Although China's slower economic growth, crackdown on gifting and weaker currency have ended the days of breakneck growth for the country's luxury market, the global brands invested there are not panicking. They say China, as the world's largest market, still looks likely to continue to make up for weaker demand elsewhere.

A younger and more sophisticated generation of shoppers with markedly different tastes, aspirations and consumption habits is reshaping the landscape of luxury in China. Educated, well-traveled and tech-savvy, they are emerging as the new target market.

A decade ago, when most Chinese only knew of two kinds of wine (red and white) and demand for luxury products was just beginning, skeptics voiced doubts that shoppers, wealthy or not, would forgo the ubiquitous counterfeit goods found in Shanghai's Xiangyang Market or Silk Alley in Beijing. Others said that the Chinese would just choose the biggest brands.

They were wrong, of course. Today, Chinese shoppers account for nearly half of the global luxury market, providing invaluable demand to brands in every segment.

"In the past, luxury goods were seen as a symbol of wealth and status for Chinese consumers," said Dr. Tina Zhou of the Shanghai-based Fortune Character Institute, a luxury research consultancy. "Now they buy luxury goods for their own enjoyment."

Estimates of the size of China's luxury market vary depending on which items analysts consider to be luxury goods. Data from Fortune Character Institute has China's luxury spending in 2015 at $16.8 billion, up 9 percent, year on year.

Bain & Company's 2015 China Luxury Market Study put the value of the Chinese luxury market last year at $17.3 billion, which it calculated to be a drop of 2 percent.

Regardless of how luxury is defined, there are some visible trends that are shaping the direction of luxury consumption in China. A shift away from visibly branded goods to a focus on quality has hurt sales of many brands with strong name recognition, while strengthening other players.

"Our research found that 39 percent of wealthy Chinese think the logo is no longer the priority," Dr. Zhou said. "Niche high-end brands as well as bespoke products, as a result, are becoming new drivers of luxury consumption."

And this focal shift to younger shoppers who have absorbed luxury marketing since childhood — and are seeking something different from the LV-emblazoned bags and Burberry plaids of their parents' generation — has profound implications, at least in the short term, for established brands.

Mr. Keith described today's typical Lane Crawford customer as female, between the ages of 25 and 35 and interested in ready-to-wear. Women's wear is the fastest-growing portion of the company's mainland China business, accounting for 50 percent of sales, he said.

"Today our customers are more confident, and they have much more of an understanding of lifestyle," Mr. Keith said. "It's not just about purchasing, it's about the experience."

A big part of the experience is shopping while traveling. Not long ago, Hong Kong was a preferred destination for luxury shopping, he said, but today Tokyo and Europe are more important. Currency exchange rates play into this, as does the trend toward foreign travel.

Although its bricks-and-mortar presence is limited to Beijing, Chengdu, Hong Kong and Shanghai, Lane Crawford has a broader reach among the new Chinese luxury shoppers with an omnichannel approach that integrates store and online experiences. Customers who shop both in stores and online tend to spend five times as much and shop five times as often as other Lane Crawford customers, he said.

"We have always approached online as part of the store experience — the sweet spot for us is how we use our omnichannel experience to increase loyalty," Mr. Keith said. "We can penetrate the market fairly effectively in second- and third-tier cities where we don't have a physical presence."

The rise of new global Chinese shoppers also has been a boon for Lane Crawford's online business, he said, with Chinese customers accounting for 40 percent to 50 percent of transactions outside of Greater China, which includes the mainland, Hong Kong and Macau.

But not all Chinese luxury purchases abroad involve travel. The fact that a luxury item in China can cost as much as 80 percent more than the identical item in Europe — the result of exchange rates, taxes and duties — has continued to help the daigou, or proxy purchase, services. These traders traditionally have taken orders — and continue to do so now from online sites — for purchases in Europe and then ship the goods to China, saving the end customer a significant amount, compared with prices in Chinese stores.

In an industry report released last June, researchers at the Geneva-based Exane BNP Paribas said that prices in China and Europe would have to converge as the Chinese luxury market matured. "Chinese luxury demand seems to have been dramatically impacted by foreign exchange rates and the widening price differences between China and the rest of the world," said Luca Solca, managing director and sector head, global luxury goods at Exane BNP Paribas. "A larger portion of Chinese consumers spend their luxury dollars abroad — either directly as tourists or indirectly through daigou websites."

More recently, the Chinese government has tried to recapture part of this business, Mr. Solca said, in an effort to increase tax revenues and stem capital outflows.

"Stricter border controls have been introduced to curb daigou activities and renewed pressure has piled up on European luxury players to reduce the price gap against the Chinese," he said. "More than ever, we expect prices to continue to converge in fiscal year 2016."

Describing the daigou effect as "rather disruptive," Mr. Keith said that the price gap is a liability for brands. "Ultimately, it undermines the trust of the customer in your product."

The digital space is likely to continue to disrupt the Chinese market. Fan Chen, the Beijing-based managing director at the marketing consultancy Simon-Kucher & Partners, said she expected more brands to engage Chinese consumers directly online, noting that Burberry opened a store in late 2014 on tmall.com, the business-to-consumer site operated by the Chinese online giant Alibaba.

Cartier introduced its online shopping site in October, and other brands have made similar moves.

"The rapid development of China's mobile e-commerce can certainly, to some extent, promote sales of luxury goods, but more from a marketing perspective," Ms. Chen said. Looking forward, the clout of Chinese brands is likely to grow, she said.

"The current market share of local luxury brands is still relatively small, but it is developing," she said, noting the foundation laid by Chinese brands including Shanghai Tang and Chow Tai Fook, two large Hong Kong-based labels in fashion and jewelry, respectively. "There is still much room for growth for Chinese brands."

Lane Crawford also sees potential in Chinese brands. Its "Created in China" program has served as an incubator and showcase for emerging Chinese fashion brands. The program now features the work of 20 Chinese designers.

"Our Chinese customers are inspired by the new generation of Chinese talent," Mr. Keith said, naming the labels Ms. Min and Comme Moi as top performers. "China for us is really a long-term play."