Samdzong findings: Silk road may be longer than thought

It was the route along which fine cloths, spices and riches flowed between Europe and East Asia for hundreds of years. But new analysis of textiles and dyes found in a tomb complex in Nepal suggests the Silk Road may have extended further south than previously believed.

Archaeologists found a gold, silver and cloth funerary mask discovered in the Samdzong tomb complex in Nepal had been made with materials from north-east Asia between 400AD and 650AD. 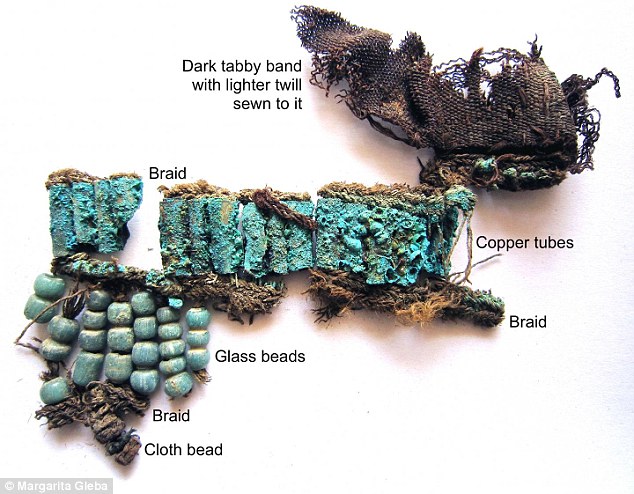 Alongside the funerary mask was some wool that included copper, glass and cloth beads (pictured).

Dr Gleba said: 'There is no evidence for local silk production suggesting that Samdzong was inserted into the long-distance trade network of the Silk Road.'

'The data reinforce the notion that instead of being isolated and remote, Upper Mustang was once a small, but important node of a much larger network of people and places.

The cloth used in the funerary mask was found to contain silk but also Indian dyes such as munjeet and lac, which suggests the materials had been imported from China and India. The Silk Road was an ancient network of trade route that ran through central Asia connecting China to the Mediterranean Sea. It was initially named after the lucrative trade in Chinese silk but other precious items such as jade, gold, silver, bronze and spice were also transported initially between China and Egypt, then later to ancient Greece and Rome and eventually to Medieval Europe.

While many sea route were opened up by sailors to transport goods, merchants crossing overland were thought to have travelled by northern and southern routes that bypassed the Takliamakan Desert in north west China.

The southern route ran through the Karakoram mountains that sit on the border of Pakistan, India and China.

They merged again near Merv in Turkmenistan before continuing west to the south of the Caspian Sea.

But the cloth discovered in the tombs near the village of Samdzong in the Mustang region of Nepal suggest merchants may have also extended their route further south still.

At a height of 13,100ft (4,000 metres), the cloth was exceptionally well preserved alongside the remains of the ancient people who were buried in tombs cut into the mountainside in Samdzong. The tombs were cut into the cliff face in Upper Mustang (similar caves above a monastery in Lo Manthang,

Nepal pictured) more than 13,100ft up, where the dry cold air helped to preserve the cloth

The man-made remains were only exposed to view in 2009 when an earthquake caused the façade of the cliff to calve off. One segment of cloth found in the tombs was made of wool with copper, glass and cloth beads attached to it.

It was found near a coffin of an adult alongside the spectacular gold and silver funerary mask. The mask has small pinholes around its edges, suggesting it had been sewn to a fabric and was perhaps part of a piece of decorative headwear.

Writing in the journal Science and Technology of Archaeological Research, Dr Gleba and her colleagues explain how analysis found a range of organic dyes on the cloth. They said turmeric, knotweed indigo, Indian lac and munjeet were all found on the cloth along with cinnabar.

They said: 'The results indicate that locally produced materials were used in combination with those likely imported from afar, including China and India.'

0 responses on "Samdzong findings: Silk road may be longer than thought"