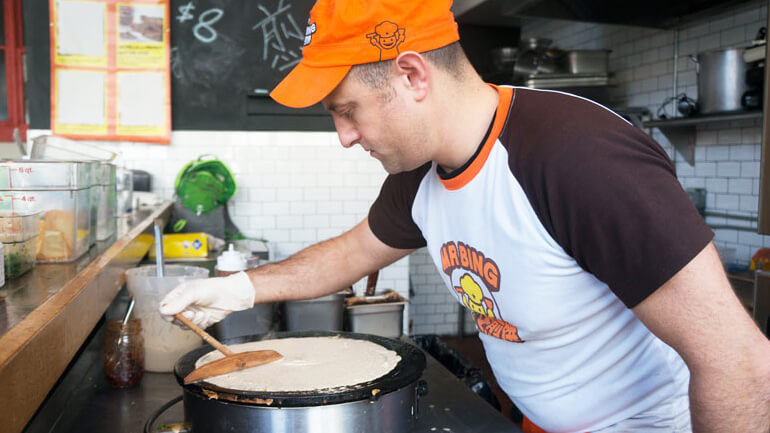 Mr. Bing, i.e. Brian Goldberg, was born in New York City during the 1977 blackout and soon after fell in love with Chinese food. His high school girlfriend's family owned Chinese restaurants and, "like a good Jewish family," he and his parents would eat at a local spot called Fortune Garden every Sunday night.

While studying abroad in Beijing, Goldberg became "obsessed" with Chinese street crepes, which he'd eat from a vendor parked outside his dorm room every morning. And afternoon. And evening.

A major in Chinese at Brandeis led to a master's in East Asian studies at Columbia, where Goldberg also enrolled in business classes. As part of an assignment, he wrote a business plan for Goldberg's Chinese Crepes, a franchise of street carts that would sell the food couldn't find in America. Goldberg's Chinese skills eventually led him to work as a reporter in Singapore and a trader in Taiwan.

But moving other people's money around didn't satisfy Goldberg's entrepreneurial spirit, so he opened a small cafe in Hong Kong. After tasting 40 different street crepes in Northern China, Goldberg settled on his favorite and purchased the recipe from a young street vendor. He then flew the vendor to Hong Kong so she could teach Goldberg how to make crepes for the first Mr. Bing's.

In America, most Chinese cuisine was influenced by immigrants from southern China, and Goldberg, who had spent 14 years abroad, was eager to bring some tastes of northern China back home.

"I really wanted to make something and create something that I could leave in this earth," Goldberg said of bringing jianbing to New York, "When people hear crepes, they want Nutella." Indeed, there is a Nutella bing on the menu, in addition to a Peking duck bing and a pork bing. In China, it's rare that any meat is used in a jianbing, but hey, Americans love their meat.

Mr. Bing launched in New York as a pop-up at UrbanSpace's holiday market and has returned, this time downtown at 10 Kenmare St. through March 31, with plans to find a new permanent home in the city. The shop is open from 11 a.m. to 10 p.m., and bings cost $8-14.