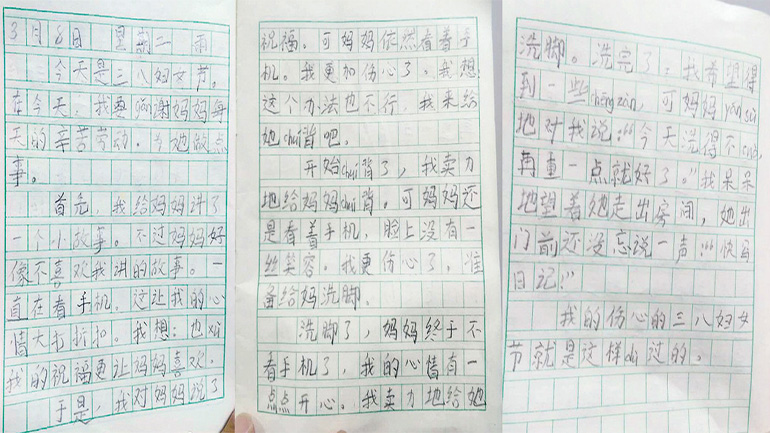 A pupil's diary describing how his cellphone-obsessed mother ignored his efforts to express his gratitude for her on International Women's Day has become an online sensation.

The boy, a second grader at a primary school in Taizhou City, east China's Zhejiang Province, wrote the diary on March 8, a day when China holds various activities to promote respect and love of women.

The boy's teacher Wang Yuwei asked students to do something to show their gratitude towards their mothers — anything from singing a song or just expressing a good wish.

In the diary, the boy wrote that he first told a story to his mother, but she seemed uninterested and stared into her cellphone. Sad but not discouraged, he then said recited some blessings, yet his mother remained occupied with her handset. Seeing that, he chose to massage her back.

"My mother was still looking at her cellphone, without a trace of a smile on her face, and I felt sadder," he wrote in the diary "Heartbroken Women's Day".

His mother told the newspaper she felt ashamed after reading the diary and vowed to spend more quality time with her son.

A random interview with students at the school found nearly 70 percent say their parents are often distracted by their phones.

Zhu Huizheng, deputy headmaster of the school, has urged parents to pay close attention to family education because they are the first teachers to influence children.