Feasting your way through Yunnan Province (1) 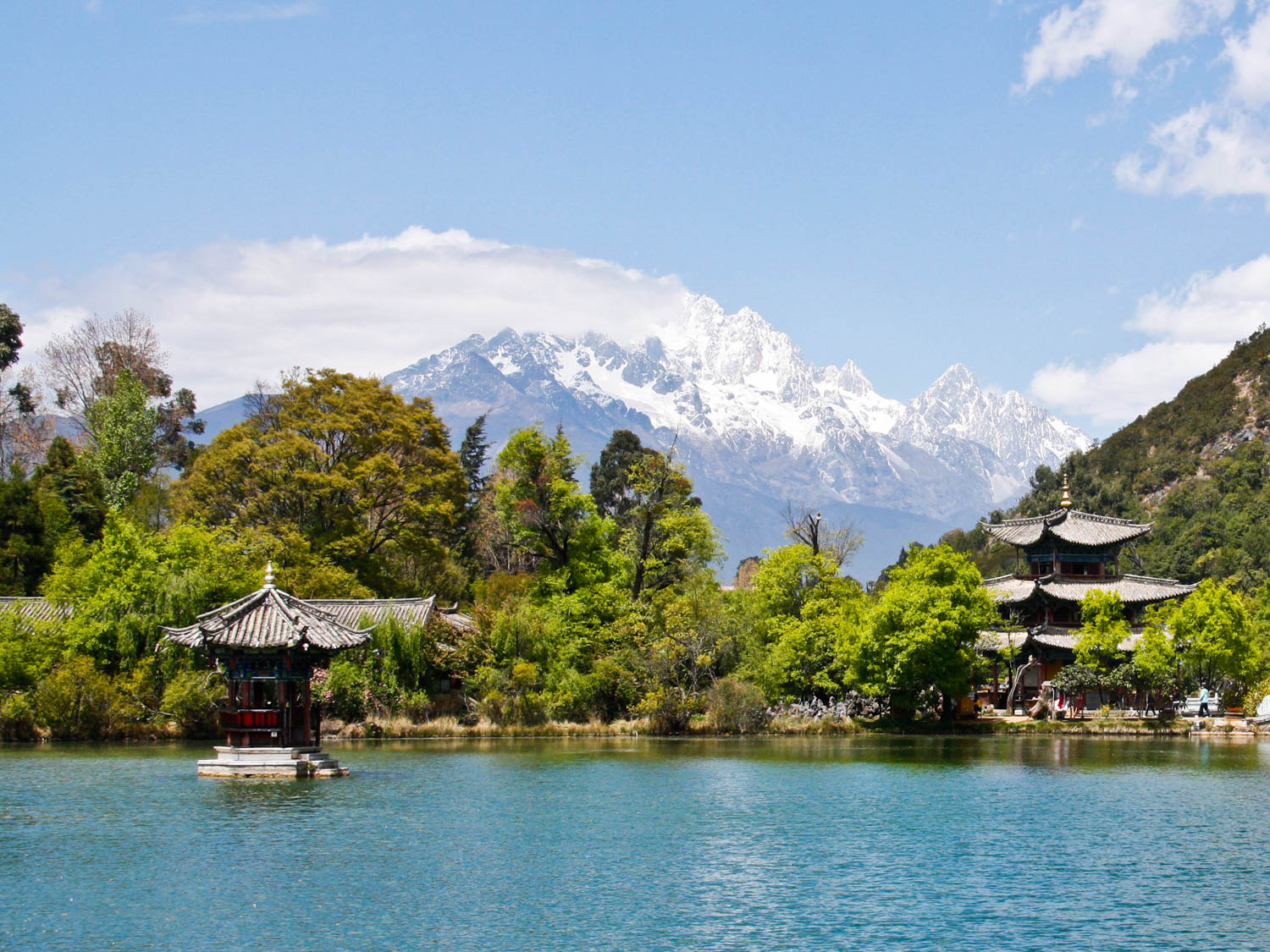 Happily, Yunnan doesn't disappoint. The southwestern province tumbles downhill along three deep river canyons, splaying out to the borders of Myanmar, Laos, and Vietnam, just above sea level. The canyons, side by side, are like drinking straws, sucking up and trapping the humid, tropical air of the Pacific and Indian Oceans. Over the coming weeks, we'll explore the lush landscape, which is home to more than half of the country's plant and animal species. This bounty of ingredients makes its way into a stunning array of dishes, for a diverse, category-defying cuisine inflected with both the flavors of neighboring countries and the culinary traditions of the ethnic minorities who call Yunnan home. 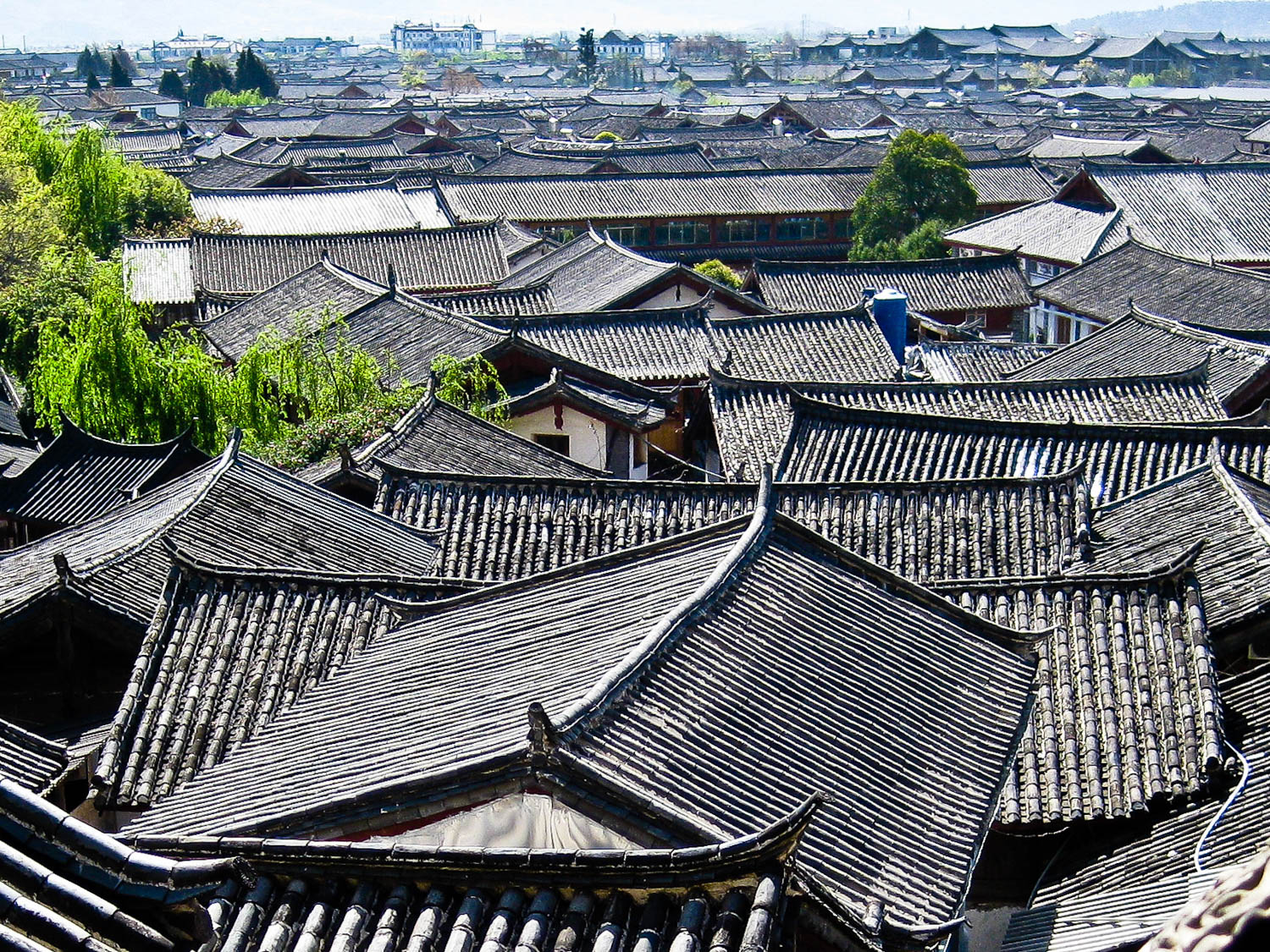 We eat our first Yunnan lunch in the small northern city of Lijiang. The surrounding land is green with pine forests, and everywhere is the rich, earthy smell of good soil planted with walnut and apple trees and corn. Lijiang itself is a puzzle of cobblestone lanes and ancient houses with black-tiled roofs, populated by the Naxi, Lijiang's largest ethnic group. All around us, women wander to market, baskets on their backs, in their distinctive chestnut, blue, and white garb.

We find a small restaurant with simple wooden tables and trestle seats overlooking a stream, and settle in to eat. It's quiet and empty, and the owner doubles as chef and waiter. When he takes our order, I want nothing more than some Chinese comfort food—warming and familiar noodles and soups. But Matt and the girls have other ideas.

"We'll have the fried dragonfly nymphs, the bamboo larvae, and the fried honeybees," says Matt, examining the menu. 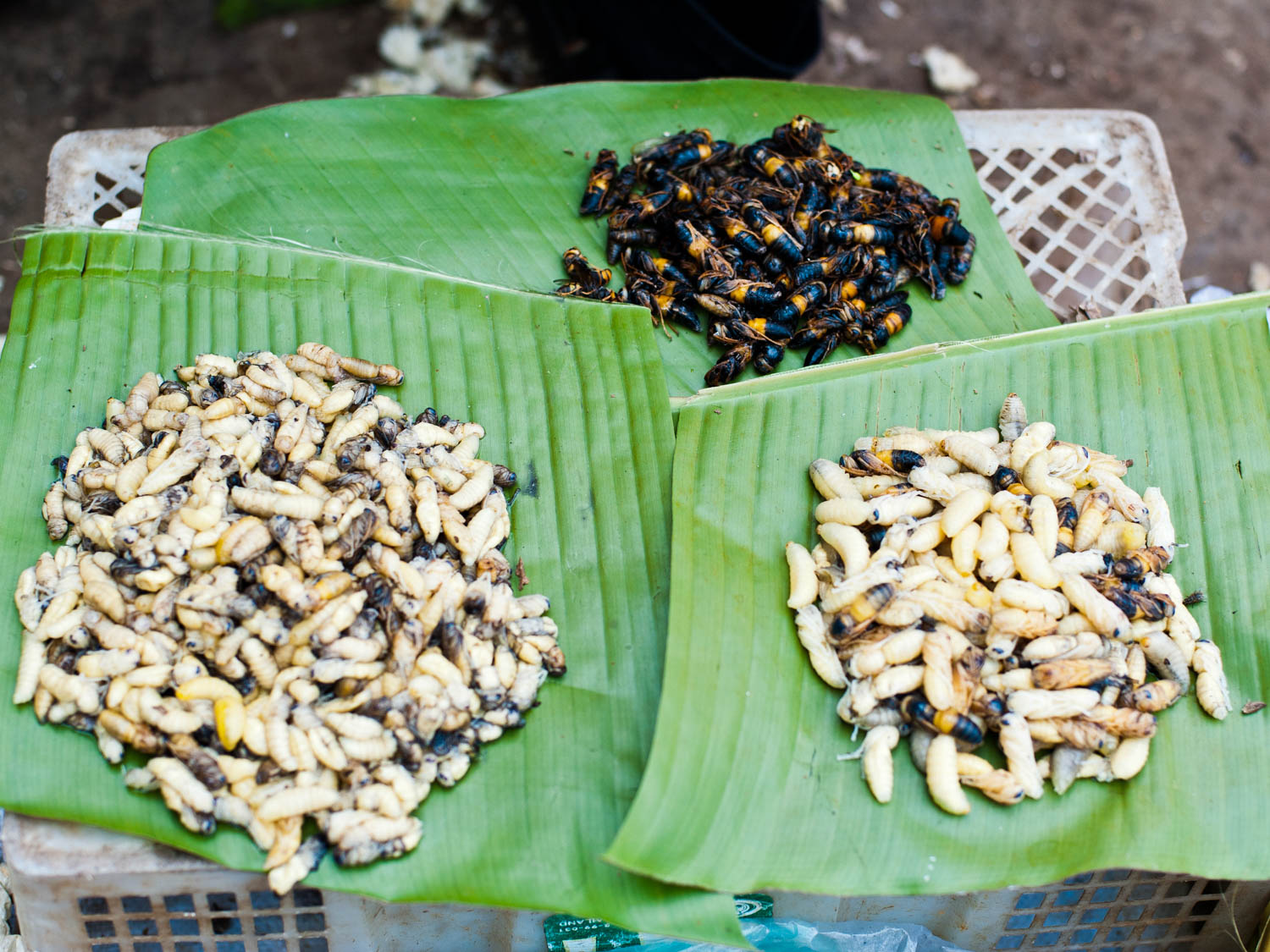 "You can't come all the way to Yunnan and not try the insects," he replies innocently, but I get the feeling he's mocking my eat-anything attitude. People have been eating insects in Yunnan for centuries—certainly long before Westerners began viewing bugs as sustainable sources of protein. The dragonfly nymphs are crunchy and well seasoned, but it's the bees that are a revelation: thin, crispy crusts yielding to a soft, creamy interior that tastes like smoky ricotta. I find the bamboo larvae more challenging—I can't get past the fact that they look just like housefly maggots—but Lily pulls off their little black heads and eats the pale, plump bodies, pronouncing them delicious. It's quite the turnaround for a child who's spent the last three years insisting that Chinese food is "yucky." 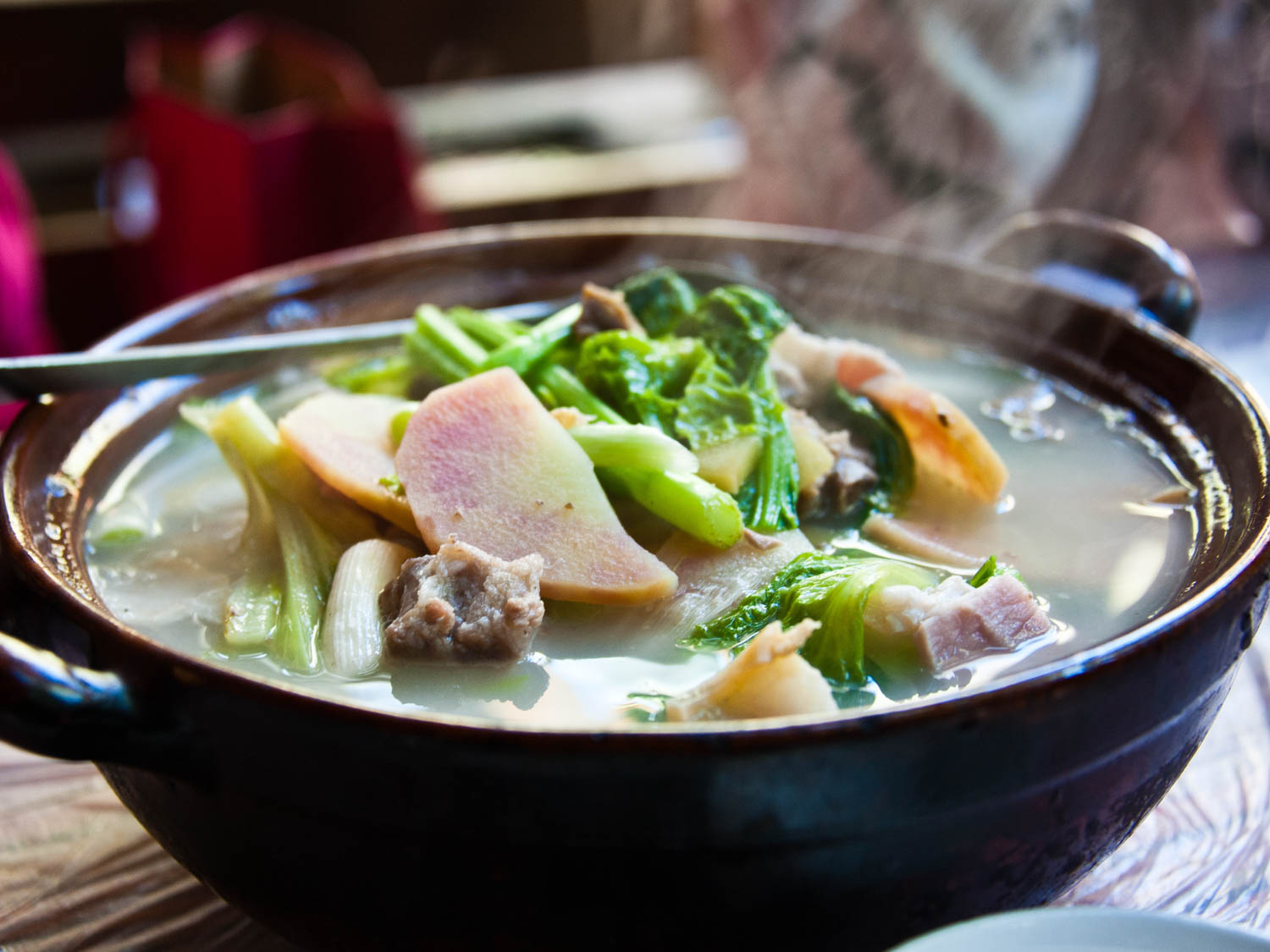 We follow our crunchy appetizers with a rich, warming stew of Yunnan ham (yuntui), the aged, dry-cured ham famous all over China for its intense depth of flavor and its smoky, dense fat. Here, the pink slivers are paired with sliced potato, turnip, scallions, and baby cabbage, but Yunnan ham is also used in stir-fries and as a flavoring for soup stocks, stews, and braises. I eat bowl after bowl of the stew, feeling comforted and satisfied, and the memory of its flavor lingers that night as we camp on a lonely road outside Lijiang, the nearby mountains shining white in the moonlight. 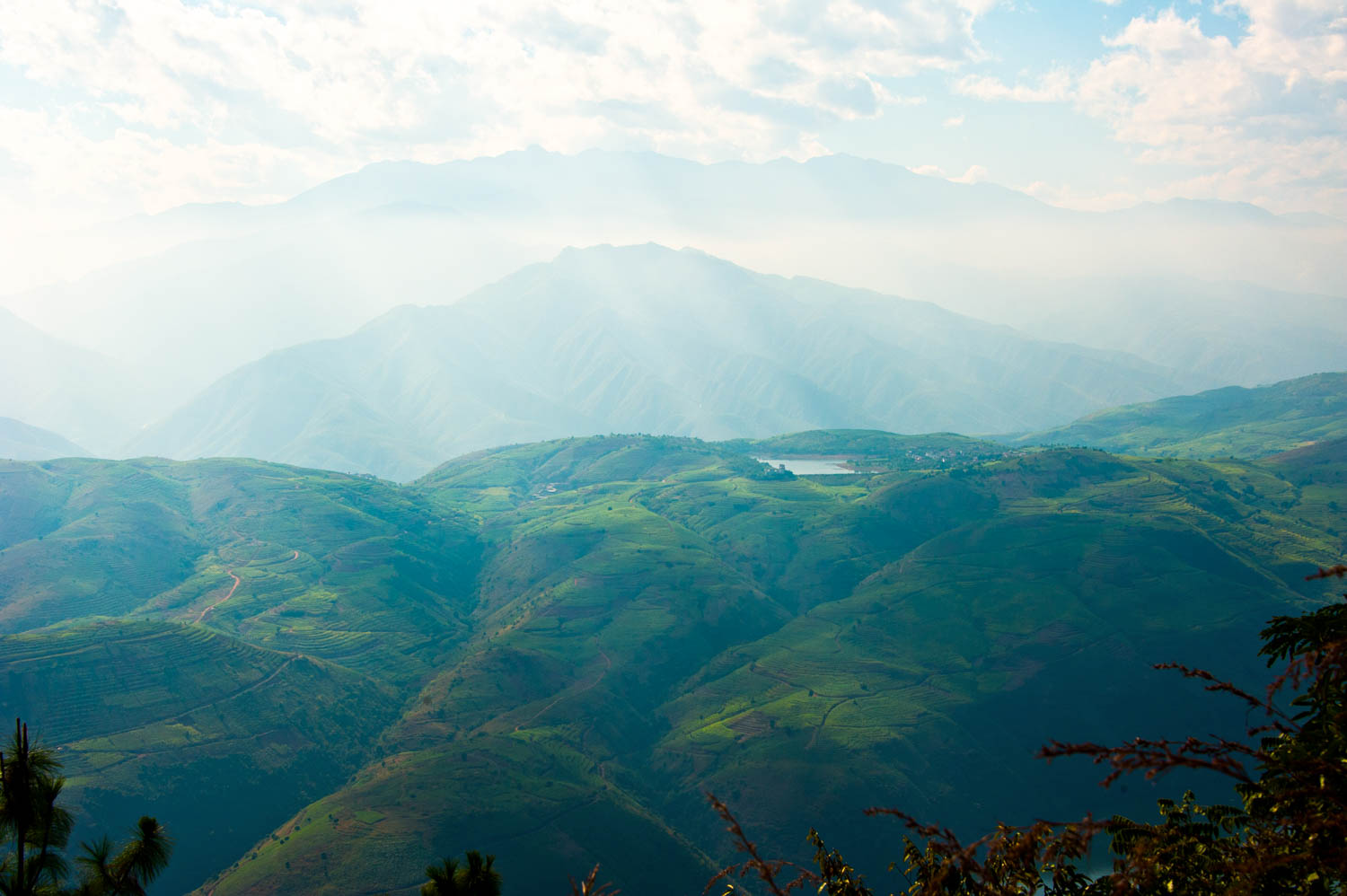 From Lijiang, we follow the ancient Tea Horse Road in reverse, north to south, driving along the paths by which Yunnan's famed pu-erh tea was transported from southern Yunnan to Tibet for more than a millennium. Just two weeks before, we'd been knee-deep in the Sichuan snow. But in western Yunnan, it's the languid end of a long summer: a wild, tropical environment with banana trees growing in messy clumps like weeds, surrounded by houses with high-pitched roofs sporting golden peacocks at each corner. Women in sarongs sit in the shade at roadside fruit stalls, their tables weighed down with tamarind, limes, bananas, custard apples, pomelos, and mangoes.

We continue southwest, parting ways with the Nujiang River, and take the road into Ruili, right on the Myanmar border. Broad green hills, terraced from top to bottom with emerald-ribbed tea bushes, usher us into town. It's said that Ruili is a frontier town, teeming with drug runners and smugglers, but to us, it seems like a sleepy tropical outpost. The jungle is slowly reclaiming lost territory, and green creepers grow through the windows of vacant houses, tethering them to the nearby trees. In the dense, humid heat, the gardens are flourishing and overgrown, filled with hibiscus, jasmine, and wild orchids.

That evening, we feast like kings. Ruili's night market is a vast, open-sided hangar, crowded with people and restaurant stalls. "How are we going to choose where to eat?" asks Bella, but the answer is easy. We sit at a plastic table in the dead center and order dishes from all the stalls surrounding us. Fat tiger prawns in ginger and chili; catfish and sour tamarillo soup. The tamarillos, tree fruit with a passing resemblance to tomatoes, deliver a bright tartness, balanced by the oily, full-flavored poached catfish. We try char-grilled eggplant served inside its blackened skin, with a topping of salted and fermented yellow soybeans with ground pork: soft, sweet, and umami. We finish with a freshly dispatched chicken chopped with a heavy cleaver into mouthful-sized pieces, bones and all, fried with shallots and dried smoky chili. The girls sip ningmeng shui, a local drink of freshly pressed lime juice stirred with a teaspoon of sugar and served over ice, while Matt and I drink from tall frosted bottles of pale local lager. 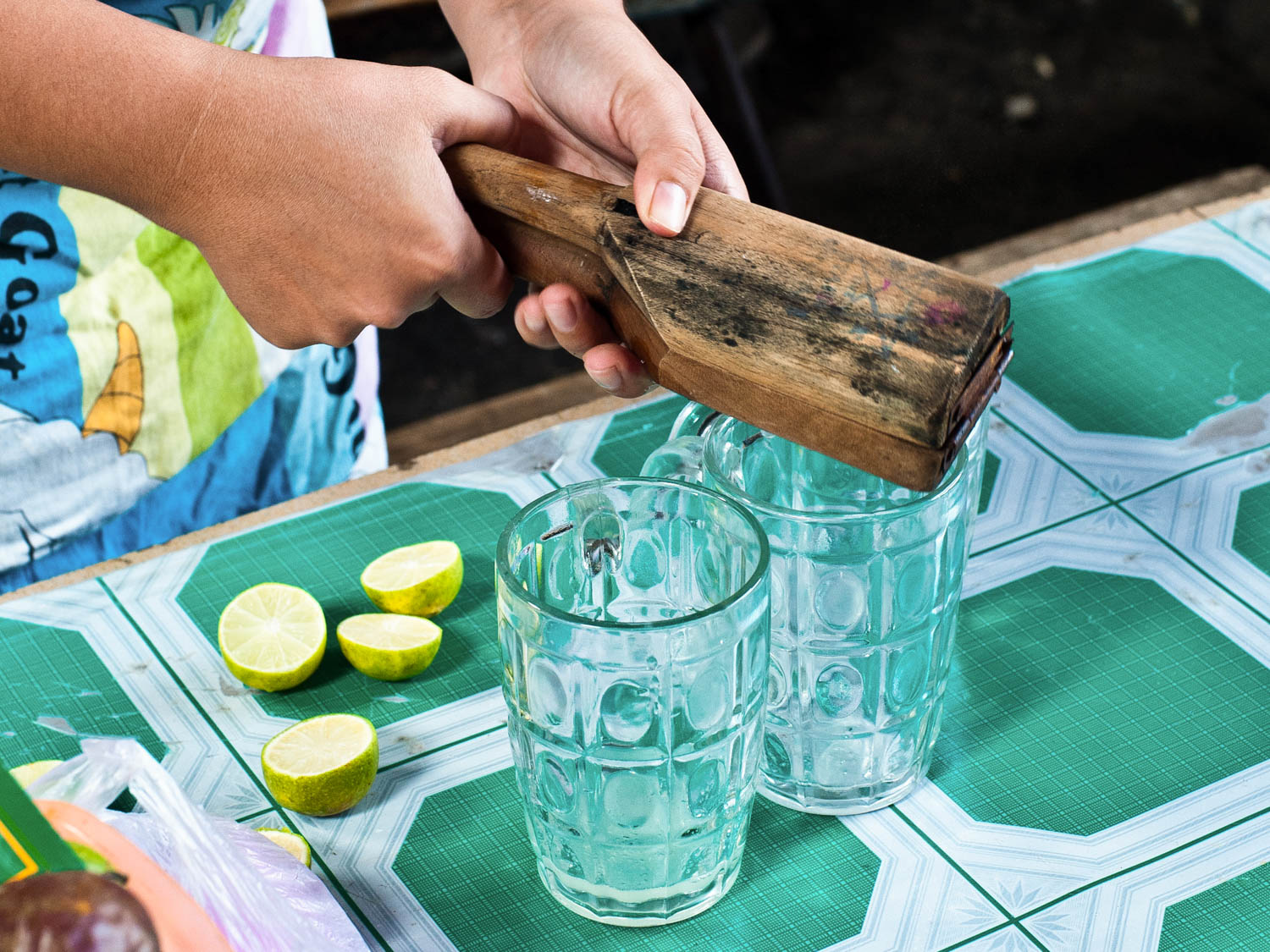 "Where to now?" I ask the next day, as we try to decide whether to stay in Yunnan's lush south or head north to the capital, Kunming.

"Xishuangbanna!" says Matt. It's a tongue-curlingly difficult name to say; he loves to repeat it with a long, dramatic "ah" at the end.

Before long, Bella and Lily have joined in, at least for the "bann-aaahhh" part. And, since nobody's anxious to return to colder climes, Xishuangbanna it is: We take our RV farther south, skirting the Myanmar border to the banks of the Mekong River. It's a jungle town, colorful and distinct, and trades on the culture of its local Dai community. The Dai share much with the peoples of Laos and northern Thailand, including their distinctive Dai/Thai script, a love of communal eating, and an affinity for spicy, sour flavors that find their way into dishes featuring local Mekong River fish or combinations of mint, ginger, chilies, and sour pickles. 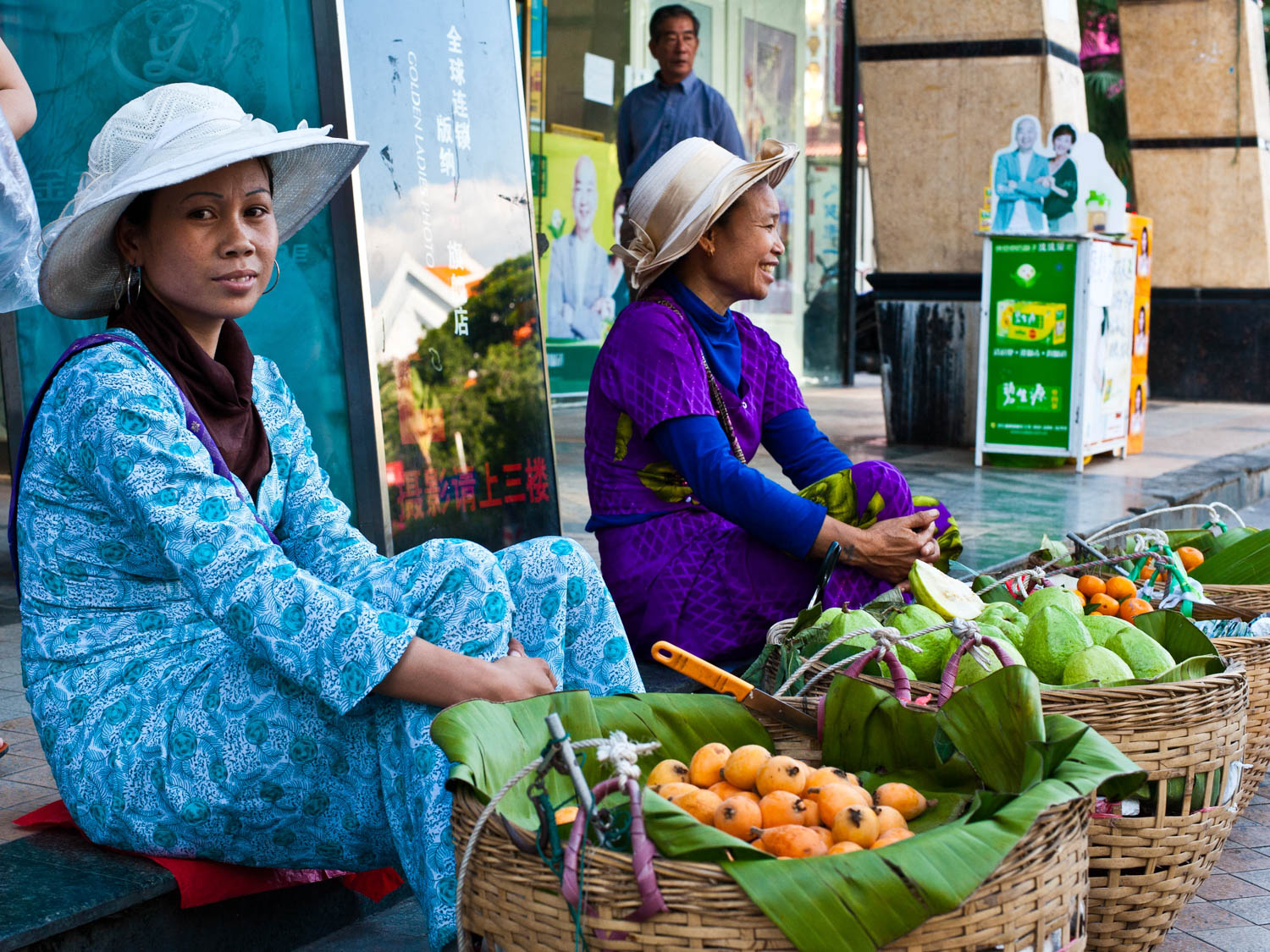 By day, we wander Xishuangbanna's markets, soaking up the bright colors and wonderful smells. Vendors sell pineapples, papayas, green mangoes, bananas, mangosteens. There are orange loquats, sweet and tart like apricots; wild roots, fresh herbs, and fruits I've never met. Egg yolk fruit, with its gold-green skin and flesh, is startling—with the texture and color of a hard-boiled egg yolk, but a sweet flavor somewhere between roasted pumpkin and ripe papaya. At breakfast the next day, I try it with a squeeze of fresh lime juice, the perfect way to bring out its sweetness.

At the back gate of the market, a woman in a patterned sarong entreats me to try her baba, a popular street snack: circles of purple sticky-rice dough grilled over charcoal, where they puff up into balls over the heat and soften. Flattened and filled with dark brown sugar, the balls are then folded into a delightfully chewy, sticky, sweet package and wrapped in a banana leaf. 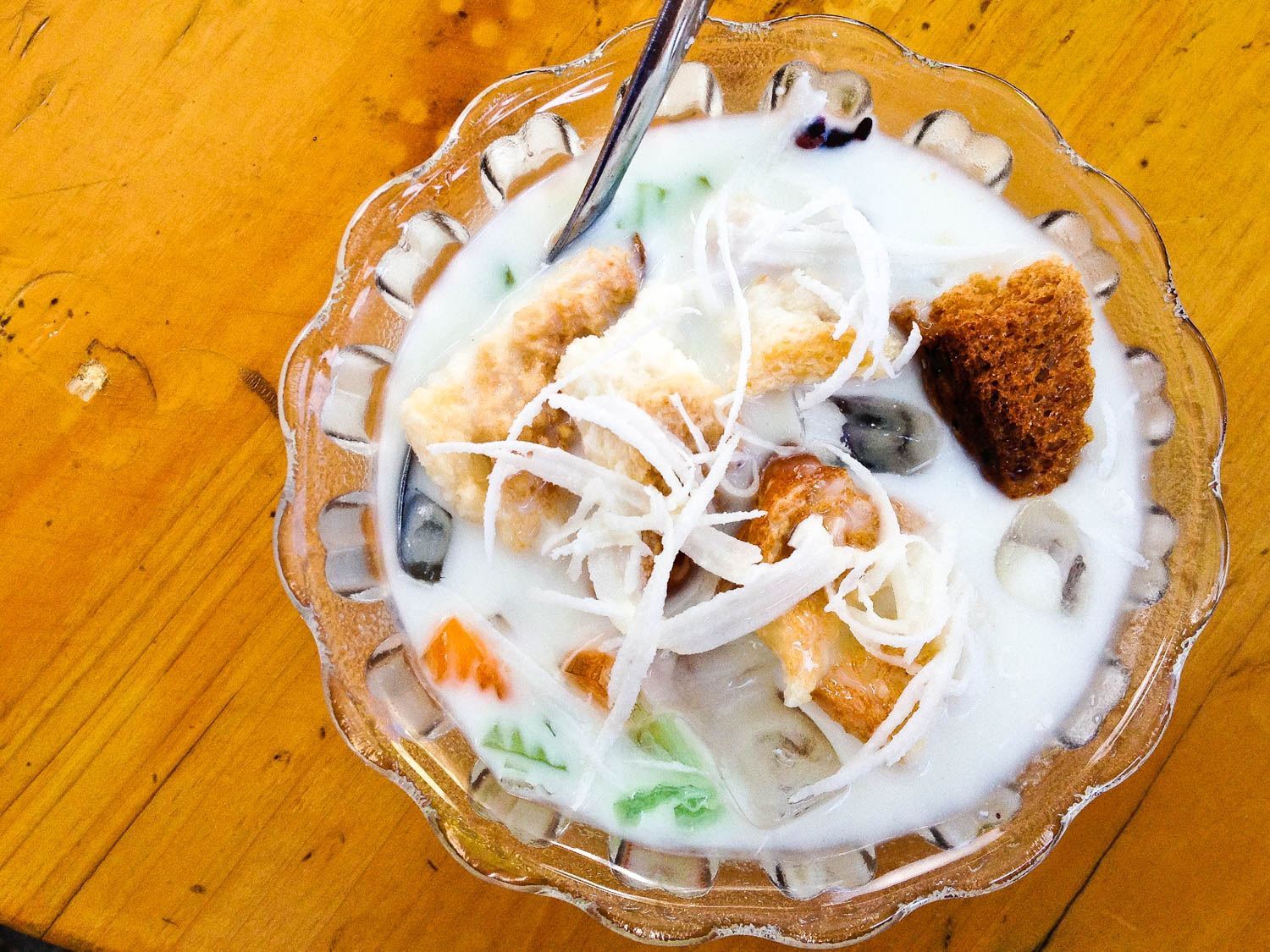 Seeing our willingness to try local foods, the traffic policewoman outside the market takes us under her wing, introducing us to paoluda in a hole-in-the-wall café nearby. It's a mix of tiny tapioca pearls, sweetened condensed milk, black sticky rice, rainbow-colored jelly cubes, chunks of dried bread or cookie, and shaved coconut. The individual components sound dissonant at first, but the dessert proves refreshing: cold, sweet, and coconut-creamy, with an intriguingly addictive blend of smooth, slippery, and crunchy textures. She tells me the dish is Burmese in origin, and the name is a Chinese version of the Indian and Persian drink falooda, which it closely resembles. 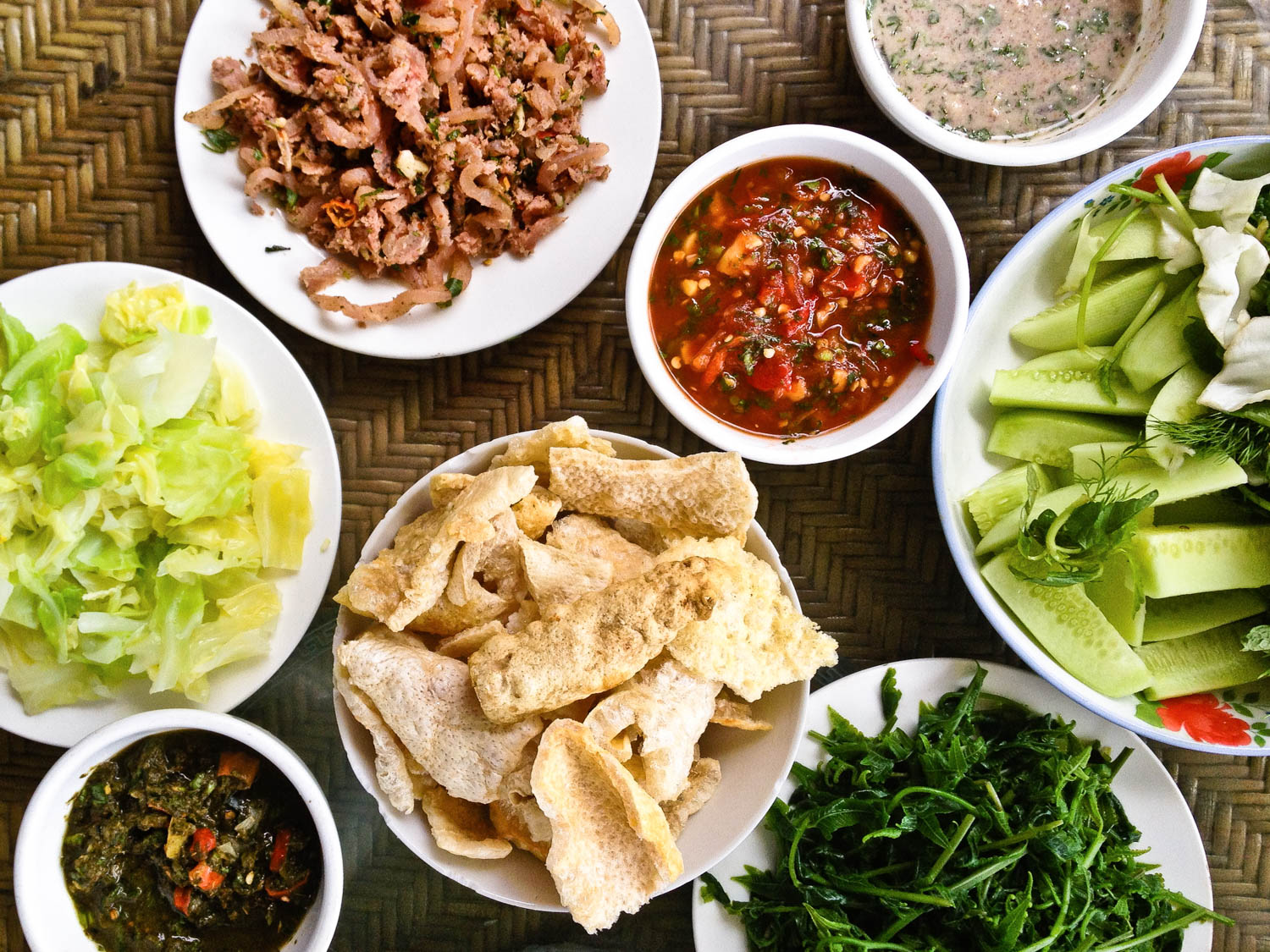 In the warm and humid nights, we dine on Dai banquets in restaurants, in the markets, in our guesthouse. A Dai feast arrives all at once, with everything sampled and shared together. Bowls of steamed wild greens and fiddlehead-fern fronds; pumpkin leaf shoots in a soup that balances an intense chili heat; and raw mint and cilantro served with four dipping sauces—a mildly sweet crushed-peanut sauce, a sour pickled-chili sauce, a fiery fermented-tomato sauce, and a rich, deep, dark sauce made with fermented tofu. At the center of the table is a platter of fish and meats, charred on the grill and smoky—sweet slices of honeyed ham, crispy-skinned chicken, freshwater fish wrapped in banana leaves, pork and mint sausage, and sliced pork belly. There is a tiny dish of a salty, peppery spice mixture in which to dip your meat. The most surprising bit comes from the shredded heart of a banana flower, wrapped in lemongrass and fried. It has a texture like soft bamboo shoots, and a vegetable flavor slightly reminiscent of green banana.

0 responses on "Feasting your way through Yunnan Province (1)"