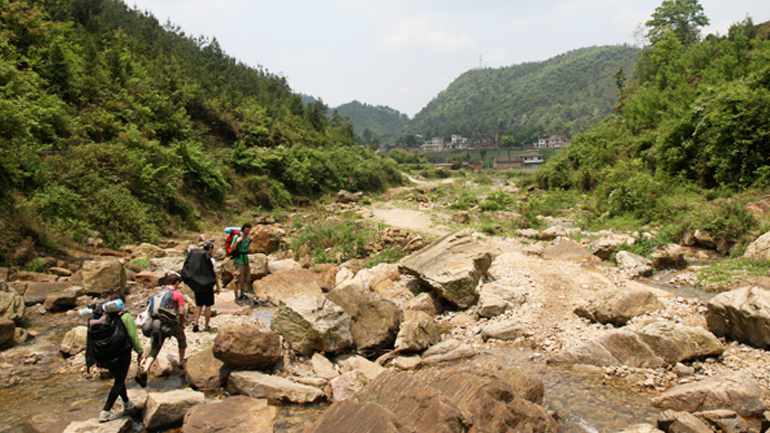 At a café in Changsha, Hunan province, Xu Jing shared her experience of being a budget traveller with a group of young people who are as enthusiastic about traveling as her.

Being tired of the traditional nine-to-five office routine, Xu quit her job with a listed company based in Changsha and travelled to Africa on a budget. She visited Kenya, Tanzania and Ethiopia at an average cost of less than 60 yuan a day.

"It wasn't an adventure, but exploration; I approached the world in my own way and as my own person," she said.

Budget traveling — whether it is hitchhiking, couch surfing or camping and eating simple –has become a trend for the younger generation of Chinese travellers.

Twenty-seven-year-old Tang Dasi from Zhanjiang in Guangdong province spent 30 days on a budget tour of Southwest China's Sichuan province, Tibet autonomous region and Nepal after quitting a State-owned company. He got some brand new experiences — parachuting and climbing the Himalayas.

"With increasingly greater pressure and a faster pace of life, young people have become flippant, impetuous and vulnerable, but new travel concepts give us an opportunity to rediscover ourselves," Tang said.

According to China's outbound travel site Qyer.com, more than 77 million Chinese backpackers travelled abroad in 2014, most of whom were aged 21-30, accounting for 62.4percent of the total.

A group of young travellers who returned from France, Russia, the Netherlands and Belgium said low-cost and independent traveling is becoming popular for two reasons. On one hand, travel agencies have hiked their prices, and on the other, the experience and knowledge they gained during budget backpacking helped construct new value and knowledge systems.

Wu Fangzhou, a university student, spent 50 days traveling 13 Chinese provinces at a cost of just 4,000 yuan. She slept in KFCs, railway stations and more often than not scored free nights on other people's couch.

"I don't care if I'm exhausted from long travel or suffering from cold and hunger; I must see what's on offer at the next stop."

However, Xu worried about safety and legal risks while on the road. "I didn't buy insurance and was most worried about falling ill. I would not have enough money to continue my trip if I got sick."

Zhong Yongde, dean of the College of Tourism at Central South University of Forestry and Technology, suggests budget travellers make detailed contingency plans prior to any trip. He also called on judicial authorities to improve tourism-related laws and regulations as well as offer better judicial protection for independent travellers.

0 responses on "Budget traveling becomes a trend for young Chinese"