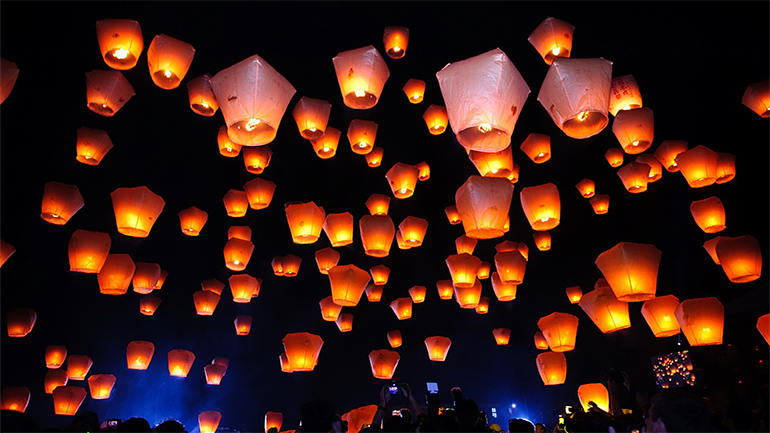 The final day of China’s New Year celebrations is the Lantern Festival – the middle of the opening month of the lunar calendar and thus the first full moon of the Chinese year.

The festival, which dates back more than 2,000 years, is marked around China and several parts of the world with celebrations and spectacular displays of light and craftsmanship. It is marked on Monday February 22 in 2016.

The Lantern Festival marks the coming of spring, with the hundreds of lanterns sent up into the sky representing longer daylight hours as well as the light from the full moon. In Ancient China, it served as the equivalent of Valentine’s Day in the West.

It has been celebrated since the days of the Han Dynasty around 2,000 years ago, which culminated with the spread of Buddhism across China. According to legend, Emperor Hangmindi, who ruled around the beginning of the first century, saw that Buddhist monks would light lanterns on the 15th day of the Chinese year to show respect to the Buddha, and ordered that the tradition be repeated in the Imperial Palace.

Now the lanterns often symbolise letting go of their owners’ past selves as well as symbolise good luck, and Lantern Festival is one of the most important events on the Chinese calendar.

It was traditionally seen as the “Chinese Valentine’s Day”, since the celebrations were one of the few days in Imperial China when unmarried ladies were allowed to freely leave the house.

The Lantern Festival is still commercialised as such in Hong Kong, but the festival has lost its romantic connotations in some parts of China, in which “Double Seven Festival” is seen as the Valentine’s Day equivalent.

As well as lanterns, the day is celebrated with lion and dragon dances and eating tangyuan – dumplings made of rice flour. The round dumplings are said to symbolise family togetherness.