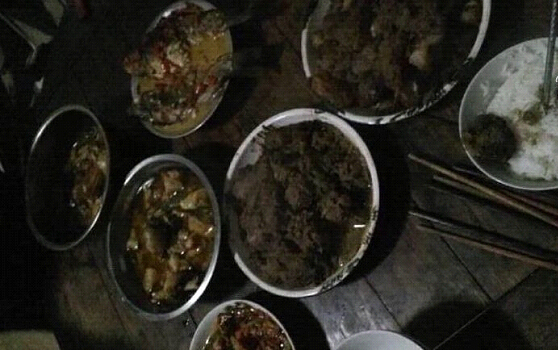 Marriage is much more complicated than love – different backgrounds, lifestyles, habits and values can lead to quarrels and misunderstanding when a couple weds.

Recent news of a middle-class Shanghainese woman who broke up with her peasant boyfriend over Spring Festival went viral on Chinese social media. The 26-year-old local girl was dating a migrant worker from a poor village in Jiangxi Province, but after being invited back to his ancestral home for a traditional Chinese lunar new year holiday, she immediately dumped him once she saw the humble dinner prepared by his relatives. She even publicly shared her experience on the Internet, along with a photo of the food she was served. What do foreigners take on the incident?

Howard Whiteson from the UK said it was wrong of the girl to suddenly leave. "It lacks sensibility. She knew her boyfriend was from a village. So she should have accepted the food, then broken up at a better time," he said.

"I think there would be a national outcry if it happened in my country, Ireland, especially how she posted it publicly to display his family's poor situation. It reflects a big gap and little empathy between the rich and the poor in China," said an Irish citizen in Shanghai.

"I totally don't agree with the reaction of the girl, because even if she didn't want to continue dating this guy, she didn't have to humiliate his parents," said Olga Portnova from Kazakhstan.

Some expats the Global Times spoke with are married to a Chinese spouse and have firsthand experiences when it comes to cultural differences. The Global Times also asked these same foreigners to expound on their impression of Chinese dating and marriage.

"Compared to the West, people in China mostly marry for money rather than feelings. Most of the time it's only because of their parents' influence. But this is like how France was 60 years ago, so eventually China will also change," said Oscar.

"Making assumptions and having strong opinions can hurt opportunities for change. The girl should look at what the boy can become instead of where he came from and what he was in the past. Just because everybody uses AC power now does not mean they will in the future," said Derek Cowburn from the US.

"From my understanding, many times the choice in China is based on financial and education criteria before true love. But I believe everybody should be humble and respectful toward each other. Class differences should not be a deal breaker if the couple really loves each other," said Saidah.

In the case of the Shanghai woman, it was obviously important for her to find a significant other who has a matching family background, but for the foreigners interviewed, this does not seem to be so important.

"I think it's fine for people of different classes to date and marry. There are many examples of this in the West. If love is strong then class shouldn't matter. But it can also eventually create conflict," said Whiteson.

"There is no reason people from different family backgrounds and classes should not date or marry. Most societies are not like the Indian caste system, in which there is no mixing allowed," said Saidah. "In French we even have a saying that goes 'opposites attract.' Meeting and mixing with different people is very rewarding and helps us become more open-minded," he said.

0 responses on "Runaway girlfriend comes under fire among expats"