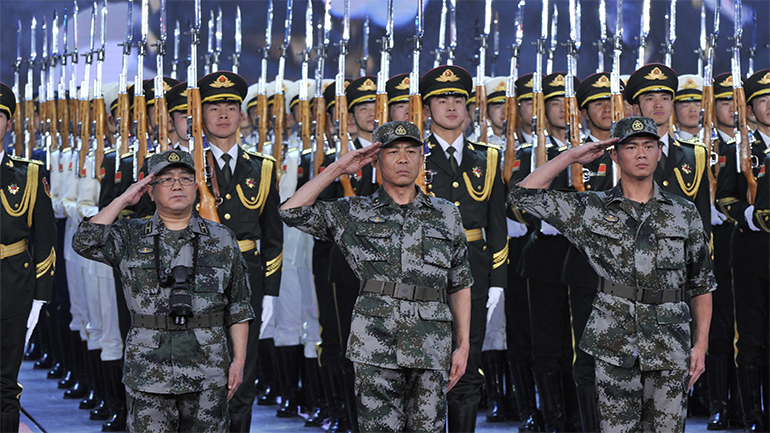 BEIJING — "Too handsome! Aren't they handsome," the actor Ju Zhaojie cooed as dozens of soldiers, from an honor guard of the People's Liberation Army, stamped off the stage, issuing earsplitting shouts.

They had just been featured in "The General and the Soldier," a 14-minute skit in the annual Lunar New Year's Eve TV gala broadcast across China on Sunday to mark the start of the Year of the Monkey. CCTV, the state broadcaster, said about a billion people in China and around the world watched it.

"Chunwan," or Spring Late, as it's colloquially known — referring both to "Spring Festival," an alternate name for the Lunar New Year, and to the four-and-a-half-hour program's 8 p.m. start time — is a cultural institution here. The show has been aired every year since 1983.

Amid the phantasmagoric colors and frantic activity of the 39 skits, this year's gala, titled "You and Me, Our China Dream — Fully Building a Moderately Prosperous Society," offered the usual diet of patriotism, ethnic unity, singing and dancing children, comedy and kung fu.

The show also touched on some socially contentious issues, like widespread financial fraud and the poor state of interpersonal trust in China (in a skit set at a hospital). But its political content had far more to do with promoting the goals set by China's leaders, like moving the country up the science and technology ladder (as represented by the synchronized dancing of 540 robots and 29 drones).

The gala's heavy ideological messaging and overt glorification of the military led some Chinese to remark that this year's offering was even more propagandistic than usual. At one point, amid images from the enormous military parade in Beijing last September that commemorated the end of World War II, the message "Listen to the Party's command" appeared on the screen.

"The Chunwan is really a kind of propaganda," Miao Yang, an engineer, said in an interview. "A lot of people felt that especially this year it was more political than usual, whether the military parts or the other skits."

But Mr. Miao said he watched anyway, like hundreds of millions who either love the Chunwan or love to hate it.

In the "General and the Soldier" skit, Mr. Ju's character, a military photographer, documented a humble general who insisted that a lower-ranking soldier teach him to march. The skit amounted to a careful display by propaganda officials of high-level humility, after the arrests of several generals on corruption and dereliction of discipline charges.

Other propaganda efforts were less subtle. Here are some lyrics from the gala's opening song, "Spring Is Here and Happiness Has Come," performed by a clutch of well-known singers and scores of brightly costumed dancers. To a jaunty soundtrack, they touted the latest crop of numerically oriented Communist Party-issued slogans:

"Let us say and sing it out, our mood is heroic!

The Four Comprehensives are the general arrangement

The Five Development Ideas are the future.

The might of the Sept. 3 military parade was mind-blowing,

The Three Must Succeeds earned a 'hurrah' from around the world.

Anticorruption and clean government are the people's heartfelt wish,

"Was this the Chunwan or the nightly news?" a person called Yao Di inquired sarcastically below a link to the event, one of thousands of critical remarks online.

Other commenters said they enjoyed the show. "A fresh feeling for the eyes and ears!" wrote Pengyou on the website of The Observer, a news site. "A lot better than last year's," wrote a commentator from the city of Tai'an in Shandong Province.

"It really wasn't bad," wrote another commentator, from the city of Guiyang in Guizhou Province. Sounding a bit defensive, the person added: "It's just that a lot of people in China love to criticize and to suspect everything that's from here, and think it's not as good as anything foreign. A lot of people are in a really bleak mood!"