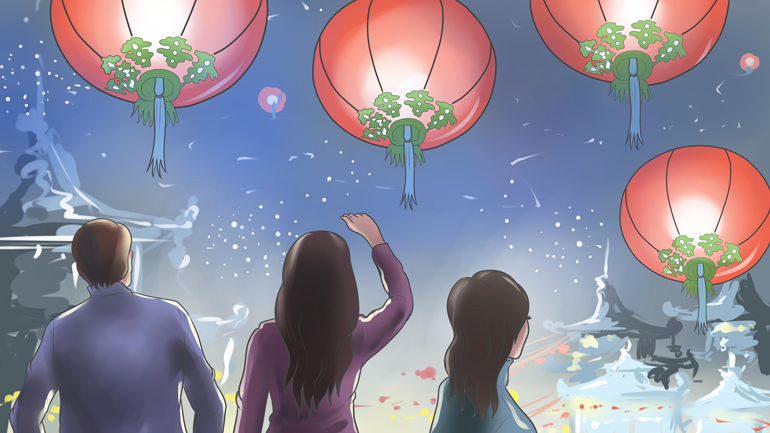 When the Spring Festival rolls around, there's a lot to be done. As this festival lasts for 15 days, there's something different for each day, and preparations for the celebration begin weeks before the actual festival. Leading up to the New Year, there are plenty of superstitions (迷信 – mí xìn) about what should and shouldn't be done. For example, you shouldn't get a haircut (剪头发 – jiǎn tóu fǎ) or buy shoes (买鞋 – mǎi xié) during the first month of the New Year, so these things should be taken care of before the holiday rolls around. It's said that if you get a haircut, your maternal uncle will die, and that if you buy new shoes, you will have bad things happen to you. This is because the word for shoes (鞋 – xié) sounds exactly like the word for evil (邪 – xié). Other superstitions include paying off all debts before the New Year (otherwise you'll remain in debt), avoiding references to death or the past, and wearing red (good luck) but not black or white (bad luck).

Similarly, you should clean the house (打扫房子 – dǎ sǎo fáng zi) inside and out leading up to the New Year. When you clean before the New Year, you sweep out all of the bad luck from the previous year; however, when you clean during the New Year celebration, you risk sweeping out the good luck. So just leave that pile of dust in the corner, kick back, and watch some TV. There's also an old story behind the necessity of cleaning the house for the New Year:

In Chinese mythology, there is a Kitchen God (灶君 – Zào Jūn – lit. "stove master") who protects the home and the family. As the story goes, on the 23rd day of the 12th lunar month, just before the Spring Festival, Zao Jun returns to heaven to report back to the Jade Emperor (玉皇 – yù huáng) about the activities of every household. After seeing Zao's report, the Emperor will either reward or punish a family, based on what he has heard. In order to have a positive report passed on to the Jade Emperor, families will do many things. A clean house will mean a happy Kitchen God, which will in turn bring good luck to the family.

Not only should the house be clean before the holiday, but it should also be decorated. Hang some couplets (春联 – chūn lián) outside of your front door, and make sure that they are red. Many of these will feature the character for good fortune (福 – fú) hung upside-down. This is a play on words, as the saying "fu is upside-down" (福倒了 – fú dào le) sounds the same as "good fortune has arrived" (福到了 – fú dào le).

On New Year's Eve (除夕 – chú xì), families will gather together to have a huge dinner (年夜饭 – nián yè fàn). Many families will eat fish (鱼 – yú) for this meal, as it is believed that this will help your wishes for the new year come true. There is even a Chinese idiom that goes, "Every year there are leftovers" (年年有余 – nián nián yǒu yú). This is a play on words, as 余 (extra, leftover) and 鱼 (fish) have the same pronuncation.  In the northern part of China, most people will eat dumplings (饺子 – jiǎo zi), which are symbols of wealth as the represent ancient Chinese currency. Some will even put a coin into one of the dumplings, and whoever ends up eating that one will enjoy great luck and prosperity in the new year. Down south, people will cook up a special New Year cake (年糕 – nián gāo), made of gluttinous rice flour. This is another play on words, as it can also mean "a more prosperous year."

Another famous tradition for Chinese New Year is the lighting off of firecrackers (放鞭炮 – fàng biān pào). As I mentioned in the History of the Spring Festival, it is believed that doing so helps keep the evil Nian beast away, as well as other evil spirits in general. Around Spring Festival, it is not uncommon to hear firecrackers going off all day long, and on New Year's Eve, it seems as if they never stop.

0 responses on "Talking about Spring Festival activities in Chinese"