12 symbols of the Chinese Spring Festival 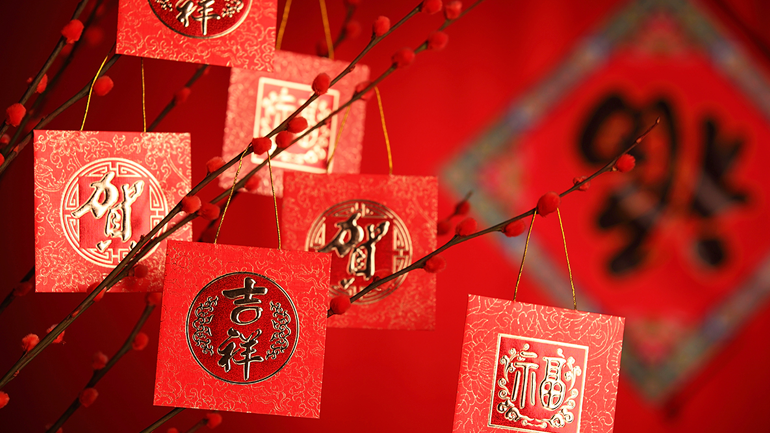 The Chinese New Year, or Spring Festival, is the most important holiday in Mainland China and is also celebrated by millions of ethnic Chinese around the world. Despite modern commercialism, the Spring Festival remains primarily a family holiday, and an important time of reunion. While many Westerners may never have the chance to observe first-hand how the Chinese celebrate the festival in their own homes, every year Chinese cities and towns are filled with a multitude of decorations, all of which contain strong symbolism with regard to the Chinese Spring Festival, and what the Chinese people value at the start of a new year.

We have put together a list of some of the key symbols and themes Westerners are likely to see around the time of the Chinese Spring Festival, along with short descriptions of their meanings and history. In learning about these symbols, Westerners will be able to understand how the Chinese celebrate this important festival. So the next time a Chinese friend or business partner asks "Do you know why we use XX during the Spring Festival?" you can give them a nice surprise!

The Color Red: in Chinese culture the color red is closely associated with good fortune and happiness. It is a common theme throughout the Chinese Spring Festival, and many items are created partly or entirely in red colors, including clothing, firecrackers, and many types of decorations. In China, the importance of the color red is also linked to a beast called a "Nián (年)" which is said to have terrorized a village in ancient China on the first day of every New Year. The villagers eventually realized that the Nián was scared of the color red, and began using the color to decorate their houses when preparing for the coming of the new year. In addition to its usage during the Spring Festival, the color red is also commonly used in weddings, and when a new business opens.

The Color Yellow: the color yellow was traditionally the symbol of the Chinese emperor, and even in modern society can be seen as denoting a higher status. While yellow is often viewed as a symbol of cowardice in Western societies, this bias does not exist in China as the color is a symbol of heroism. In China, the color yellow is also seen as symbolizing good luck. However, the color yellow should be used carefully by those not familiar with Chinese culture as in some circumstances it can refer to pornography or lewd behavior.

Fú Characters: a very common decoration during the Chinese Spring Festival is the "Fú (福)" character, which means good fortune in Chinese. A square of red paper adorned with the Fú character is pasted to the outer side of the door to one's home, and sometimes the character is also used to adorn interior doors. While in the past the decoration usually consisted of a red square of paper with black-colored calligraphy, many modern version are much more elaborate and use a golden color for the character, and are decorated with other characters from cartoons or the zodiac animal of the current year. In addition, a tradition practiced in some, but not all, regions in China is to paste the Fú character upside down. In Chinese the word for upside down,"dǎo (倒)," sounds similar to the word for arrive, "dào (到)." Thus, pasting the character upside down implies that good fortune has, or will arrive.

Couplets: couplets, or "duì lián (对联)" in Chinese, consist of two vertical strips usually comprising 7-11 characters, and sometimes a third horizontal strip comprising 4 characters. Duì lián are intended as permanent fixtures adorning the outer gates of a home and can embody one's hope with regard to a number of different themes including prosperity, peace, success, among others. "Chūn lián," by contrast are a non-permanent version displayed before, during, and after the Chinese Spring Festival. Red strips of paper are used, with characters written in black or gold ink.

Red Envelopes: during the Chinese Spring Festival it is a common practice for elders and married couples to gift small amounts of money to children and young adults. This money, referred to as "yā suì qián (压岁钱)," is presented in small red envelopes, also called a "hóng bāo (红包)." The money is given both to make children happy as well as to give them good luck in the new year. Interestingly, the practice's roots are related to fending off evil spirits and protecting the children, as opposed to merely blessing them with good luck. Historically, large amounts of money were not given to children in these red envelopes. However, following China's democratic reforms cash amounts have increased, especially with a smaller number of children in each family.

Fish: fish are a very common theme in Chinese Spring Festival decorations, mainly due to a common blessing during the New Year, "nián nián yǒu yú (年年有鱼)." This saying,  "may you have fish every year" is pronounce exactly the same as "may you have extra every year" in Chinese. Thus when one wishes for someone to have fish every year in Chinese, one is also wishing for them to never have a deficit with regard to food, money, or other matters. Fish are therefore a common decoration, not just during the Chinese Spring Festival, but for anyone hoping for a little "extra" in their lives.

Paper Cutting: paper cutting is another traditional Chinese craft commonly seen during the Spring Festival. The cutting of designs and patterns supposedly began thousands of years ago as a way to worship the gods, and the tradition is said to have begun prior even to the invention of paper. During the Chinese Spring Festival, some of the most common designs are the Fú character, fish, and the zodiac animal of the current year. Paper cuttings are also commonly found at weddings and other types of Chinese celebrations. The material used in this craft is almost always the color red.

Lanterns: while there are many types of Chinese lanterns, the ones prevalent during the Chinese Spring Festival are always red in color, and are almost always round or oval in shape. They can be made out of either paper or cloth, and are usually decorated with black or gold calligraphy, and sometimes with other prosperous symbols. Common messages of goodwill on Chinese lanterns during the new year refer to happiness, peace, good fortune, and prosperity, among others.

The Kitchen God: Zào Jūn (灶君), or the kitchen god, is a traditionally deity widely revered in ancient China. Traditionally pictures of the kitchen god are hung above the fire in the kitchen, and he is thought to be a protector of the family. At the end of the year, It is believed that the kitchen god will travel to heaven to report on the family's doings to the Jade Emperor. Various practices are meant to ensure he does not say anything bad, including smearing the lips of his portrait with honey to sweeten his words, and presenting him with an offering of glutinous rice so that his mouth will be too full to speak. At the end of the year his portrait is burned so that he may return to heaven, and a portrait is put up on the first day of the Spring Festival. It is worth nothing that while a new portrait is put up at the start of the new year, the actual activities relating to the kitchen god actually occur on a separate "mini festival" before the Chinese Spring Festival begins.

The God of Gates: the tradition of gate gods dates back to the Tang dynasty when the emperor fell sick after having a bad dream in which ghost were searching for him in the palace. As the people of China took ghosts very seriously at the time, the emperor asked two of his top generals to stand guard at his door while he slept. On following nights the emperor instead hung portraits of the generals outside his door to protect himself. The story spread throughout China and to this day the Chinese people paste pictures of these gate gods outside their home around the time of the Spring Festival in order to ward off evil spirits and bring on good luck. In addition, gate gods are in fact part of a larger category of "nián huà (年画)," which are paintings or pictures pasted on the doors to one's home during the new year. Other types of paintings include children and red carp.

The God of Money: "Cái Shén (财神)," the Chinese god of money/wealth, is a deity believed to be able to bring wealth to those that revere him. Pictures of Cái Shén are traditionally hung in the family home, and family members often visit his temple during the Spring Festival to burn incense. Cái Shén is one of the reasons for the common Chinese New Year's greeting "gōng xǐ fā cái (恭喜发财)," which means "may you become wealthy."

0 responses on "12 symbols of the Chinese Spring Festival"