Seen Chinese couplets on the doors? 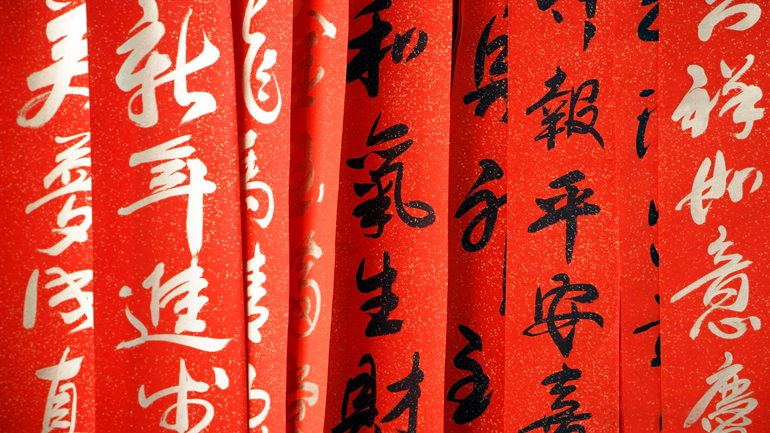 In regard to Chinese New Year decorations, one of the most important is the antithetical couplet posted in red on both sides of the main entrance to a building, yard, house, pavilion, temple, or apartment.

Chinese couplets (对联, duì lián) are usually a pair of successive lines of verse, especially a pair that rhyme, and the number of characters in each line is the same. The structure is very strict and well-defined.

The first line is the "head" and the second line is the "tail." In a couplet, a balance must be found between head and tail, between each character in one and the usually contrasting character in the same position in the other, and in tone, rhyme, and meaning.

A horizontal streamer (横批, hénɡ pī), which normally has four characters, is added above the entrance and between the two vertical streamers to indicate the theme of the couplets.

Chinese antithetical couplets are used for many special occasions, such as Chinese New Year, weddings, funerals, birthdays, house-warmings, and the like. Instructing with the couplet style was an important teaching method in Chinese history. They are also considered an important cultural heritage.

Ancient people in China believed that the door was a connection between the human world and other mysterious dimensions.

In order to protect themselves from otherworldly interference and to deter evil, Chinese folk carved "door gods" (门神, mén shén) on boards of peach tree wood and hung them on their entryways.

At the same time, the door was also the entry to welcoming a new era and good fortune. That's why the decoration on the door was so important.

According to an ancient Chinese folk tale, there is a ghost world and in that world there is a mountain. On top of that mountain, there is a sacred peach tree so big that it shades 3,000 li (about 932 miles) and on top of this tree, there is a golden rooster.

Every morning this golden bird crows and all the ghosts that had gone out wandering at night must return to the ghost world. The gate for the ghost world was northeast of this tree and on the two sides of the door stood two deities, "Tu" and "Yu Lei."

If any ghosts did wicked things during their night wanderings, Tu and Yu Lei would immediately know and catch the ghost. They would tie the ghost up with a rope made of reed, and send it off to be fed to a tiger. Thus, all the ghosts feared Tu and Yu Lei.

So, Chinese folks used to carve likenesses of these guardians into peach wood and place them on their doorsteps to frighten ghosts and repel evil.

This kind of craft using peach tree wood was later called Tao Fu. In Chinese, "táo" (桃) means peach, and "fú" (符) means magic charm. According to instructions in "History of the Eastern Han," Tao Fu must be six inches long and three inches wide, with the names of the gods Tu and Yu Lei written on them.

The Origin of the Couplets

In A.D. 964 (the 27th year of the reign of Guangzheng of the Late Shu), on New Year's Eve, then-emperor Meng Chang ordered his ministers to inscribe couplets on boards of peach wood in order to test their talent.

However, when the ministers presented their couplets to Meng Chang, none satisfied him. So, he picked up a pen and a peach wood board himself, and wrote:

"Taking blessings in the New Year; making the holiday an eternal Spring" (新年纳余庆，嘉节号长春). This is the very first pair of Chinese couplets on written record.

During the Song Dynasty (A.D. 960–1279), the practice of writing couplets on peach wood boards spread to commoners.

First, they retained the original intention of warding off evil spirits. Secondly, they expressed one's wishes, and finally, they served as a beautiful decoration for the door.

The couplets used for Chinese New Year are called Chūn Lián (春联), literally spring associations. They are an important part of the New Year celebration. The couplet is often in traditional style and reflects hope for the year to come.

The founding emperor of the Ming Dynasty (A.D. 1368–1644), Zhu Yuangzhang, issued an order before the New Year's Eve requiring every householder to write couplets on red paper and post them on entry door frames to welcome the New Year.

In the morning of the New Year, the emperor dressed himself in plain clothes and went door-to-door reading the couplets. Whenever he saw well-written scrolls, he was very happy and praised the writers' talent.

With the emperor's advocacy, the tradition of writing New Year couplets became a custom that has been continued to the present day.

The correspondence of each character of the head and tail sentences is shown in the following New Year couplets:

Through the dynasties, Chinese intellectuals engaged in creating new couplets as a form of entertainment. One person would make up the head sentence and another would create an appropriate tail sentence. It was a great challenge for the participants' linguistic and creative abilities.

In the old days, people would purchase custom New Year couplets from scholars who were kind and had the best calligraphic style. Today, people can buy printed couplets anywhere in the local markets.

During the Chinese New Year celebrations, you will find them everywhere!

0 responses on "Seen Chinese couplets on the doors?"