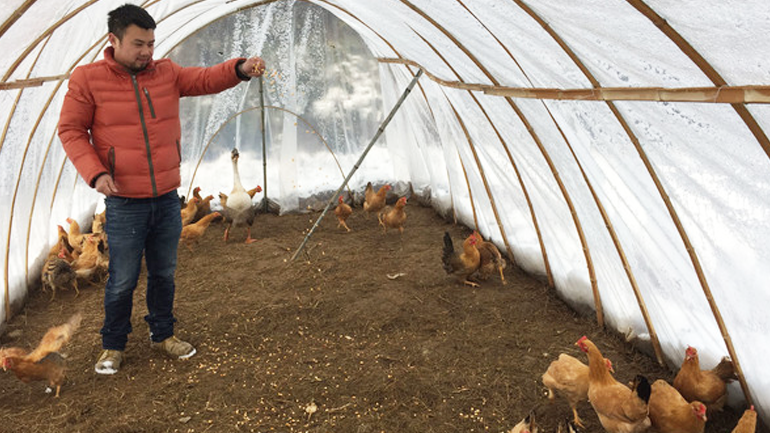 The pigs in Lonely Mountain village drink only spring water. There are no doors on their pens so they can come and go as they please. They eat only seasonal organic vegetables. In the village, one was sunning herself in a patch of mud while her porcine mates foraged for wild foliage or inhaled mountain soil as part of their health regimen. A little way down the hill, Lonely Mountain chickens were pecking at corn and wilted Chinese radishes as they contemplated a foray outside to nab some worms.

These fowl — fortunate enough to be raised in a remote part of the eastern province of Anhui — don't take drugs to stay healthy. They aren't fattened up at high speed and they breathe healthy Lonely Mountain air all day. Even the vegetables are lucky: they're fertilised with waste from pigs and chickens rather than chemicals. Like the livestock, they are watered with spring water alone.

Beijing is counting on these upper middle class pigs, affluent chickens and upmarket veg to make the nation rich now that widget-making will no longer suffice. To combat the Chinese growth slowdown that has rattled world markets since the start of the year, the Communist party expects the masses not simply to spend but upgrade their tastes to a point where they are buying more high-margin items such as Lonely Mountain meat.

It's often said that China has a two-track economy, where the old bit is faltering and the new bit is powering forth, but there's a split even within the bit of the economy that relies on consumption, according to Boston Consulting Group. Its report forecasts that, by 2020, 81 per cent of Chinese consumption growth will come from households with annual disposable income higher than $24,000, which BCG calls "upper middle class" or "affluent". The consultancy expects the number of such households to double to 100m within four years. They are forecast to comprise 30 per cent of all urban households, compared with 17 per cent at the end of last year and 7 per cent in 2010.

These are exactly the kind of people who like to know their pigs are breathing cleaner air, and drinking cleaner water, than they are themselves. Beijing has inadvertently contributed to this market by facilitating the grievous pollution of mainland soil and water in the pursuit of the Chinese industrial revolution, making food safety one of the most important issues for consumers.

And, now that ever more shoppers have the money to avoid the negative effect of all that pollution on their food, they are increasingly willing to drop a dime on doing so. On Taobao, the online Chinese marketplace, Lonely Mountain free range "black pork" fetches roughly a third more than normal "white" pork costs in the local food market.

In the run-up to this weekend's start to lunar new year — which begins with the most important meal of the year, nianyefan or new year's eve dinner — sales of Lonely Mountain black pork rose dozens of times over, says farmer Ah Tu, an IT expert who splits his time between Shanghai and his native village. He now does a roaring trade on Taobao in pigs, chickens, mountain goats, ducks and other animals raised in Lonely Mountain.

Ah Tu is not his real name: it's a moniker he's chosen to combine the Chinese character for earth with a prefix that suggests he's a down-home kind of guy. He's not as rustic as all that: during the two days we spent with him, he was constantly transacting pork deals on his two smartphones, sometimes via his Bluetooth headset. One entrepreneur called to arrange 200 lots of black pork to give to employees as a lunar new year gift. Ah Tu says his biggest problem is slaughtering pigs fast enough to keep up with demand.

He's hoping to lure more of his customers up to Lonely Mountain village to get up close and personal with the pigs they're buying. In future, customers shopping at his Taobao store will know the birthday of their chosen creature.