China to give employees 2.5-day weekend this summer 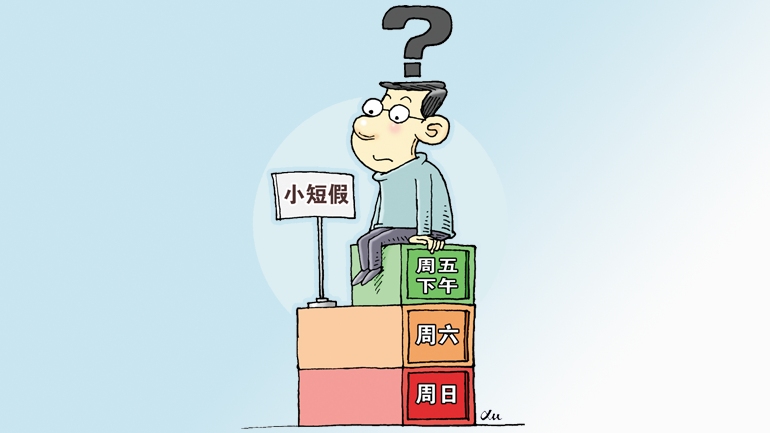 The State Administration of Tourism is mulling over a new plan to create a two-and-a-half day weekend across the country sometime by the summer.

The idea is to give employees more family time and also stimulate tourism. A number of provinces and municipalities across China, including Hebei, Jiangxi and Chongqing, have issued new policies, calling on companies to create 2.5 day weekends.

Under the plan, government institutions, state-owned companies, joint-ventures and privately-held companies are to be given incentives to allow their workers to take off at noon on Friday before coming back to the office on Monday.

Since being announced in November, the idea has begun gaining traction."It's a good thing for us, because we can obviously take more time to relax."I think it's a good idea. There are so many people commuting on Fridays. The traffic is usually very crowded."

In adopting the policy, the State Council, China's cabinet, says it hopes to create "favorable conditions," to give employees more family time, as well as stimulate tourism.

However, he notes the new policy is limited in scope.

"Three key points contained in this plan suggest its only a benefit for a certain group of people. Firstly, it's not a rule, but rather a suggestion. Secondly, the plan is conditional.Lastly, it's only applied to the summer months, rather than all-year round. Because of these stipulations, the coverage of the 2.5-day weekend is going to be very limited."

Qin Dingbo, vice-Director of Chongqing's Tourism Bureau, notes not every company is going to be required, or allowed, to adopt the 2.5-day weekend structure.

"In implementing a 2.5 day weekend, companies will still have to comply with China's laws and regulations. This means the program can't effect companies legal obligations, production or overall business. For State organizations and institutions, the extended leave program can be flexible and adjusted to fit the needs of the company so that it doesn't effect efficiency, but can also serve the people."

Under the provisions, a 40-hour work-week is still required, meaning employees who get a2.5-day weekend are going to have to make up the hours somewhere else during their week.

A nation-wide, two-day weekend policy was first set into law in China in 1995.

0 responses on "China to give employees 2.5-day weekend this summer"