China’s C919 potential to take on Boeing and Airbus 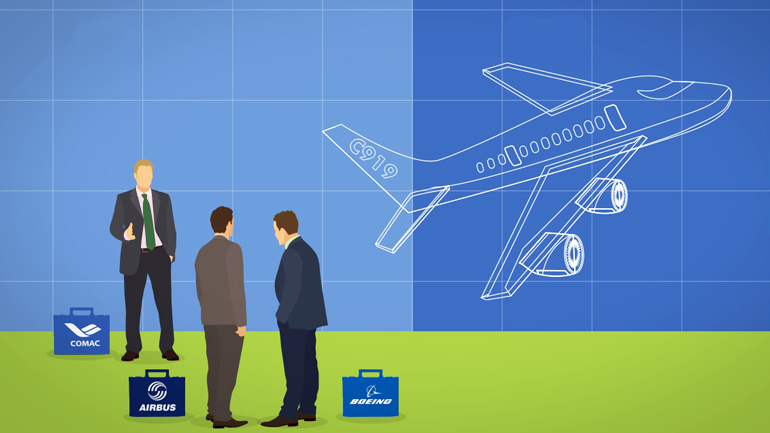 Commercial Aircraft Corporation of China (also known as COMAC) recently unveiled their first large-sized airplane with huge fanfare in Shanghai. The aircraft, called C919, can accommodate up to 168 passengers. The plane is intended to compete with other single-aisle aircraft like the Airbus A320 and Boeing's 737 family. So far, COMAC's new innovation has secured 517 orders from 21 customers that comprise mostly Chinese carriers. The aircraft has already received international recognition at this year's Dubai Airshow, where chief executives of Middle Eastern air carriers hailed the plane as being the much needed competition in a market dominated by Boeing and Airbus.

The timing for the introduction of the C919 couldn't have been any better. Airbus estimates that over the next two decades, the narrow-body, single aisle type aircraft are going to account for almost 70% of all new deliveries.  Boeing estimates that the global demand for such aircraft is going to total about 26,730 aircrafts within the same time period. These statistics are supported by the fact that there has been a significant boom in regional air travel, aided by the heavy influx of low cost carriers. According to Ascend Flightglobal, the global market for regional jets is predicted to reach 4,360 by 2034. Domestically also, the low-cost carrier market in China has seen significant growths in recent years. Boeing estimates that the Chinese market will require about 7,200 single-aisle planes to meet the growing demand in the coming years.

So does the C919 have what it takes to pose a real threat to the current duopoly? Maybe. First off, the plane is estimated to be a lot cheaper than its competitors. The price for the aircraft has not yet been revealed, however, a report published by China National Radio in June estimates the plane will cost about $50 million. This price is significantly lesser than prices of Boeing's 737 series of planes and the Airbus A320. In terms of technology, the COMAC C919 is fitted with western equipment that is comparable to the type of technology found in its competitors. This turned out to be quite a selling point at the Dubai Airshow, where chief executives of major middle eastern airlines said they would definitely consider buying the C919 considering the plane maintains industry standards. However, some analysts remain skeptical as to whether COMAC will be able to compete efficiently with already established names like Boeing, Airbus and Embraer citing reasons like "lack of industrial experience or COMAC's unrealistic production capabilities."

COMAC is already considering creating a wide-body aircraft, the C929, in partnership with Russia's United Aircraft Corporation. There is speculation that the Chinese airline manufacturer is attempting to create a new aero-engine entity to develop jet engines needed to power larger jets. This aircraft is likely to compete with Boeing's 747 series of jets and the Airbus A380.

The new entrant may not be experienced enough to take on Boeing and Airbus head-on, but is a much needed substitute to threaten the duopoly's pull in the industry. With time, it seems plausible that COMAC will become a trusted name in the market.