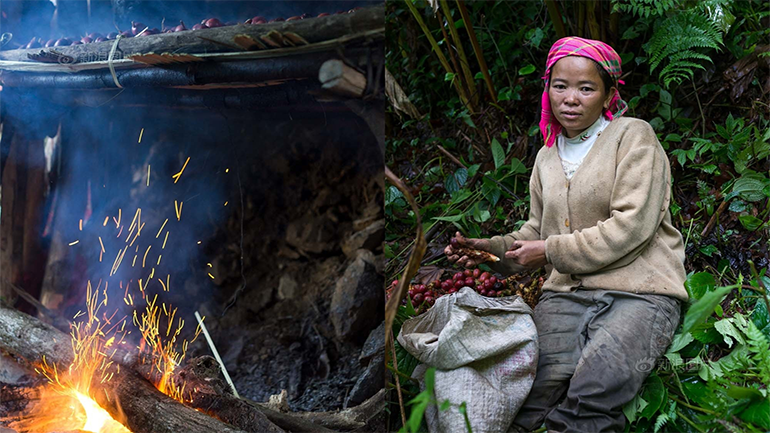 Mang, an ethnic group living in the forests on the China-Vietnam border, has been caught in the tensions between modernization and their ancestral lifestyle for several decades.

The tribe first came into state vision in the 1950s, not long after the establishment of the People's Republic of China. However, they were mistakenly taken as the Kucong people of the Lahu ethnic group in the first national census.

In fact, the Mangs are believed to be the descendants of the ancient ethnic groups of Baipu, whose language belongs to Khmer in the South Asian language family. They called themselves "Mang", meaning smart souls or mountain people.

The Mangs spread in the primitive forests in the mountains of southern Yunnan province and north Vietnam. For centuries they had been trying to avoid contacts with the outside world, living on their own with hunting, collecting fruits and farming by slash and burn.

Due to the harsh living conditions of the mountainous region, the Mang population barely increased over the years. In the 1950 national census, there were a total of 291 people in 59 Mang households; while in 2003, the population grew to 651, with 107 families. In Vietnam, the Mang population was estimated to be around 4,000.

The government built four villages for the 14 tribes in the primitive forests of Jinping County, Yunnan province in 1958. Mangs, influenced by neighboring nations, also started to plough and build simple shelters for settlement.

Half a century later in 2008, the "Development Project of the Mang and the Kemu People" was put into force supported by state funds. Villa-like houses with satellite cable TVs were built in three settlements of Longfeng village, Niuchangping and Pinghezhongzhai village, which were connected with pebble roads. It was also in 2008 that the Mangs were classified into a branch of the Blang ethnic group.

With governmental intervention, life of the Mangs changed drastically in a short period of time. Conflicts of traditions and modernity also emerged. For one minute they might be watching TV discussing the Syrian War; for the next minute they have already set out hunting in the mountain with their wine bags. They kept on going back to the mountains following their ancestors' footprints despite the temptation of better pays in the city. Is this only a backlash against modernization that will finally die off or will it evolve into a new approach of keeping one's identity in the irreversible trend of globalization? The answer lies, perhaps, only in time.

0 responses on "Mang: an unidentified ethnic group in China"