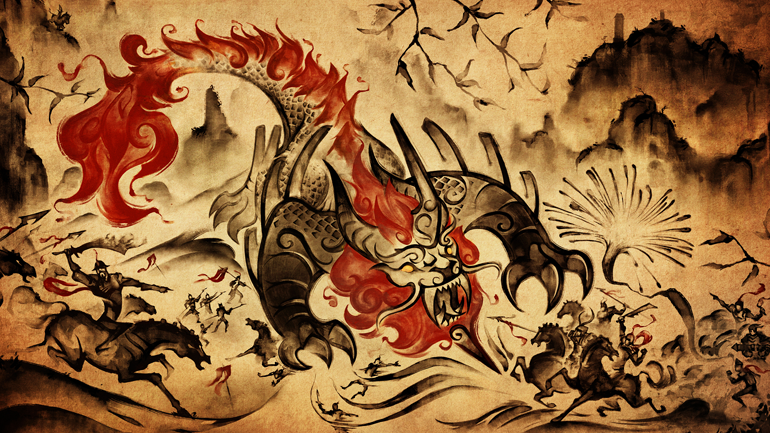 Once upon a time, long long ago, there was a man-eating monster called "Nian (年兽, nián shòu)". This beast lived deep in the ocean. It would sleep every day of the year, except on the last day of the Lunar Year, when the cold winter months would turn into Spring.

Nian would come on land to attack, and eat whatever it could find and whatever lay in its path. This was the night everyone lived in terror!

Year after year Nian returned, as this was a beast that was far too powerful for anyone to take on or defeat. Many had tried and all had perished. On New Year's eve, all the villagers would take their loved ones, old and young, deep into the mountains to take shelter from the beast.

One year on that night, a traveler came to town, looking for food and shelter. Everyone, with the exception of an old lady, was far too busy packing to pay him any kindness or offer him a simple plate of dumplings or a place to sleep. After his meal, the passerby was touched by the old lady's generosity and decided to bestow a long hidden secret of how to be rid of the New Year beast.

That evening when Nian arrived at their village, all the houses were dark, except the one in which the old woman lived. As Nian saw the light, it licked its lips with anticipation and approached the house.

Suddenly, it was greeted with deafening noises of firecrackers sounding endlessly. The monster was frightened and startled! Next, the beast saw that the house was covered in red paper. That scared Nian even more, and it took off running back into the ocean.

When the villagers returned, they saw that the old woman was unharmed! Everyone was eager to learn what she did to survive Nian. The old woman told the villagers that Nian was afraid of loud noises and the color red.

The next year, the villagers stayed up all night, lit firecrackers, lit red lanterns all around their houses, pasted red paper on their walls and doors, wore red clothing, danced to loud music, and banged loud gongs and drums.

That year and every year since, Nian has never returned. This eventually became a tradition and the way to celebrate Chinese New Year.

Sit down and watch this cartoon video talking about the story of "年兽":