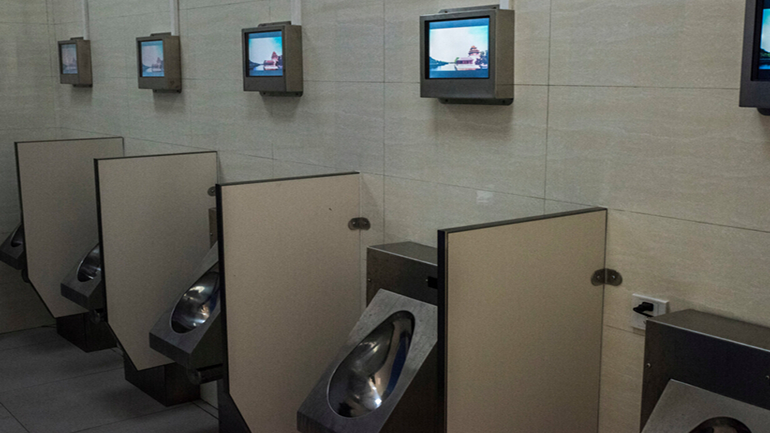 The Fangshan district of Beijing offers a state-of-the-art public toilet equipped with Wi-Fi, an A.T.M.,

BEIJING — Li Wen had heard about the turbo-strength flush power and the lily-scented soap. He knew about the stalls equipped with personal television screens and wireless Internet access, the soothing cello soundtrack and the windows lined with aloe vera plants.

But Mr. Li, 39, a salesman, was skeptical when he set foot in the new public toilet at the corner of Fuqian Square in Fangshan, a district in southwest Beijing. "What was wrong with the old one?" he said. "The government has too much money and doesn't know how to spend it."

Modern technology has changed nearly every facet of life in China in recent years, turning backwoods precincts into bustling cities and bringing cell phones to more than a billion people. But public restrooms in many areas have remained largely unchanged, equipped with the same squat toilets and concrete pits that Chinese people have used for generations. 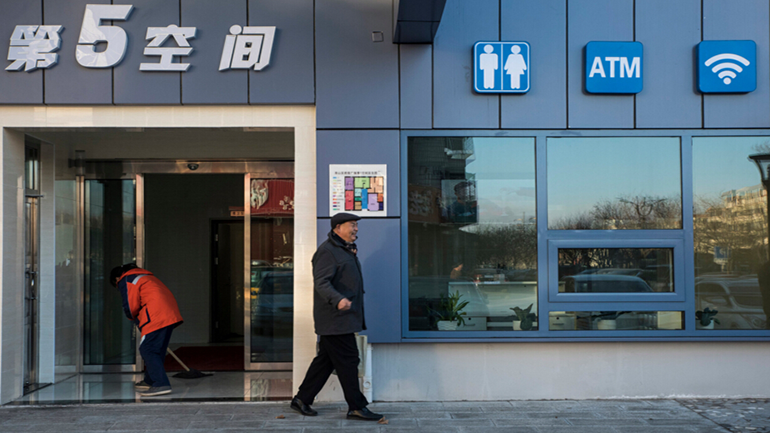 Signs on the outside of the public toilet advertise some of its services.

As the government seeks to improve sanitation and reduce environmental waste across the country, it is planning a major overhaul of public toilets. Over the next three years, it will build or renovate 57,000 restrooms, including some that will resemble the high-tech facility in Fangshan, the first of its kind in China.

The idea has won praise from many residents who have long deplored the squalid, crumbling condition of many restrooms. But it has also brought criticism from those who say high-end toilets are a waste of resources.

"It's just a toilet," said Lei Junying, 74, a retired farmer who lives in Fangshan. "Why do they have to make it such a nice one?"

The restroom in Fangshan, which includes a separate room with vending machines and an A.T.M., as well as charging stations for electric cars, has quickly become a popular stop. Every hour, dozens of people visit, sometimes staying to watch a video montage promoting environmental protection.

"Even the flush sounds different," said Zhou Wang, 25, a driver from Beijing. "Maybe it will help bring more foreign visitors. They think we're backwards because of our toilets."

The restroom in Fangshan is designed to conserve water by recycling wastewater from sinks to flush toilets. In addition to squat toilets, it offers several sitting toilets and dividers between the stalls, features that are not standard in Chinese public toilets.

But it has maintained some Chinese characteristics, including a communal roll of toilet paper at the entrance and a separate bin for used toilet paper.

China has improved its toilets significantly in recent years, upgrading facilities for 593 million people between 1990 and 2010, according to the World Health Organization. But in poorer areas, it says, the challenges are acute, and 14 milion people still defecate in the open.

Chinese officials have said they plan to build more toilets like the one in Fangshan in other suburban and rural areas. The aim is to build "beautiful cities and livable homelands," according to a report by China.com.cn, a state-run news site.

Lu Suisheng, 69, a former teacher from Inner Mongolia, visited the toilet several times during a recent trip to Fangshan to see his son. He said it would help encourage people to take better care of the environment in China.

"Change is certainly needed," he said. "In some Chinese toilets, people need to step on bricks to avoid stepping on dirty areas. How can you use toilets like that?"

One of the janitors who helps maintain the toilet complex, Zhang Min, 35, said the new facility was a great improvement over the old one, which was known for its fetid smells in summer.

"It's much cleaner now," she said. "There's even a shower room and a changing room for us workers."

She said most people had seemed to embrace the new technology, though a few complained that it was no longer possible to flush the toilet by kicking a handle. (A button must now be pressed.)

Some residents worry that the popularity of the new toilet and the presence of television screens and Wi-Fi will encourage guests to linger too long.

On a recent day, Li Peiling, 39, a dental assistant, grew restless after waiting five minutes for a stall. She began to shout at the row of closed doors. "Time's up!" she said. "Some of us need to get to work!"