9 things you should not miss in Guilin

Guilin is something of a fabled city – vivid and naturally beautiful with delicate clear rivers, tree covered limestone mountains and friendly inviting people. The scenery is simply incredible, so much so that it's almost impossible to speak about Guilin to a native Chinese person without hearing "桂林山水甲天下" – or "Guilin's mountains and water are the best under heaven." We think you'll agree and to help – we've put together 9 of our favourite destinations in Guilin. 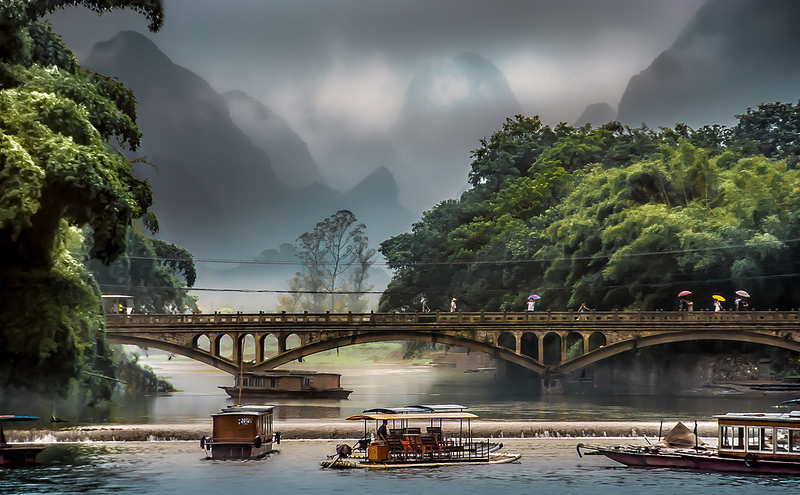 The Li River is indeed the stuff of legends, with its calm reflective waters that wind for 80km from Guilin to Yangshou, passing between vast karst mountains and lush forest terrain. One of our favourite sites is seeing the fishermen on their long boats at dusk fishing with their trained Cormorant bird – an ancient tradition which has its roots in Japan and was described as early as 636AD in the Book of Sui (the history of the Sui Dynasty of China). You can take boat tours through the river which is the best way to fully appreciate the beauty and tranquility of the area – though if you enjoy a little rafting then visit the Yulong River which is a great spot for bamboo rafting. 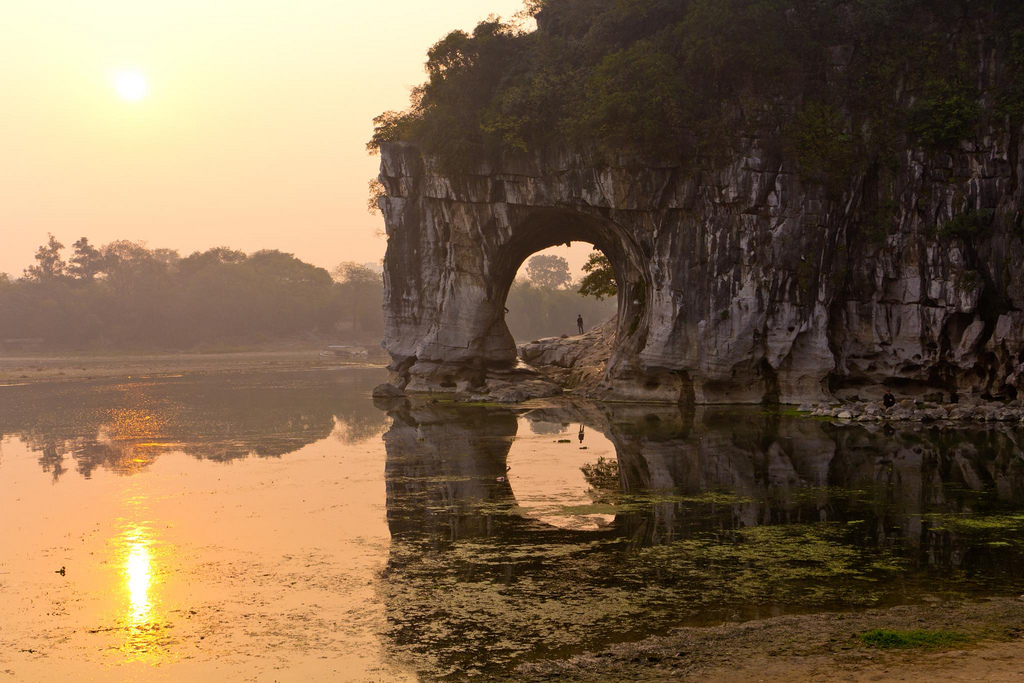 The Elephant Trunk Hill is not just the symbol of the city of Guilin, but also a beautiful rock formation that ends within the Li River. It's name is derived from the shape of the formation, which looks much like a gigantic elephant stretching its trunk into the water. There are two caves to explore here – the Water Moon Cave and the Elephant Eye cave – our favourite of which is the first – which, when the light is right, reflects a full moon-esque shape in the water – which is made all the more alluring by a full moon in the sky. Absolutely stunning! 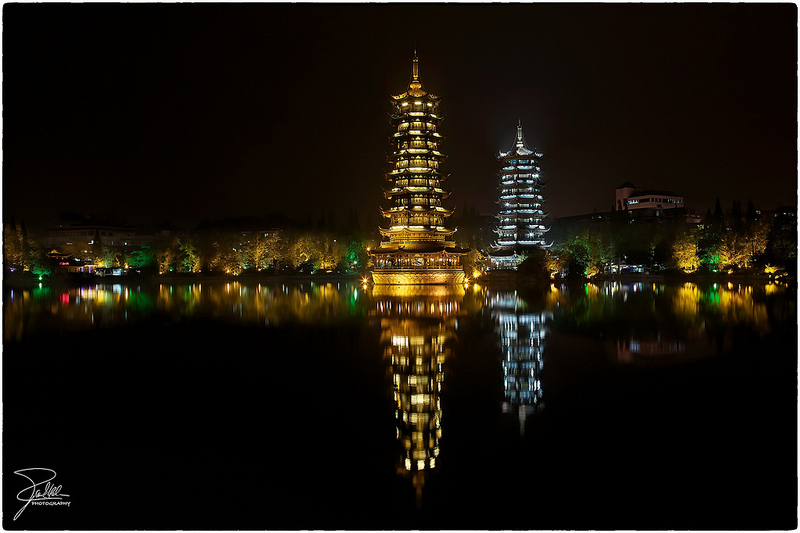 This park is right in the middle of Guilin and best experienced at night. Take a stroll through the gardens with the two imposing towers – the Sun Tower which is made entirely of copper and the Moon Tower which is made of Liuli (a type of glass not too dissimilar to stained glass but of a more durable quality). In the evening, the Sun Tower is cast in a warming orange glow, while the Moon Tower offers a more ethereal sombre quality which mimics moonlight. Take the boat tour of the gardens which passes through the replica bridges and pagodas of famous sites from around China. This is a perfect option for those on a family getaway to China who have small children – as they'll love the park, especially when it's illuminated. 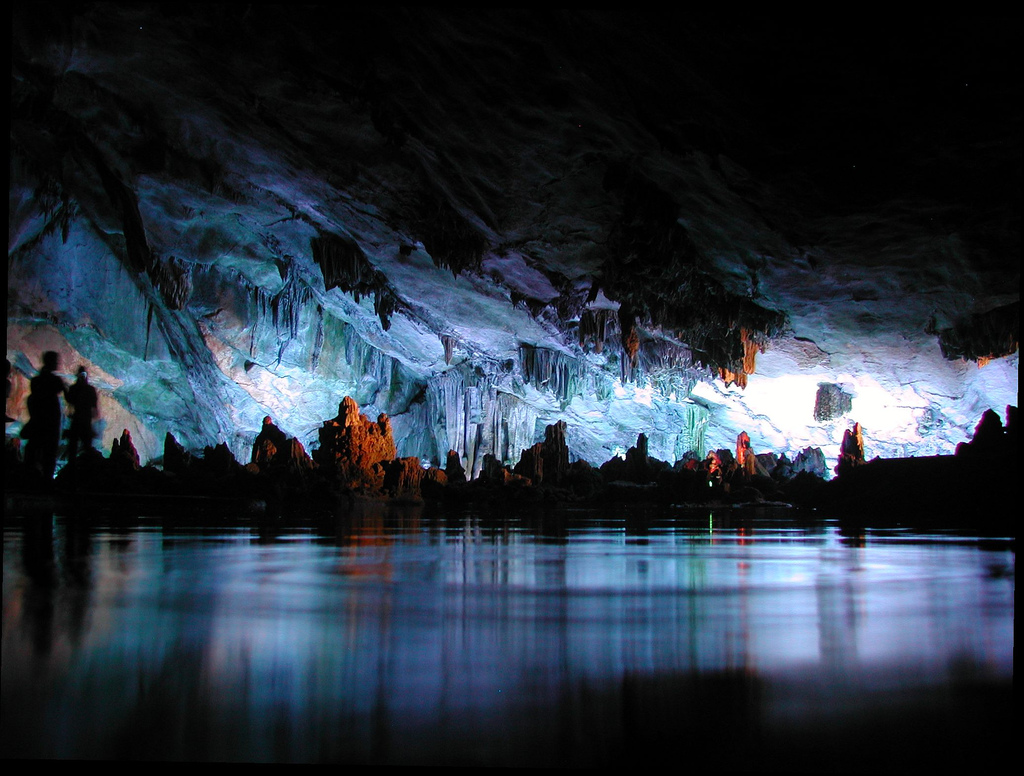 Guilin is a cave lovers paradise – there are many scattered throughout the landscape coming in all shapes and sizes and this is one of our favourites and possibly the easiest to reach from central Guilin – just five kilometres northwest of the downtown area. The intriguing name "Reed Flute Cave" comes from the  verdant reeds growing outside the cave, with which people make flutes. However, the real treat is found inside – you'll see various stalactites, stone pillars and rock formations created by carbonate deposition, all of which is Illuminated by coloured lighting lending the entire cave system an otherworldly, alien-esque atmosphere. 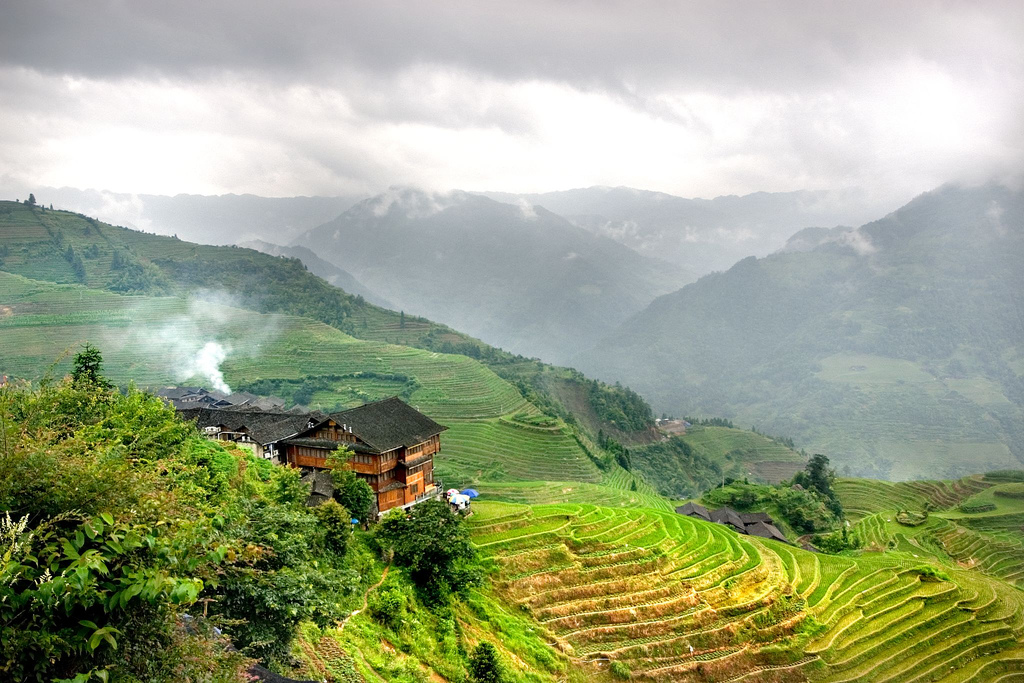 These striking rice terraces are a couple of hours drive from the city but all so very worth it. The rice fields rise up the hillside for as far as 1000 metres and are dotted by ancient villages, whose people have tended to the fields for generations. We suggest you take a full day to explore them and take the longer trek from Ping'an Zhuang Village to Dazhai Village through beautiful countryside hamlets, the villages of Zhouliu and Tiantouzhai, lush pine forests, and along the ridges of the fields themselves where you can take in fabulous views across the mountains. Intriguingly the terraces themselves are often referred to as Dragon Backbones by the locals. 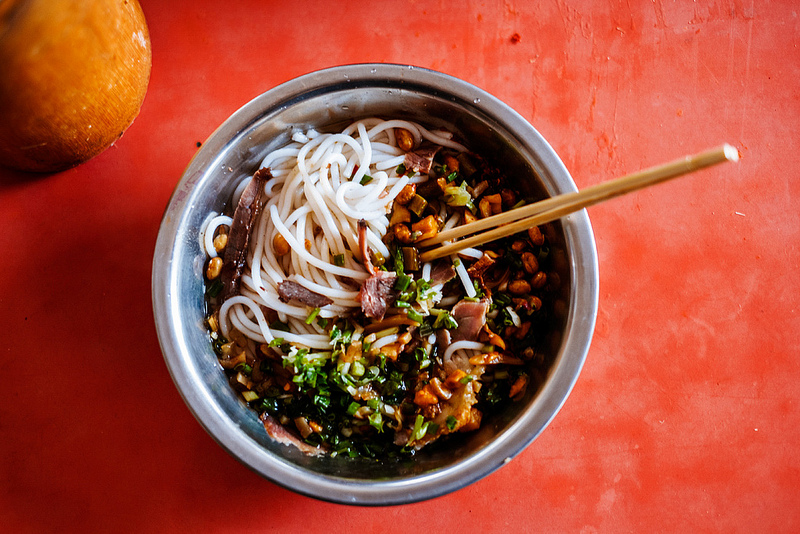 Guilin's central location has led the native cuisine to be influenced by a vast array of provincial cuisines such as those from Canton, Sichuan, Hunan, Zhejiang, Jiangxi, and Fujian. Most notable are the ranges of Guilin snack foods such as rice noodles (mifen) and glutinous rice dumplings (banli zong). Look out for a dish made of stewed clams and chicken, served with ham, vegetables and preserved longan which are stewed in a porcelain pot for several hours before being served and are said to be a good cure for coughs and colds. Many of the locals love to drink oil tea – we suggest you start with a gorgeous Gongcheng oil-tea with a side of simple snacks such as fried peanuts, soybean, rice balls and fried rice.

Cycle Through The Countryside 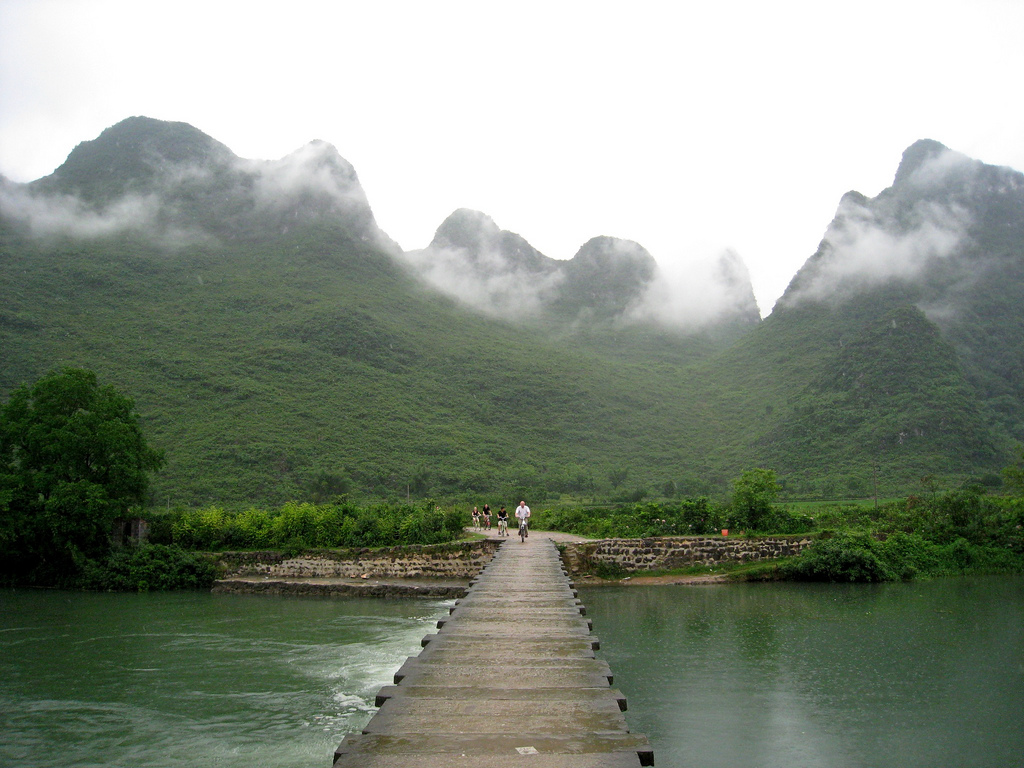 Guilin has a good amount of cycle hire spots and it's a great way to see both the city and the countryside. It's best to avoid the city streets if you're not very confident on a bike though as they can be a little busy and hard to navigate for those unfamiliar. However, once you're out in the open countryside you'll note that many of the paths are empty and a pleasure to ride. The countryside is perfect – with vast vistas of the mountains and the river curving along busy beaches and off into the horizon. An easy ride to get you started is from Yangshou to Aishan village and back, which is a pleasant scenic ride passing through paddy fields where you'll see farmers, buffalos and along the side of the infamous karst mountains. 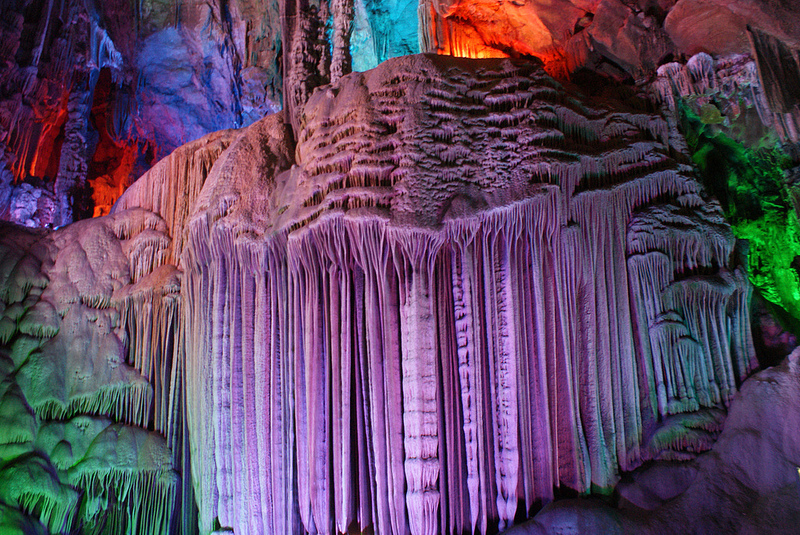 At 2,000 metres long – Silver Cave is Guilin's longest cave. It is an enchanting karst cave which runs through a staggering 12 mountains and is full of strange pillars, waterfalls and stalactites. The cave takes its name from the rocks inside which contain mineral crystal – which when coupled with the lights inside the cave, twinkle almost like millions of tiny silver stars embedded into the walls, floors and ceilings. 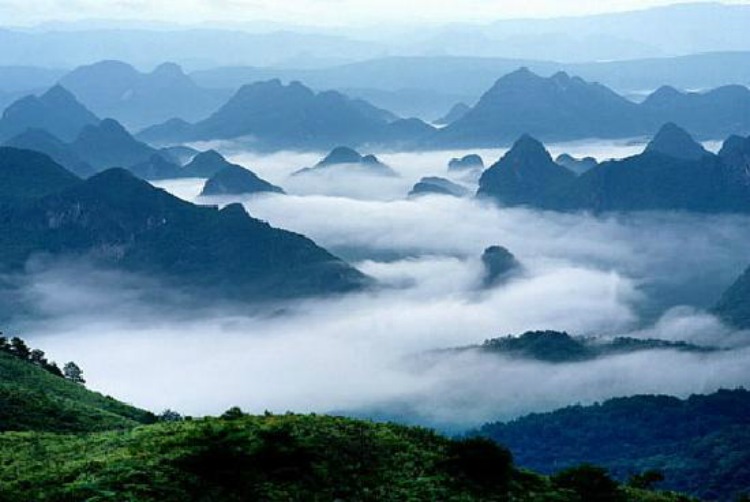 The views afforded from the resort at the top of this rather vertigo inducing cable car trip of 1400 metres are phenomenal. You'll ascend some 900 metres into the sky and once there will have 360 degree views of the entire Guilin area. Depending on the season the view does change – for example – in spring azalea flowers grow everywhere, in summer the bamboo shoots allover the mountain, in autumn the red maples coat the hill in an lush amber foliage and in winter the snow glistens like crystal. Also at the top are several temples including the White Deer Temple, the Yao Temple and the Jingijang King Tomb. When you're done with all of this – you can choose to either return the way you came – with the cable car –  toboggan car from top to bottom – through a curvaceous course of dips and turns through brooks, fields of flowers and of course the incredible karst mountains that make Guilin a heaven on earth.

0 responses on "9 things you should not miss in Guilin"