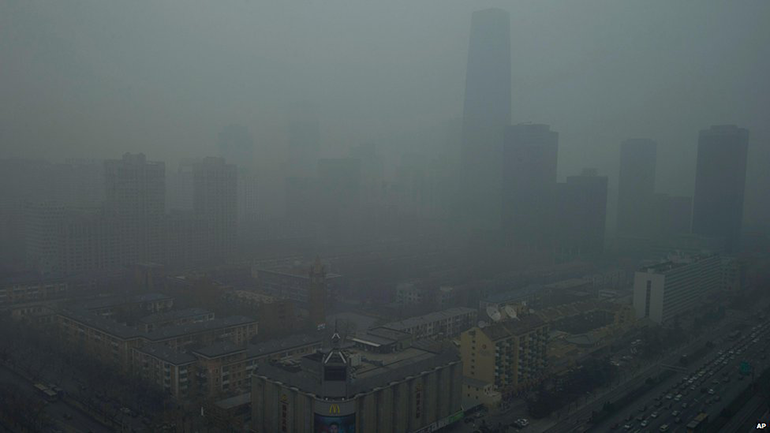 BEIJING — Wu Yiling, a 15-year-old student with a love of hamburgers and Hello Kitty, celebrated when she heard that her school was canceling classes for three days because of air pollution. Finally, she would be able to stay up late watching her favorite Korean soap operas, she imagined, and playing computer games with friends.

Yet at the crack of dawn on Wednesday, Yiling's mother jolted her out of bed.

Her literature teacher had assigned 100 pages of reading, including an intricate Song dynasty poem. Her mother had arranged a tutoring session with a math instructor. An English teacher had announced that there would be a six-part exam on Friday.

"I quickly learned that there's no such thing as a day off," said Yiling, who attends a high school in eastern Beijing. "Even when we can barely breathe outside, somehow we are supposed to do our schoolwork."

As smog blanketed this city for a second day on Wednesday, reviving calls for officials to take action, millions of families grappled with the unexpected closing of schools across the city.

Parents searched frantically for day care options. Teachers drew up impromptu lesson plans for use at home. Students who dreamed of leisurely breaks and trips to the mall braced for hours of drills and review sessions instead.

"It's hard to be at home and doing nonstop work," said Zhang Wei, 14, a student at a middle school in central Beijing. "I wish the skies were clear and we could play outside."

In online forums, students bemoaned the amount of work they had to complete over the three-day break.

"You may never know how badly we will be tortured by the teachers in the three days that we are home," an unidentified student wrote on a widely circulated post on Weibo, a microblogging service. "Kids in Beijing, go cry."

Several parents and students said they were concerned that school closings would become more frequent as the severe air pollution persisted. While Beijing has historically kept its schools open, no matter how poisonous the air, the government this week issued what it called a red alert for the first time, advising schools to close down from Tuesday through Thursday.

"Smog will be the norm in the future, so what are you going to do about it?" said Zhang Lili, 38, a university instructor in Beijing and the mother of an 8-year-old son. "Are we supposed to suspend classes whenever there is smog? Am I supposed to become a stay-at-home mother?"

As smog levels reached hazardous levels on Wednesday, parents hoarded face masks and bought air purifiers. Some said it was unsustainable to have students studying at home and questioned whether it was an effective safety precaution.

"Schools and homes share the same air pollution problem," said Chen Xiao, 35, a translator who is the father of a 9-year-old boy. "My son can still be hurt by smog."

Mr. Chen said the pollution had gotten so bad recently that his family was considering leaving Beijing.

Chinese parents invest extraordinary amounts of time and money to ensure that their children succeed academically, and many said they worried their children might fall behind if they were kept out of school too long.

School closings in Beijing are rare, given the city's dry climate and lack of snow. An exception was the outbreak of the SARS respiratory virus in 2003, when the city suspended classes for several weeks.

In issuing the red alert this week, Beijing officials told parents that while classes were suspended, students should continue studying. They encouraged parents to use the time to teach their children "life and safety" lessons. The government also unveiled a database of 5,000 lecture videos, covering topics like Chinese history and biology, on a state-run digital education platform.

Private tutoring companies, a booming industry in China, seized on the disruption caused by the smog to make a pitch for their products. Some offered extra tutoring sessions to help prepare for college exams. Others advertised online courses, saying that parents could return to work with peace of mind while their children studied at home.

At Beijing Jingshan School, a prestigious public school, teachers led online classes for students in subjects like math and Chinese. One class on Wednesday focused on the history of air pollution in China, making the argument that it was present even in ancient times, when fog and dust storms were common in Beijing.

At some of Beijing's most competitive schools, parents were asked to provide pictures of their children completing school assignments as proof that they were still studying. They happily complied, flooding online forums with snapshots of their children seated at desks and next to calculators.

He Mei, 40, a housewife in Beijing, said her daughter, He Xiang, 8, could have a healthier lifestyle by studying at home, taking more breaks and eating more fruit.

"Beijing is dirty and dry," Ms. He said. "Staying at home is good for her health."

Her daughter disagreed. "I don't like the smog," she said. "I want to go outside and play with my classmates."

When Ma Chenlei, 44, an engineer, and Wang Yanhui, 46, a salesman, first heard that the pollution in Beijing would reach hazardous levels this week, they decided to stay home with their two children until classes resumed. They have alternated study time with play breaks and occasional walks around the block, to make up for missed exercise classes.

"I don't like it, I cough a lot," said their 7-year-old daughter, Yifan. "When I wear a mask, I feel a little suffocated."

Inside the family's apartment on Wednesday, Yifan showed off her completed math and English homework, which she had sent to her teachers, while her 3-year-old brother, Yichen, played with racecars.

Ms. Ma said her daughter's school was planning to install air filters next year. In the meantime, she said, there was nothing they could do to alleviate the pollution.

"We hope that every day the air is clean," she said. "But it will take much longer than one or two days to solve this problem."