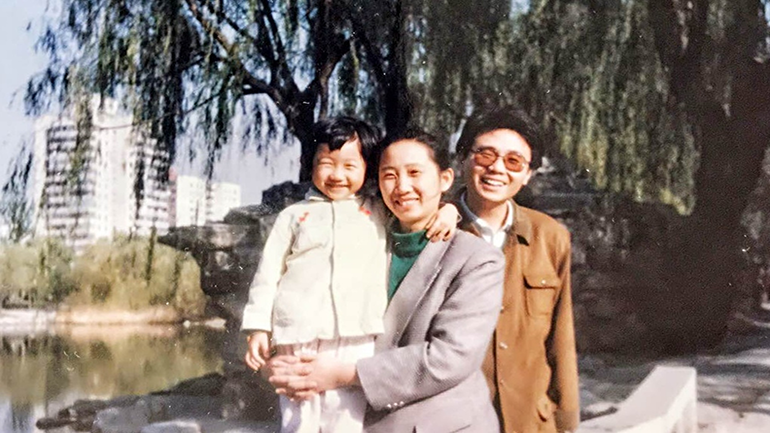 'As their only child, I'm precious, my parents love me too much,' says Bonnie, who was born

in Beijing in 1990, 11 years after China implemented its one-child policy. Photograph: Bonnie

In 1979, in the grip of a population crisis, China took extreme measures to halt its rapidly expanding society. It began limiting births to one child per couple and administered severe, sometimes barbaric, penalties for deviation from the rule. In October, after 35 years, the policy was scrapped.

Many people who have grown up as an only child recall loneliness, isolation and, occasionally, imaginary friends. According to a 2013 study by Australian researchers, only children exhibit traits such as selfishness, pessimism and risk aversion that are not as prevalent in children with siblings. These findings click with commonly held views that only children, more often than not, are seen as having been dealt a bad hand.

"It is true that when both of my parents went to work, I ended up spending a lot of time alone at home and that might be one of the reasons that I am more of an introvert. But I am extremely lucky to have been born in an era of economic boom in China, so that my parents could let me try out different extracurricular activities, and ultimately send me to the US to study."

"You could argue that I am being a typically selfish only child, or that I just don't understand how having siblings really works, but I loved being the centre of attention," Jessica said.

According to the Communist party ruling, 400m births were prevented, which they say has contributed to the country's dramatic economic takeoff. China has an unusually well-educated population: more than 85% of children born in the 1990s have attended high school. According to Unesco, the average for east Asia is 61% .

When the news broke that China was scrapping its policy last month, people took to social media to celebrate and ask why the change had taken so long.

"I was a pretty lonely child, and I always had an imaginary sisters or brothers. I waited for a real brother or sister when I was young and it never happened and I didn't know why. I guess we really are the loneliest generation", said Bonnie, a 24-year-old journalist living in Beijing.

Experts predict that the relaxation of family planning rules is unlikely to have a lasting demographic impact, particularly in urban areas. Demographers in and outside China have long warned that its low fertility rate – which experts say lies somewhere between 1.2 and 1.5 children per woman – was driving the country towards a demographic crisis and catastrophic gender imbalance. China now has more men than women, meaning that millions will never find female partners.

Twenty-one-year-old Peter, from the mountain city of Shiyan in Hubei province, thinks the change is positive for China's economy and people's personal freedom and fulfilment, but can't see any impact on his own life.

"I'm not married and I don't see it coming soon either, but I would like to in the future and hopefully I can afford to have two children. I've lived with two different host families in the past, and it was a nice experience to have brothers and to be someone's brother. It also brings more fun to the family."

The lack of interaction with siblings, and an understanding of what it means to be part of a larger family unit, is a worry for some of China's lonely generation. Haiyue, 25, believes the attention and money lavished on some only children has created a generation lacking in life skills.

"There is a very small proportion of our generation that turn out terribly as they have huge amounts of money and very little discipline. It's no different to how some of the trust-fund kids behave in the UK, but with more inequality in the country it feels more obscene. Obviously this is a huge oversimplification and most of them turn out totally fine," she said.

By about the middle of this century, one person in every three in China is forecast to be over 60, with a dwindling proportion of working adults to support them. Smaller close family units means less available support but more pressure on the only child to care for family members in old age. Bonnie worries about how she and her husband will cope looking after four elderly people and two children.

The number of people who are sent to nursing homes is increasing. Traditionally, the great majority of old people live on their own or with their spouse, children, siblings, or other relatives. But we are young and always busy with study or work, with no time or energy left to look after our parents.

With less certainty of creating their own families due to financial pressures, China's lonely generation may be destined to be the loneliest generation after all.

0 responses on "How do 'loneliest generation' see one-child policy?"