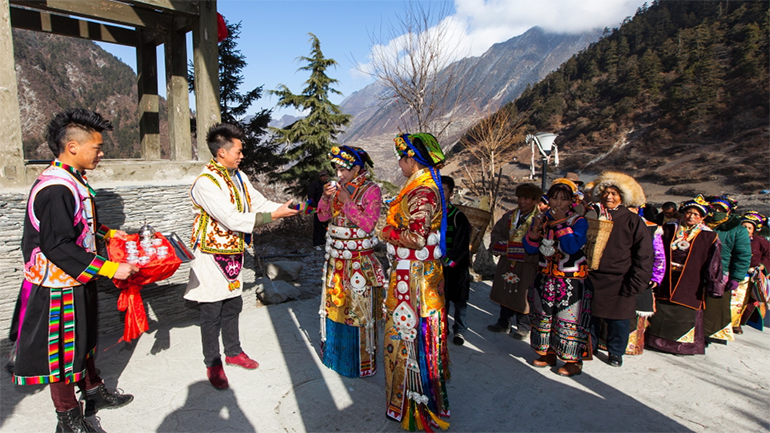 In Jinchuan County of Aba State, the northwest of Sichuan province, there lives Jiarong Zangzu (嘉绒藏族) people, who carry on their old simple wedding customs till today.

In the early morning of her wedding, the bride, accompanied by several of her closest relatives, is carried by her elder brother on his back out of the gate of their village amid the music played by Mantong and Suona horn, the local woodwind instruments. The bride and her close girlfriends cannot help crying. The cry shows her excitement for new life and reluctance to leave her parents' home. The villagers are singing folk songs at the roadsides," We are bidding farewell to our girl. You should take good care of her. Hope you will have a good fortune and a pleasant journey." People who come to meet the bride sing back," Please rest assured. We will be kind to her. Everything will be perfectly satisfactory as you wish."

When the bride comes to the bridegroom's village, many villagers have been waiting for her at the gate. The bride's uncle pays sincere tribute to the heaven, the earth and the God of mountains with a branch of cypress dipping in clean water (named Sacred Water).

When the bride arrives at her husband's home, the first problem the bridegroom facing is to distinguish his bride from two girls dressed the same and both covered with a red kerchief on their heads. It is not a easy job. Finallly he identifies his bride by the bracelet and ring he sent her as tokens. Then the red kerchief is off and the bride meets the villagers who are attending their wedding.

The wedding is going on with the bride's uncle as the head, which hints the trace that, in ancient time, Jiarong Zang Nationality was centralized by women. Although Jiarong Region has long passed the time of matrilineal society in which people knew only their mother, not knowing who is their father, it still follows the pattern the elder brother acts as the protector of his brothers and sisters.

The wedding of Jiarong Zang Nationality is grand and sacred. From the very beginning to the end, people are singing and dancing day and night. But the most peculiar thing is that the bridegroom cannot live with the bride at the wedding night, even has no chance to speak with her or touch her finger. The bride's girl companion is always with her. The next day, the bride will return to her parents' home to live for some time, then comes back. From then on, the couple's new life really begins.

The next day, when the bride's uncle is going to leave the village with his niece, the villagers, especially young people, come to say good-bye to them. Two youths pull a red silk fabric along the roadsides to stop their way, which is named " Red Block ". Some one comes up to daub some white flour on the bride's relatives' foreheads, then let them go under the silk fabric. Jiarong Zang Nationality upholds white very much. They show their blessings for their relatives, neighbors and their life by daubing white flour on each other.

The wedding ceremony of Anduo Zang Nationality (安多藏族) on Aba Grasslands is quite different. Years ago, this nationality led a nomadic life generation after generation. They had to move three to four times every year by the change of seasons, settling down along those places with adequate grass and water. With the approach of modern civilized life, the herdsmen have their residential area to settle down. But their weddings are still connected with tents. On that day, two parties made up of the bride's and the bridegroom' relatives bring articles for a grasslands family's basic daily use and two half tents prepared for the bride and the bridegroom. With the sound of a whistle, the bridegroom's fellows quickly drive piles and pull ropes to prop up half of a tent. The other party is not to be outdone. They set up the other half of the tent with the same sophisticated skill. When the two halves conbine flawlessly as one, a new home comes into being in the grasslands. People cast Sanlongda, a kind of paper with blessing drawings on it, towards the new couple and bless them a good fortune.

0 responses on "Wedding customs of Jiarong and Anduo Zang minorities"