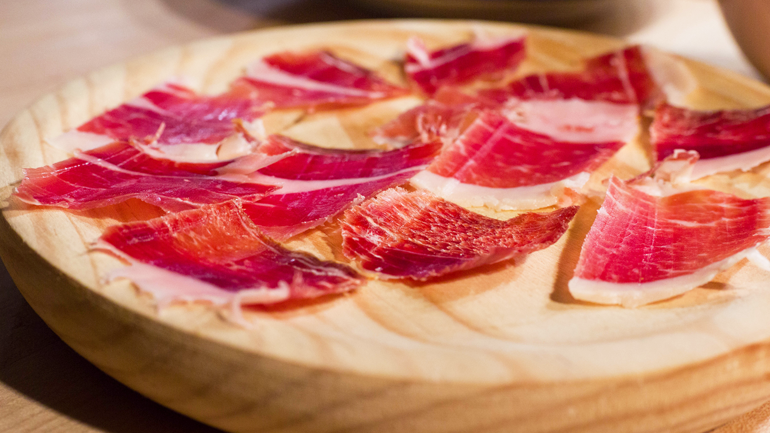 Today, Spain's Ibérico hams are increasingly sought after worldwide, particularly among Chinese consumers concerned about the safety of their own homegrown food.

"Spanish ham is a very unique product, but it's also seen as healthy, which is a real asset when you're selling to the Chinese," said Oliver Win of Olivier Pacific Limited, a fine foods distribution company based in Hong Kong that imports the Cinco Jotas brand of Spanish ham.

Spain's producers, in fact, took no small measure of umbrage at the World Health Organization's attempt to lump their luxury ham together with cheaper products like processed sausages and hamburger meat.

A single leg of the finest ham from Cinco Jotas — weighing almost 18 pounds — costs about $670 in Spain. (In the United States, the price is about double.) Even the way the ham is sliced is considered something of an art form.

"This ham is as natural as food can get — no added heavy metals, preservatives or colorings — and it comes from an animal that has built up muscle by eating the best food and exercising a lot in beautiful surroundings," said José Gómez, the owner of Joselito, another top brand of ham. "There are thousands of products that present a higher cancer risk."

With a passion for pork products, and rising incomes, the Chinese have entered the market for Ibérico hams with gusto, even while paying slightly more for Spanish ham than prices set for the American market. The next step, according to Spanish producers, is to get China to lift a cumbersome restriction that forces them to remove the bone from the leg.

In fact, the Chinese appetite for Spanish pork stretches all the way down its production chain, including innards that Spanish companies struggle to export to many Western countries.

Fresh pork exports to China from Spain — including heads, ears and other parts — rose 35 percent last year, making it the second-largest market in volume after neighboring France, according to figures from the Spanish Meat Export Office.

Last year, Fosun, one of China's largest financial and industrial conglomerates, bought a stake in the parent company of Cinco Jotas, one of Spain's top brands of Ibérico ham, which is based in Jabugo.

"We generally think that our culture is closer to that of America, but when it comes to ham, Chinese gastronomy is really in tune with ours," Bernardino Rodríguez, the general director of Cinco Jotas, said during a tour of cellars where legs of ham are hooked from the ceiling and left to age.

"I can't think of anybody more capable of distinguishing between different qualities of ham than the Chinese," he said.

Today, Francisco Espárrago, the chairman of Señorío de Montanera, a midsize producer of ham, said he found it much easier to get Chinese importers, as opposed to those in the United States, to view Spain's best ham as a luxury product.

"The Americans believe that everything should follow their own processes, so they don't seem to understand that allowing the ham to sweat in the heat spreads the flavor but doesn't destroy the meat," he said. "For the Chinese, that concept isn't a problem."

The finest Ibérico ham is produced in southwestern Spain, a region that also has strong weather changes.

For instance, Jabugo has some of Spain's heaviest rainfalls, resulting in a damp winter climate that helps spread the salt into the meat as it is cured, using a method dating to Roman times. The hot summer months, in contrast, favor the so-called sweating and drying of the ham.

"If you don't have the right climate, you simply can't produce," Mr. Gómez of Joselito said. "Ham is a bit like wine, because several small steps and adjustments make all the difference between an average product and premium quality."

The growing Chinese fascination with the hams has also been helped by an increase in Chinese visitors to Spain, where they have the opportunity to taste firsthand the country's wide array of pork-related gastronomy.

"We open at 1 p.m., and the first clients who then cross the door are now almost certainly Chinese," said José María Ruiz Benito, the owner of the eponymous José María restaurant in Segovia, famous for its roasted suckling pig.