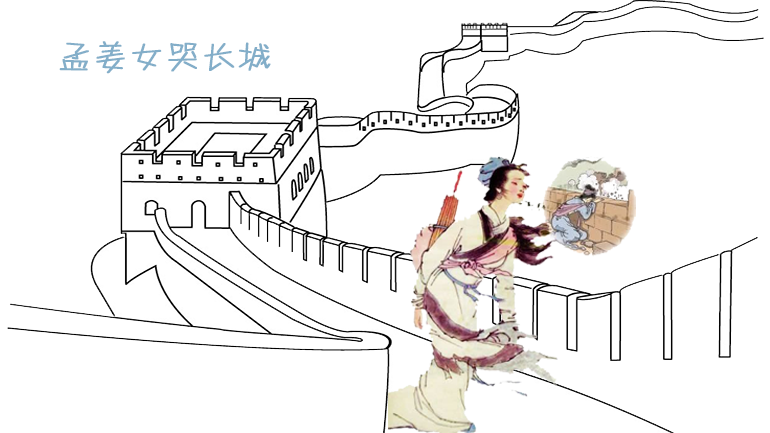 A little over two hundred years before our era, the first emperor of the Qin dynasty ascended the throne under the name of Shi Huang. This emperor was very cruel towards his subjects, forcing people from every part of the country to come and build the Great Wall to protect his empire. Work never stopped, day or night, with the people carrying heavy loads of earth and bricks under the overseers' whips, lashes, and curses. They received very little food; the clothes they wore were threadbare. So it was scarcely to be wondered at that large numbers of them died every day.

There was a young man, named Fan Xiliang, among those who had been pressed into the service of building Emperor Shi Huang's Great Wall. This Fan Xiliang had a beautiful and virtuous wife, whose name was Meng Jiangnv. For a long, long time after her husband was forced to leave her, Meng Jiangnv had no news of him, and it saddened her to think what he must be suffering, toiling for the accursed emperor. Her hatred of the wicked ruler grew apace with her longing for the husband he had torn from her side. One spring, when the flowers were in bloom and the trees budding, when the grass was a lush green, and the swallows were flying in pairs in the sky, her sorrow seemed to deepen as she walked in the fields, so she sang:

In March the peach is blossom-dressed;

Two by two they gaily fly….

Left all alone, how sad am I!

But even when autumn came round, there still was no news about Fan Xiliang. It was rumored that the Great Wall was in building somewhere way up north where it was so cold that one would hardly dare stick one's hands out of one's sleeves. When Meng Jiangnv heard this, she hurriedly made cotton-padded clothes and shoes for her husband. But who should take these to him when it was such a long way to the Great Wall? Pondering the matter over and over, she finally decided she would take the clothes and shoes to Fan Xiliang herself.

It was rather cold when she started out. The leaves had fallen from the trees and, as the harvest had been gathered in, the fields were empty and forlornly dismal. It was very lonely for Meng Jiangnv to walk all by herself, especially since she had never been away from home in her life, and did not know the way and had to ask for directions every now and then.

One evening she failed to reach a town she was going to, so she put up for the night in a little temple in a grove beside the road. Having walked the whole day, she was very tired and fell asleep as soon as she lay down on a stone table. She dreamed her husband was coming towards her, and a feeling of great happiness enveloped her. But then he told her that he had died, and she cried bitterly. When she woke up in the morning, she was overwhelmed by doubts and sadness as she remembered this dream. With curses on the emperor who had torn so many families asunder, Meng Jiangnv continued on her way.

One day, she came to a small inn by the side of the hilly road. The inn was kept by an old woman who, when she saw Meng Jiangnv's hot face and dusty clothes, asked where she was going. When Meng Jiangnv told her, she was deeply moved.

"Aya!" she sighed, "the Great Wall is still far away from here, there are mountains and rivers to cross before you. How can a weak young woman like yourself get there?" But Meng Jiangnv told the old woman she was determined to get the clothes and shoes to her husband, no matter what the difficulty. The old woman was as much touched by the younger one's willpower as she was concerned about her safety. The next day she accompanied Meng Jiangnv over a distance to show her sympathy.

And so, Meng Jiangnv walked on and on and on till, one day, she came to a deep valley between the mountains. The sky was overcast with gray clouds, a strong wind was blowing that chilled the air. She walked quite a long time through the valley without, however, finding a single house. All she could see were weeds, brambles and rocks. It was getting so dark that she could no longer see the road. At the foot of the mountains there was a river, running with water of a murky color. Where should she go? Being at her wit's end, she decided to spend the night among some bushes. As she had not eaten anything for the whole day, she shivered all the more violently in the cold. Thinking of how her husband must be suffering in this icy cold weather, her heart contracted with a pain as sharp as a knife. When Meng Jiangnv opened her eyes the next morning, she found to her amazement the whole valley and her own body covered with a blanket of snow. How was she to continue her travel?

While she was still quite at a loss as to what to do, a crow suddenly alighted before her. It cawed twice and flew on a short distance, then sat down again in front of her and cawed again twice. Meng Jiangnv decided that the bird was inviting her to follow its direction and so she resumed her travel, a little cheered because of the company of this living thing, and she began to sing as she walked along:

Thick and fast swirl round the winter snows:

A starveling crow, alas, my only guide,

The Great Wall far, and I far from his side!

And thus many a dreary day had passed before she at last reached the Great Wall. How excited she was when she caught sight of it, meandering like a huge serpent over the mountains before her. The wind was piercingly cold and the bare mountains were covered with dry grass only, without a single tree anywhere. Clusters of people were huddling against the Great Wall; these were the people who had been driven here to build it.

Meng Jiangnv walked along the Great Wall, trying to find her husband among those who were toiling here. She asked after her husband, but nobody knew anything about him, so she had to go on and on inquiring…. She saw what sallow faces the toilers had, their cheekbones protruding through the skin, and she saw many dead lying about, without anybody paying any attention. Her anguish over her husband's unknown fate increased, so that she shed many bitter tears as she continued her search.

At last she learned the sad truth. Her husband had died long ago because of the unbearably hard toil, and his body had been put underground where he fell, under the Great Wall. Hearing this tragic news, Meng Jiangnv fell into a swoon. Some of the builders tried to revive her, but it was a long while before she regained consciousness. When she did, she burst into a flood of tears, for several days on end, so that many of the toilers wept with her. So bitter was her lament that, suddenly, a length of over two hundred miles of the Great Wall came crumbling down, while a violent storm made the sand and bricks whirl about in the air.

"It was Meng Jiangnv who, by her tears, caused the Great Wall to crumble!" the people along the edifice told one another with amazement, at the same time filled with hatred of the cruel emperor, who caused nothing but misery to his subjects.

When the emperor heard how Meng Jiangnv had brought part of his Great Wall down, he immediately went to see for himself what sort of person she was. He found that she was as beautiful as a fairy, so he asked her to become his concubine. Meng Jiangnv who hated him so deeply for his cruel ways would, of course, not consent to this. But she felt a ruse would serve her purpose better than frankness, so she answered amiably: "Yes, I will, if you do three things for me." The emperor then asked what these three things were and Meng Jiangnv said: "The first is that you bury my husband in a golden coffin with a silver lid on it; the second is that all your ministers and generals go into mourning for my husband and attend his funeral; the third is that you attend his funeral yourself, wearing deep mourning as his son would do." Being so taken with her beauty, the emperor consented to her requests at once. Everything was, therefore, arranged accordingly. In funeral procession, Emperor Shi Huang walked closely behind the coffin, while a cortege of all his courtiers and generals followed him. The emperor anticipated happily the enjoyment the beautiful, new concubine would give him.

But Meng Jiangnv, when she saw her husband properly buried, kowtowed before his tomb in homage to the deceased, crying bitterly for a long time. Then, all of a sudden, she jumped into the river that flowed close by the tomb. The emperor was infuriated at being thwarted in his desires. He ordered his attendants to pull her out of the water again. But before they could seize her, Meng Jiangnv had turned into a beautiful, silvery fish and swam gracefully out of sight, deep down into the green-blue water.