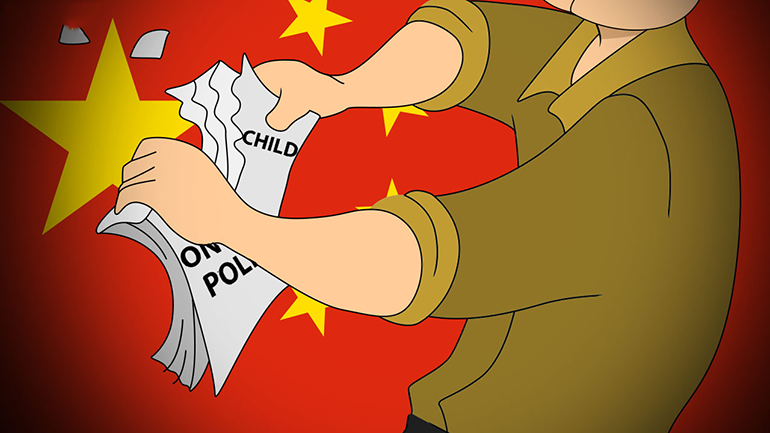 China delayed scrapping its one-child policy out of fear that the population would expand too rapidly, a senior official said on Tuesday — despite the fact demographers say the birth rate was already dwindling before it was introduced in 1979.

Beijing decided last month to relax the restriction — one of the most draconian social experiments in modern history and for long the focus of criticism overseas and resentment at home — and allow all couples to have two children.

The government has been under domestic pressure to end the policy, which has contributed to an ageing society and a shortage of workers.

Wang Pei'an, vice-minister of the National Health and Family Planning Commission, told reporters that officials had been influenced by research that implied an end to the one-child policy would lead to a spike in births.

Mr Wang said a study of the nation's population growth between 2006 and 2008 showed 80 percent of Chinese couples wanted one boy and one girl. That survey, combined with German research estimating families must average three children to have at least one of each, alarmed family planners, he said.

They instead opted for a phased approach, first allowing two urban parents who were both single children to have a second child, then couples where just one was an only child and finally allowing a second child for all, Mr Wang said. He would not explain why those steps took so long to roll out.

"The three steps weren't public at the time," he said. "It was very sensitive."

Demographers say China's zealous planners may have overshot amid low birth rates among more prosperous urban Chinese. The concession on a second child where just one parent was a singleton, which was expected to result in 2m more births annually, led to fewer than 1m couples requesting permission last year.

In February 2008, Zhao Baige, then vice-minister of family planning, told foreign reporters in Beijing that China would ultimately scrap the one-child policy but did not give a timetable. She also said planners were alarmed at the severe imbalance in the numbers of boys and girls in China.

The average number of children that would be born to each woman had decreased to an estimated 1.8 at the time. Now, with every couple allowed two, planners project the average number for women of child-bearing age will rise to 1.93, still below the replacement rate of about 2.1.

Mr Wang rejected the suggestion that China should do away with population control policies altogether.

China's restrictions prevented further strain on limited natural resources and allowed citizens to enjoy prosperity, full meals and adequate clothing, Mr Wang said — a common defence of the policy. "Development and the interests of the country are still incompatible with a large population," he said.

Couples in most of the rest of east Asia, as well as in western Europe, have voluntarily chosen to have fewer children as living conditions improve and costs rise, without resorting to China's recipe of punitive fines, forced abortions, involuntary sterilisation, or removal of out-of-plan children by the state.