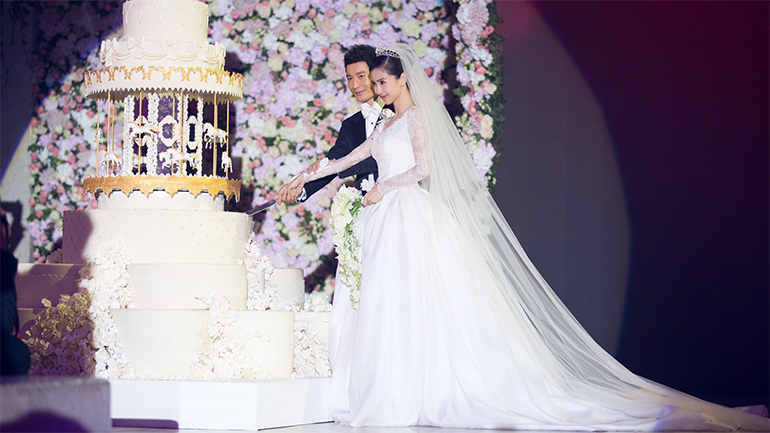 An actress, singer and model dubbed the Kim Kardashian of China has tied the knot in a lavish £20 million ceremony, complete with a ten-foot tall wedding cake, a holographic castle and a custom Dior gown. And the day wouldn't have been complete without 2,000 of her closest friends.

Yang, known as Angelababy, who started modeling at the age of 14 and is now considered one of Asia's biggest stars, married leading actor Huang Xiaoming in Shanghai last week.

The 26-year-old's stunning dress took five months to create and was made using hundreds of feet of satin organza and tulle.

Asia's biggest names were among the thousands who attended the wedding – which reportedly cost twice as much as the real Kim Kardashian and Kanye West's wedding in Florence last year.

The entire venue, Shanghai Exhibition Center, was filled with thousands of roses and the cake – which is believed to have taken a month to make – was designed to look like a carousel.

Each of her 2,000 guests was reportedly given a bag full of gifts, including a mobile phone. Her ring, an enormous six-carat diamond from Chaumet, is said to have cost £1m.

And before the big day, which was live-streamed online, the bride and groom posed for portraits in Paris and the images were displayed on screens around the venue.

0 responses on "What does a £20 million celebrity wedding look like?"