Epitome of future China seen from ‘silver tsunami’ in Rudong 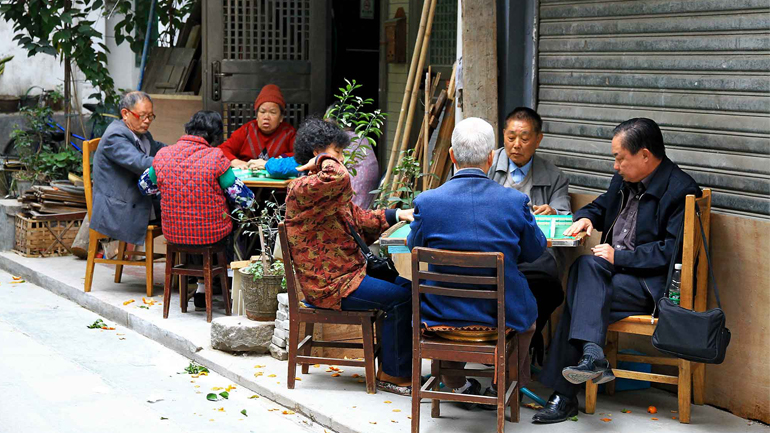 Throughout China the one-child policy is dying out — but nowhere quite so fast as in Rudong, where it all began.

Rudong, on the eastern coast to the north of Shanghai, was one of the first counties to outlaw every baby after the firstborn, about a decade before the one-child policy took effect in most of China in 1979. Now it's the first to face the consequences: a silver tsunami of old people.

All of China is ageing but Rudong is doing so faster: all those babies who were never born are not around now to look after all those parents who never bore them, so the population is heavily skewed to the elderly. And that has big implications for everything from old-age homes to local government financing to the mental health of the county's pensioners.

Nearly 30 per cent of the county is over 60 — double the national average. And that means Rudong is filled with the ghosts of a China yet to come, when "grandparents" will be everywhere.

Just inside the gate of Rudong's Caobu Town old people's home is a gaggle of elderly men, many of whom sport the Ho Chi Minh beards and proletarian flat caps of a much earlier era.

They are about to be joined by a large influx of new residents: for this state retirement home is nearly tripling in size, to 200 beds, and renovating rooms to include everything from air conditioning to flat-screen televisions. Ma Yunfei, who runs the place, puts this down to the success of Rudong's one-child policy.

I guess you could say Rudong is a victim of its own success — but Ji Dexiang, 70, doesn't see it that way. He just sees what he and his neighbours in the county have achieved. "China's population was large and everyone needed food, clothing and education. We could have a better life if the population was reduced," says the former factory worker.

Mr Ji's only child died, so now he is a ward of the state. "Because I listened to what the government said and didn't have a second child, the government is now my child and will look after me," he says.

Wang Feng, a Chinese demographer says Rudong prefigures an ageing crisis that will hit China harder than it need have done because the shift to an overhang of elderly will happen so fast.

But that is not the only unintended consequence of the population policy, writes Mei Fong in her excellent new book, One Child: the Past and Future of China's Most Radical Experiment.  "The idea of approaching childbearing with a mindset that is three parts calculation has become ingrained in the Chinese psyche," she writes.

Mr Ji, for example, gave up that second child so that the state would not have to buy an extra pencil. He may not have grandchildren but he will soon have a flat-screen TV and a renovated bathroom. Forget the nanny state, this is the granny state. The question is how long Beijing can afford such filial duty.