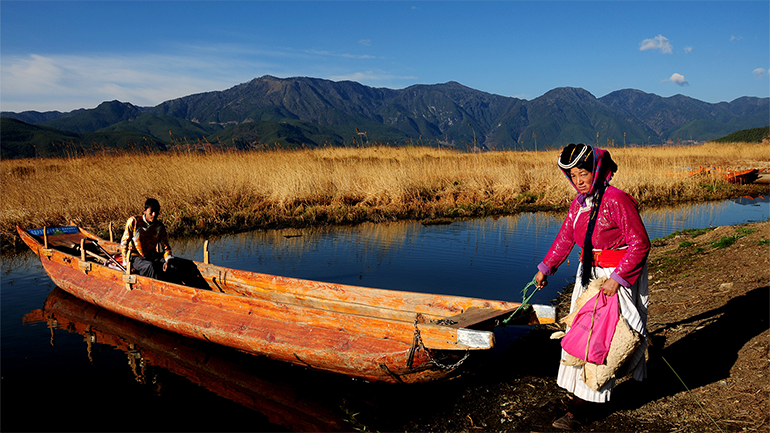 A young man clad in a white shirt, black pants and red belt suddenly scrambled up the side of a log house and slid feet first into a second-story latticed window.

"This is how Mosuo men would climb into the 'flower room' of the women," Ke Mu explained to visitors as the triumphant swain stuck his head out the window of the flower room, or private bedroom, and waved his hat.

It was morning in the lakeside village of Luoshui here in southwestern China. On a narrow side street, dusty from hotel construction nearby, a group of young workers, including Ms. Ke, 18, was preparing for another day of cultural pageantry at the Mosuo Folk Museum.

Their task is to showcase the traditions of the Mosuo, a minority ethnic group said to be the country's last matrilineal society, where children take their mothers' surnames and daughters are preferred to sons.

A fascination with such traditions has led to a booming tourism industry in this once-isolated region.

Lured by the promise of spectacular natural beauty and exotic cultural experiences, hundreds of thousands of visitors, mostly Chinese, are making the journey to Lugu Lake, nestled on a plateau in the mountains between Yunnan and Sichuan provinces.

Lively as its traditions seem, however, the Mosuo community is facing a crisis. As its interaction with the wider society increases, residents and outside experts fear that the group's unique cultural practices are facing a grave threat.

Experts say that the population of Mosuo in the Lugu Lake region, estimated to be about 40,000, is decreasing as more young people marry outside the group or move to larger cities for work. And without a written language, Mosuo culture is particularly vulnerable to disappearing.

Even within the community, young Mosuo are increasingly choosing marriage over the foundation of Mosuo culture: the centuries-old practice of tiesese (pronounced tee-say-say).  Traditionally, a Mosuo woman might have several tiesese relationships during her life, sometimes simultaneously. Though this has changed as outside values of monogamy and lifetime partnership seep in.

With tiesese, sex is kept separate from family, and men and women are generally expected to spend their lives in the houses in which they were born. As a result, sexual partners rarely occupy the same dwelling.

In traditional Mosuo culture, family life is structured around the basic social unit, known as the "grand household," in which children are raised by their mother and her side of the family. And while children typically know their biological fathers, maternal uncles are responsible for taking on the paternal role, helping to raise and provide for their sisters' children.

According to Chuan-Kang Shih, an expert on the Mosuo and an anthropology professor at the University of Florida, the system is underpinned by a fundamental belief that women are more capable than men, mentally and even physically. The Mosuo also believe that everything people value in the world came from a woman, not a man.

"The system makes so much sense when you think about the overall ways in which family systems have to navigate between sexual desire, stability, domesticity and claims for children," said Judith Stacey, a professor of sociology at New York University who has written about the Mosuo.

"But it depends on a lack of mobility, which is why now, with all of this inequality as well as economic and geographic mobility, it can't survive as a system," Professor Stacey said.

0 responses on "Mosuo culture facing extinction due to booming tourism"