How to eat Peking Duck

The title of this post is misleading: it's actually not that difficult to figure out how to eat Peking duck as a foreigner. The menus at the restaurants all have pictures (and barring that, you can always pantomime a duck, which serves the dual purpose of placing an order and entertaining the waitstaff), and the waitstaff will baby you through every step of the process.

The only real decisions you need to make are a) which restaurant to go to, b) what side dishes to get, c) what quality of duck you want, and d) if you'd like it with garlic or without.

After that, just sit back and let the waitstaff carry you through your meal. Here's how it'll go. 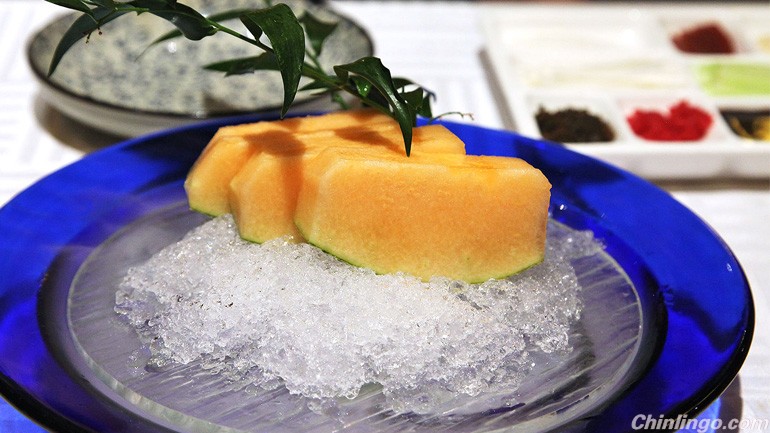 Meals start with fresh seasonal fruit. In my case, cantaloupe, followed by your chosen starters and side dishes. When your duck is ready for you (and not the other way around), it'll be carted out into the dining room on a large platter by a knife-wielding chef. 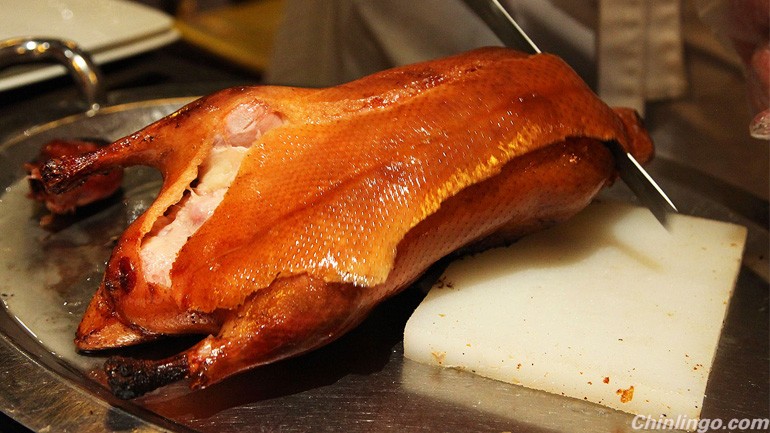 The chef starts by cutting off the head and carefully splitting it in half, revealing the ducks brain—intended to be eaten at the end of the meal. He goes on, removing the skin from the breast of the duck in three wide strips. Watch carefully, because it takes literally seconds from start to finish. 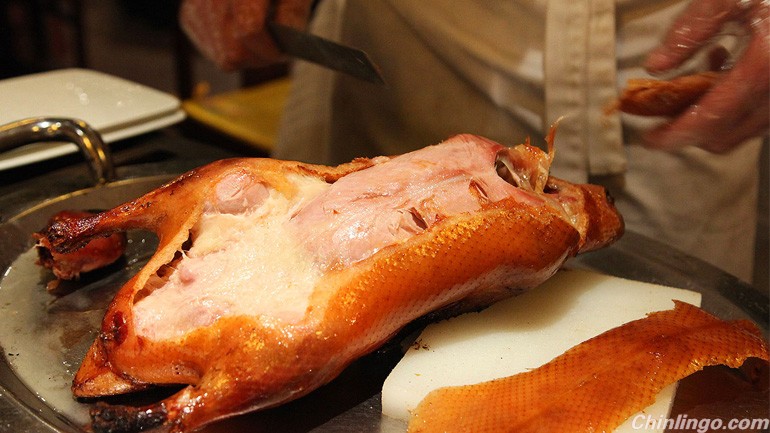 The most incredible part is that the flesh underneath is completely undisturbed—you can clearly see the space where the inflated skin has pulled away from the meat. 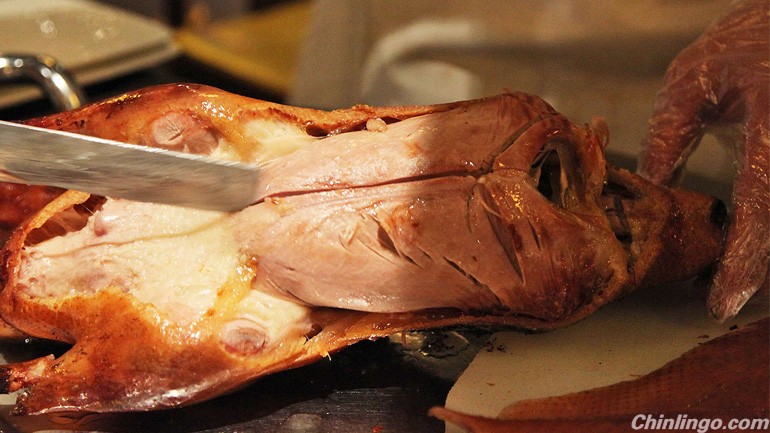 Next he uses the tip of the knife to slice out the breasts of the duck. The breasts are then sliced on a bias into thin slivers. I can tell you from years of experience that slicing hot, fall-apart tender meat like this requires an insanely sharp knife. The skin from the breast is sliced similarly, at an even sharper bias. 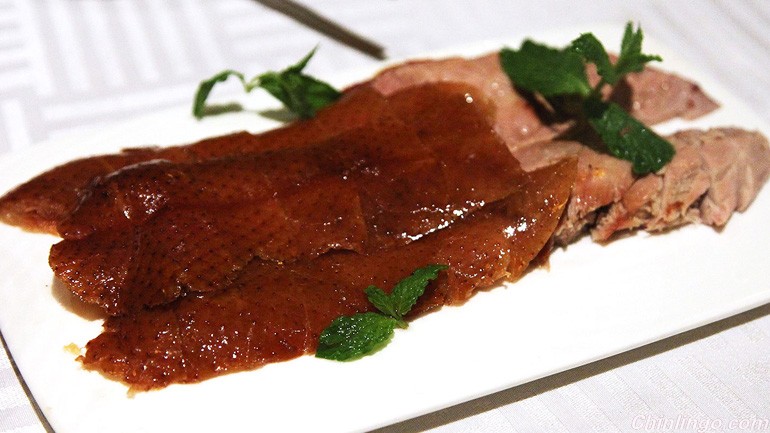 The chef lays the slivers of breast meat and skin onto a clean platter and places it on the table, urging you to dip the slivers of skin into a small dish of sugar placed in front of you. That first bite of hot skin goes into your mouth shatteringly crisp, but almost instantly melts over your tongue in a wash of sweet, savory, smoky duck fat.

I opted to watch, turning away every few seconds to nab a quick bite, hoping that I didn't miss any of the action. 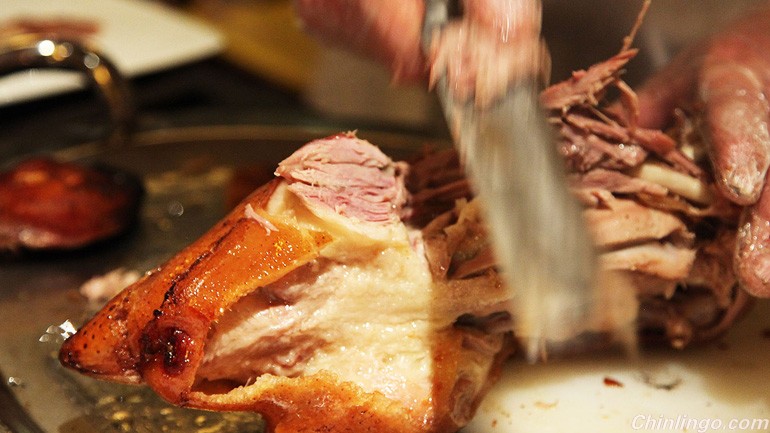 The next phase is even more insanely skilled. After removing the fat off the back of the duck, he splits off the wings, cleaning out some of the extra meat from around the sides of the carcass and placing it on a platter. The drumsticks are then bent downwards, exposing the big meaty sections of thigh, from which the chef carefully slices off half moon-shaped slivers of skin-lined flesh and starts shingling them on a platter in overlapping layers. 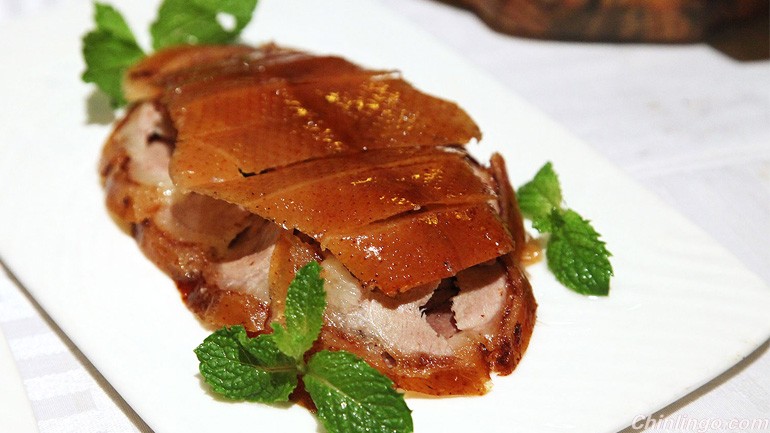 The whole thing is topped off with the sliced skin from the back and placed on the table. Finally, the chef places the plate of collected scraps—bits of meat, the wings and drumsticks, the split head, neck, and the coveted "pope's nose"—on your table and a waitress comes over with a basket full of paper-thin bó bǐng—wheat-based pancakes. 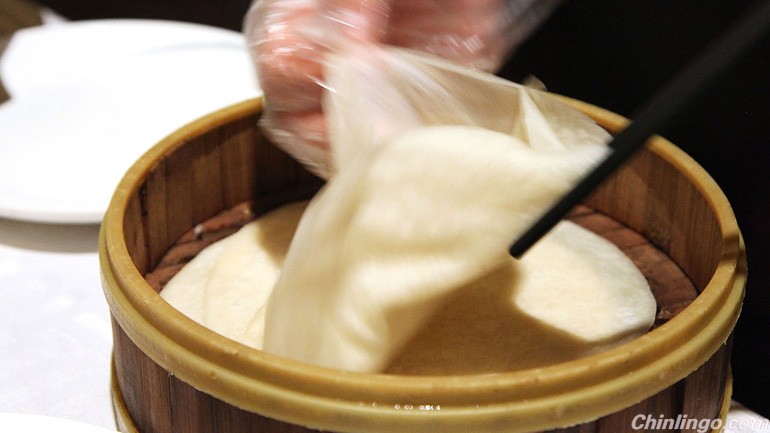 Next up in your in-flight entertainment: your waitress will demonstrate how to wrap your duck. She starts by peeling apart a single pancake. They're cooked by rolling two balls of dough together and heating them on a griddle. That way, after separating, each one ends up half as thick as you could get it on its own. 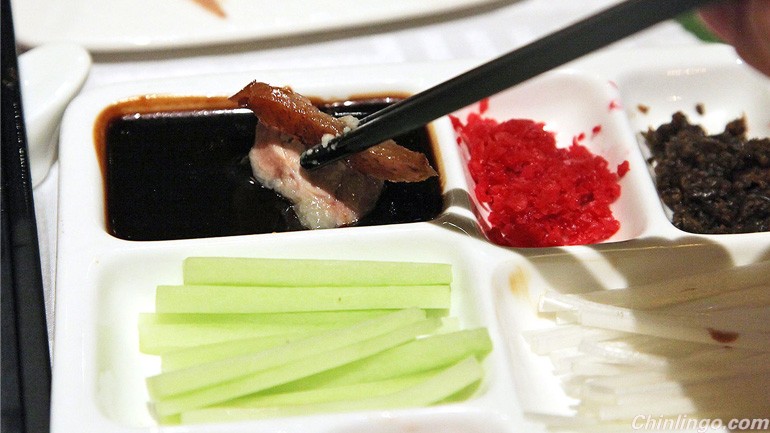 Next, she takes a bit of duck and dips it into fermented bean sauce—far saltier and more savory than the hoisin sauce you get in the States. Incidentally, after years of being annoyed at how difficult it is to spread a thin, even layer of sauce onto my pancake using chopsticks, I had a face-palm "duh" moment when she did this. It just makes so much more sense to dip the duck rather than spread the sauce.

She places two to three small slices of duck along one edge of the pancake. 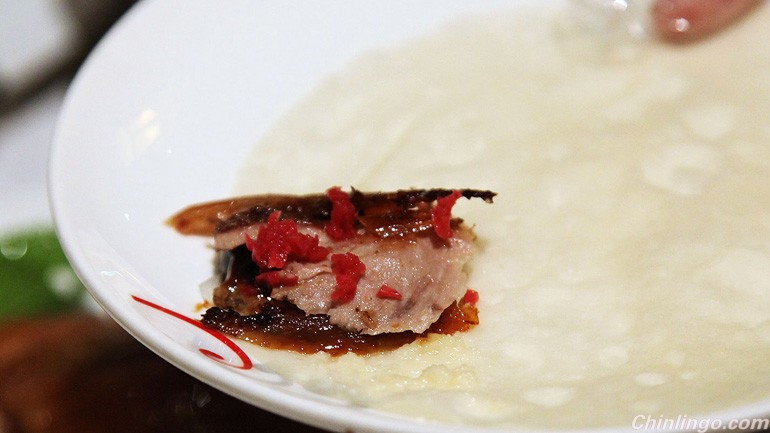 Next up: pickles. Your condiment tray will probably have at least one, perhaps two different types of chopped, very mild pickles.

If you're a man, your waitress may also ask you at this point whether you want to add some of the pungent pureed garlic from your tray. Apparently it's not a very womanly thing to partake in. Beware. That garlic is strong. 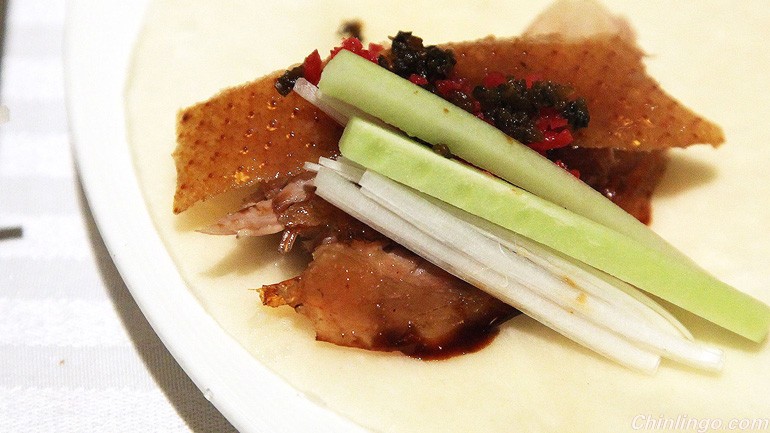 …followed by some cucumber batons.

Your duck is now ready to wrap. 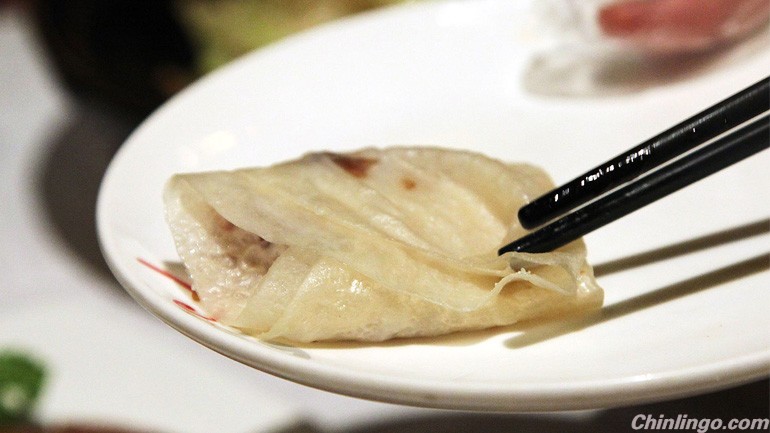 First the bottom folds over the top…

…followed by the edges. The idea here is to create a sealed package that will prevent the juices from leaking out of the bottom when you subsequently pick it up. When you do pick it up, make sure that the folded-over side is facing you, with the clean side facing outwards, lest you be mistaken for an uncouth heathen.

This ends your in-flight entertainment, though your waitress will probably stick around and watch you to make sure you get it before leaving you alone. 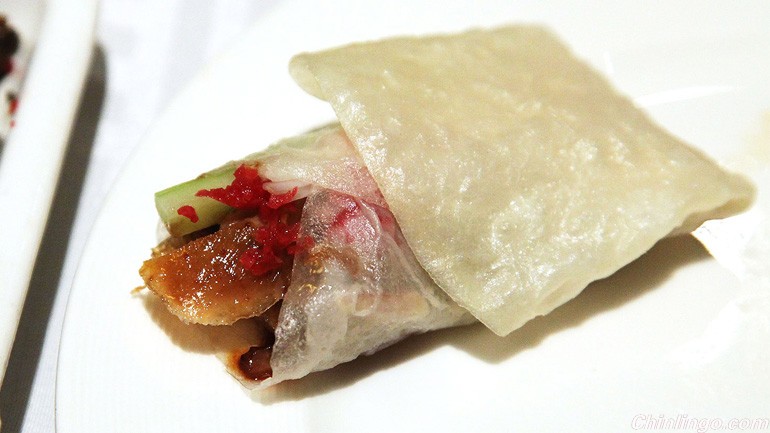 Your first solo-venture might look a bit like mine. I also accidentally overstuff my tacos and dumplings (doesn't everybody?).

With sides, a whole duck is easily enough of a meal for three to four people. My wife and I tried to tackle one on our own and fared admirably, but still left behind half a platter of skin (I almost cried as the waitress took it back to the kitchen), and most of the scraps. We'll have to come back better prepared next time. 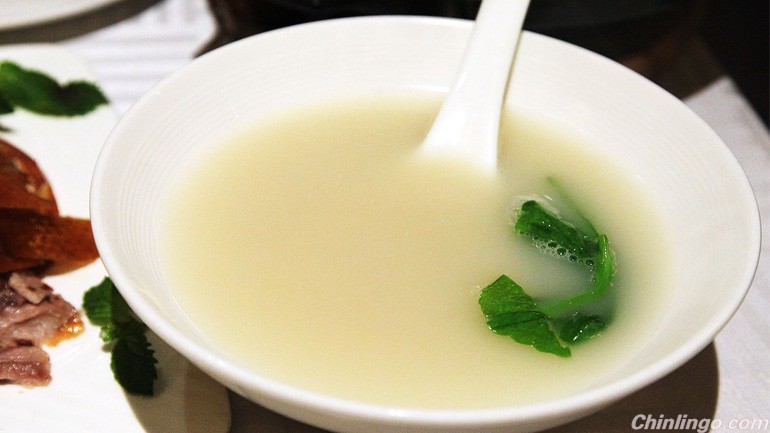 Meals end with a bowl of creamy white duck bone soup, served hot and intentionally bland—ours tasted mostly of white pepper with just a tiny pinch of salt—in order to cleanse your palate of the rich, flavor-packed duck you just finished.

I understand this concept from a philosophical perspective, but not from a practical one. Has anyone but a convalescent ever said "please sir, fetch me a bowl of your blandest broth that I may wash this glorious flavor from my lips."

Personally, I'd rather carry that duck around with me for a bit longer.

0 responses on "How to eat Peking Duck"