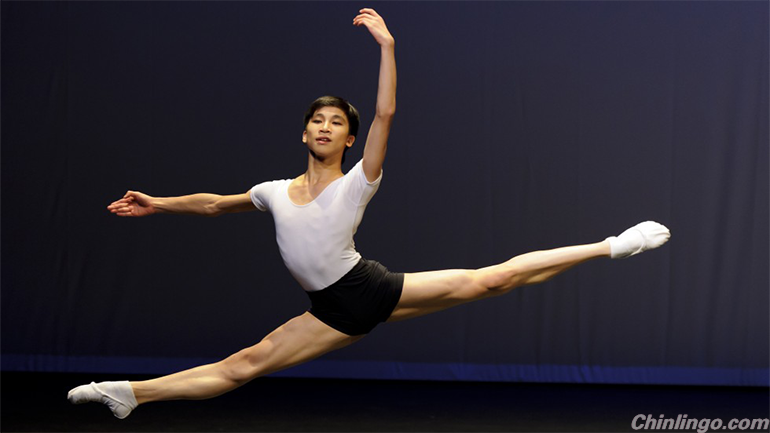 When its season opened late last month, the Paris Opera Ballet included the first Chinese dancer to be hired in its 346-year history.

Lam Chun-wing, a 19-year-old from a working-class Hong Kong suburb, is an unlikely addition to the world's oldest ballet company — a state institution steeped in French tradition. He has already danced in George Balanchine's "Themes and Variations," plus a work by Jerome Robbins, in a run that ended on Sunday. In November and December, Mr. Lam will perform in Rudolf Nureyev's "La Bayadère."

Mr. Lam's entry to the Paris Opera Ballet is part of a gradual change at the state-financed company, where more than 90 percent of the dancers are French. He grew up in a small Hong Kong apartment with five relatives and started taking dance lessons at age 7 at a small branch of a chain of schools run by Jean M. Wong, the grande dame of the territory's ballet teachers. At an annual event held only for top students, Ms. Wong quickly noticed that the boy was blessed with both talent and a classical dancer's ideal proportions.

"Everything about him is very precise," said Ms. Wong, who has been teaching for 55 years. "And he's so musical — he finishes each step exactly on the note." She was so impressed that she sent a DVD of Mr. Lam's dancing to the Ballet School at the Paris Opera Ballet in 2011. That same year, at 14, he became the first Chinese dancer to be admitted into the academy.

Mr. Lam had his lucky break last December, when the Paris Opera Ballet needed a last-minute replacement for a production of Jean-Guillaume Bart's "La Source." He danced a technically difficult scene in which male dancers portray otherworldly creatures, after both some main dancers and their replacements were injured. At the time, Mr. Lam was still a student and had not yet been hired by the company.

Nevertheless, he made his professional debut at the ornate Palais Garnier — painted blue, as the understudy of an understudy of an elf. After filling in for 23 shows, he got a back-stage thank-you directly from Benjamin Millepied, the Paris Opera's dance director.

"He has very polished technique — he's quick and fit," Mr. Millepied said in a telephone interview, adding that Mr. Lam was only one of three male dancers the company hired this year. "He's got great proportions. And after that trial, we knew he would be great for the company."

Mr. Millepied spoke of a "cultural change" at the ballet — one that reflected his international outlook and "American influences." Mr. Millepied, a native of Bordeaux, grew up partly in Senegal and danced with the New York City Ballet for more than a decade. He became a Hollywood name when he choreographed "Black Swan," where he met and married the movie's star, Natalie Portman.

"We want more diversity in the Paris Opera," Mr. Millepied said. "We want a 21st-century company that truly resembles the community." He added that he wished to see more international dancers at both the company and its school.

Back in Hong Kong in August, Mr. Lam was the star attraction at the Jean M. Wong School's 55th anniversary gala, where he danced the role of a dashing, comedic Basilio in "Don Quixote."

He was clearly the hometown hero in the sort of student show where 5-year-olds toddle around the edges of the village scenes in tutus. Booklets handed out at the Hong Kong Cultural Center showed him flying through the air, with the headline "He made history! The first Chinese to join the Paris Opera Ballet."

After the performance, Mr. Lam shyly accepted congratulations from awe-stuck students backstage. A slightly built teenager in shorts and a backpack, he then excused himself and found his parents, sister, aunt, uncle and cousin waiting in the lobby. His parents, a schoolteacher and an elevator repairman, have not had the chance to see their son dance in Paris.

Mr. Lam said he had decided to become a professional dancer at 11. But he faced several hurdles in Hong Kong, including the fact that he could not find a good male ballet teacher. The best he could do was cross the border with mainland Chinese to work with a teacher at the Guangzhou Ballet School during school holidays. 林隽永说，他在11岁的时候就决心成为职业芭蕾舞演员。但在香港，他面临不少障碍，包括找不到好的男芭蕾舞教师。他能找到的最好的解决办法，就是在学校放假期间，到内地的广州芭蕾舞学校，向那里的一位老师请教。

"It's totally different training," Ms. Wong said of male dancers. "They need to jump more. They need to do more turns. They need to learn the pas de deux. By the time Chun-wing was 13, he was really in a hurry to go overseas."

She started lobbying for him. She took his audition DVD to the Royal Ballet School in London, but he missed the minimum age requirement by a week. He received a scholarship to attend its summer school, but was still lacking a place for full-time study.

Another DVD was sent to the Paris Opera Ballet, where he was invited for a private audition. Almost as soon as they received the notice, the ballet teacher flew with her protégé to Paris. They went sightseeing the first day, stopping to gaze at the elaborate facades of the Paris Opera's residences. The second day, they rode in nervous silence to the Paris Opera's Ballet School in Nanterre, a suburb to the west of the city.

Mr. Lam was whisked away and Ms. Wong waited in the lobby for two hours. Finally, Élisabeth Platel, the legendary prima ballerina who is the director of the school, emerged and declared: "This boy has talent."

The next challenge was convincing Mr. Lam's family to let him move to France. Children in Hong Kong — a city with exorbitant home prices and not much of a social safety net — are usually pushed into reliable, traditional careers.

"He has very supportive parents," Ms. Wong said, "especially given that he is coming from a Chinese family with only one son."

When Mr. Lam moved to the Ballet School's boarding house at 14, he spoke almost no French. There were few foreigners among the 130 students. There was only one other boy from abroad, a Ukrainain who did not make it to the second year.

"I was so homesick," Mr. Lam said. "Sometimes at night, I'd think, 'What am I doing here?"' Despite his spectacular performances, he posted only one video on his personal website — of his grandmother cooking Cantonese food. (Someday, one presumes, Mr. Lam will have a publicist.)

In September, Mr. Lam began work as a quadrille, on the first rung of the ladder in the corps de ballet. He blushes when asked if he is proud of himself.