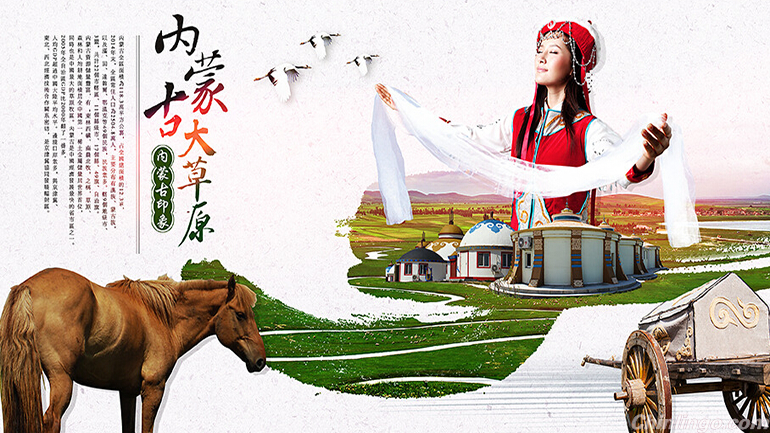 The Mongolians has a population of around 5.81 million, mostly living in the Inner Mongolia Autonomous Region in North China, and the rest residing in provinces of Jilin, Heilongjiang, Liaoning, Xinjiang, Hebei, and Qinghai and so on. The Mongolians is known as a nationality on the horseback, and animal husbandry is their leading industry. They boast good horsemanship, and like archery and wresting.

Mandarin Chinese is used, while they have their own spoken and written language, which belongs to the Mongolian branch of the Altaic language system. Current written script was created in the early 13th century, and after revision and development over the centuries, it came into the form used today.

The ancestors of the Mongolians belonged to small nomadic tribes roaming along the Erguna River during the 5th – 3rd century BC. In 1206 AD, a powerful clan leader of the region called on the other clan leader to discuss the possibility of uniting their separate territories into one single unit. Thus the Mongol Empire was born, and Genghis Khan became the ruler. 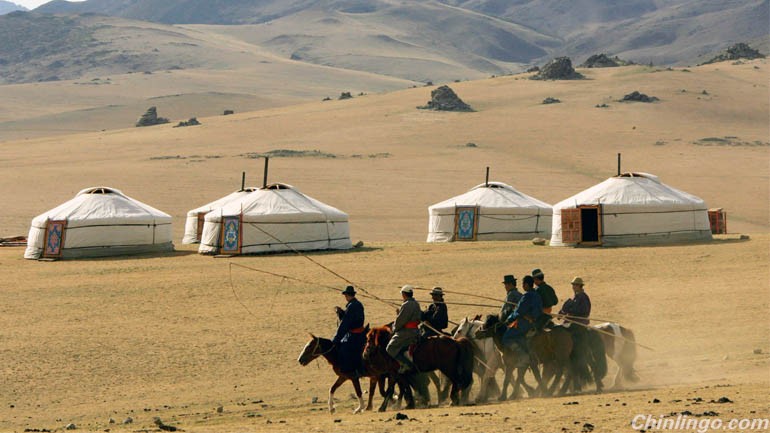 For Mongolians on the pasture, their typical house is the ger (yurt), a domed round tent. The ger is of a wooden lattice frame erected into a circle and secured with strips of rope, forming a head-high self-supporting cylinder. A door frame, roof poles and a canvas outer covering complete the set. For additional stability, a heavy weight is suspended from the center roof pole. Inside the ger is very spacious and well-ventilated. It is quickly dismantled, packed away and then transported by yak or camel to the next destination. 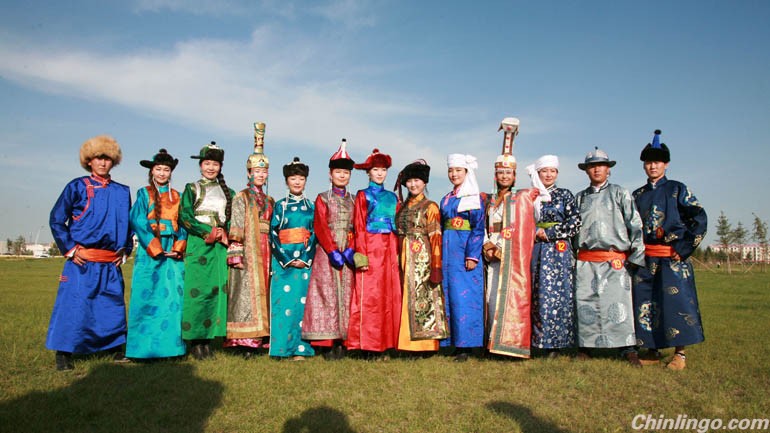 The caftan, hat, sash and boots form the indispensables of the Mongolian attire. The caftans come in various materials, ranging from leather to drapery. The caftan can also serve as a makeshift tent, a blanket, or a screen, while its long and wide sleeves can be rolled down to protect from the sun, wind or rain. Women's sash is generally shorter and narrower than men's. In some places, married women wear an embroidered silk vest instead of a sash. Men's sash is longer, folded into a broad band and is tightly tied around the waist. The sash also serves to stash the Mongolian knife and attach pouches.

The hat has always been the most special item of a Mongolian's attire. It is typically adorned with whatever trinkets the owner valued, or with pearls or even precious stones, if one could afford them, and with long, colorful tassels streaming down. A hat must be worn when meeting or greeting non-family members, entering a ger (though one may be invited to remove the hat once inside), or when in the street. It is considered indecorous to go bareheaded. 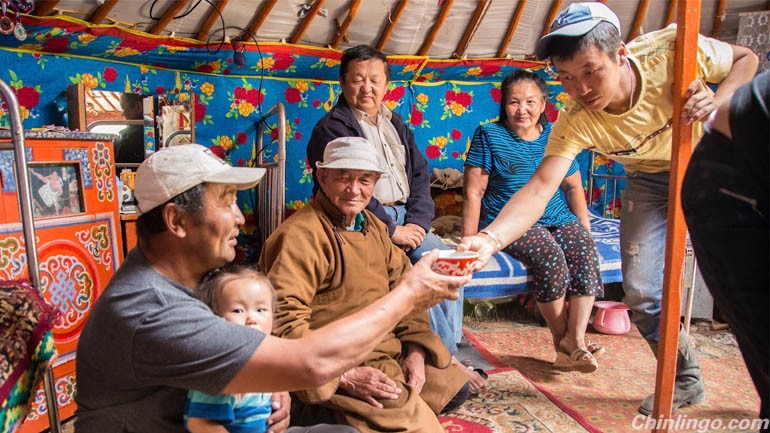 The Mongolians' nomadic way of life determined their diet, which mainly consists of meat, milk and other dairy products. This included mutton, beef and goat, as well as milk and other dairy products from cattle and goats. On occasion horse meat was eaten, but this was generally only at religious ceremonies and during festivals, as the horse enjoys a near-sacred status among the Mongols. These people of the steppe traditionally roast meat over an open fire – or boil it if it is less tender – and bake their bread in special ovens. A goat or a lamb might be roasted whole, or in sections.

Today, the diet of the Mongolians has been expanded to include vegetables as well as pasta and rice. Milk remains a staple in the Mongolian diet, however. It is also made into yoghurt, milk wine (i.e., fermented milk, the most prized of which is fermented mare's milk, which can be further fermented into a frothy, beer-like drink), milk tofu (a process involving coagulated, fermented milk, where the dry parts are separated and form into a stiff, tofu-like texture) and milk tea (crush the boiling brick tea or a few minutes, then slowly add milk while stirring), among many others. 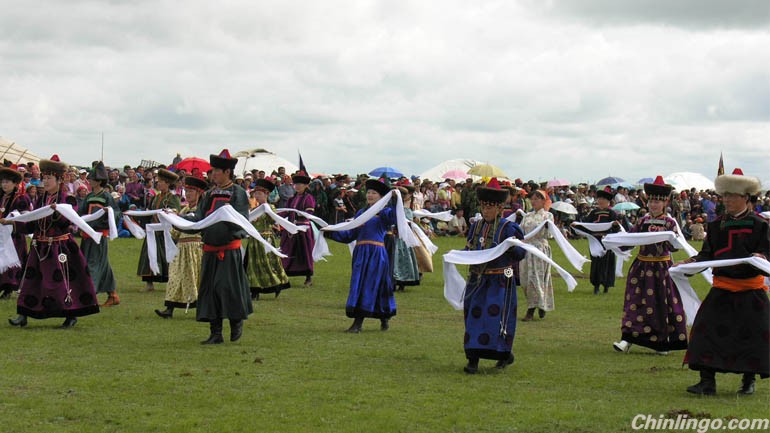 Hada, a Tibetan word, is a strip of silk used as a greeting gift among both Tibetans and Mongolians. It is presented under very specific circumstances only: when welcoming unfamiliar guests in one's home or when encountering a stranger on the steppe with whom a cordial relationship has developed. Hada is usually made from either silk or cotton. Mongolian Hada is generally white in color, but shades like light blue and light yellow occur as well. When one is lucky enough to be presented a Hada, one should grasp it gently in both hands while bowing slightly, and the presenter will also bow in return. The giving and receiving of Hada, including the act of bowing to each other, is an outward sign of mutual respect.

Passing the snuffbox is an old tradition in Mongolian culture, and is the most common exchange of amenities when people meet. When one is a guest in a Mongolian home, the host will take out his snuffbox, open it – its contents generally being very aromatic and consisting of a blend of tobacco and/or herbs – and pass it on to the guest. One is expected to pass the snuffbox under one's nose in order to better appreciate the tobacco's aroma. To be polite, one should nod one's head or give another sign of approbation. This shows respect and can serve as the basis for future amicable relations. The snuffbox contains a small spoon made either of gold, silver, copper, ivory, or camel bone. 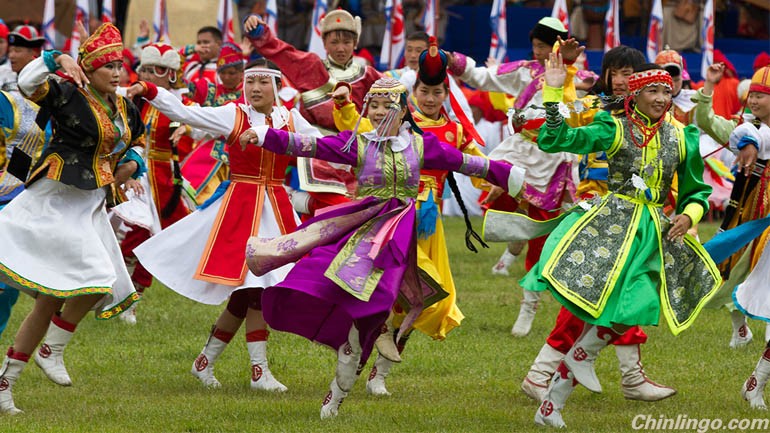 Naadam, short for Eriyn Gurvan Naadam ("Three Manly Games") means "entertainment" in the mind of the typical Mongolian. The Naadam Grasslands Festival has a history that dates back to the Yuan Dynasty (1279-1368 AD). The Festival is held on the 4th day of the sixth month of the Chinese calendar (between July and August in the Gregorian calendar), when the harvest season reaches culmination. The Festival can last 3 to 10 days, depending on the scale of the event, and people of any ethnic group or religious belief can participate in the games.

The Naadam Grassland Festival of Inner Mongolia Autonomous Region is Mongolians' most magnificent yearly entertainment event in China, combining the traditional "Three Manly Games" of Naadam – wrestling, horse racing, and archery – with cultural exhibits and even a livestock fair. With a history of almost 800 years, the Naadam Festival has become an important carrier of the Mongolian traditional culture.