Why are Chinese so fanatically interested in ‘China’s Mona Lisa’? 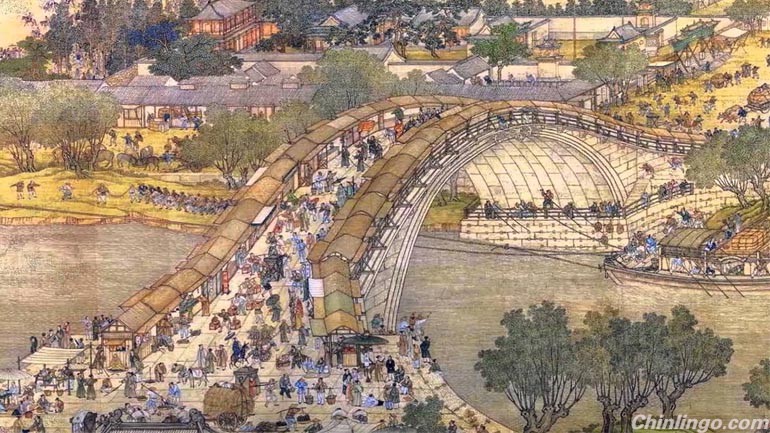 An hour before the Forbidden City opened to visitors one recent morning, the stone courtyard just south of the ancient imperial palace was abuzz. Within the vermilion walls, the usual mix of uniformed palace workers, tour guides and tourists milled about beneath a pale blue sky. Loudspeakers blared a recording about ticketing policies.

But at the center of it all was an atypical sight: a phalanx of more than 1,000 people, flanked by palace workers whose job was to keep the ranks in line. Unlike most visitors, this small army had come with only one goal: to see "Along the River During the Qingming Festival," an early 12th-century painted scroll considered so iconic that it is often called "China's Mona Lisa."

Since an exhibition celebrating the 90th anniversary of the Palace Museum opened in early September, people have been waiting for up to 10 hours to see this 17-foot-long masterpiece attributed to the painter Zhang Zeduan, an intricate ink-on-silk tableau of life in the Northern Song dynasty capital, Kaifeng. The best-known painting in the museum's vast collection, it has been shown in public only a few times, in Beijing most recently in 2005 for the museum's 80th anniversary.

The fanatical interest in the work coincides with a concerted push by the Chinese government to encourage interest in traditional culture and values, as a way of emphasizing its links to a history that goes back thousands of years.

And the crowds lining up have been widely covered both in the news media and on social media, particularly after photos began circulating of people frantically racing from the Meridian Gate entrance of the palace toward the exhibition hall. (Chinese news outlets were quick to label the phenomenon the gugong pao, or "Imperial Palace run.")

"There's been so much hype about this painting, so I decided to come early to check it out myself," said Jacqueline Zhang, 25, who works at a bank in Beijing and came at 5 a.m. to secure a place at the head of the line. She added, "This just shows how easily excited Chinese people can get."

Past exhibitions of the scroll have attracted huge crowds, but the heightened fervor these days comes as the term "wenhua," or culture, and the desire to appear cultured have become increasingly prominent in China.

"Now that people have money and social status, they want to show other people that they understand culture," said Chen Yimo, an expert in Chinese calligraphy and painting.

"Chinese people have a lot of respect for the term 'culture.' No matter how much money you have, if you don't have culture, then you're just a tuhao," said Mr. Chen, using a popular term for the crass nouveaux riches.

The growing emphasis on culture, however, stems partly from the government's efforts. In recent years, education officials have made a number of proposals, including revising elementary and middle school textbooks to increase the proportion of guoxue, or the study of Chinese culture, and reducing the importance of English on some versions of the gaokao, or university entrance examination, in favor of a greater emphasis on the Chinese language.

The commitment to promoting Mandarin has even extended abroad, as evidenced by the announcement last week by PresidentXi Jinping and President Obama of the "One Million Strong" initiative, which aims to have a million American students learning the language by 2020.

In a speech last year, Mr. Xi called traditional Chinese culture the lifeblood of the nation as well as a "foundation for China to compete in the world."

"People and the government talk about culture a lot more now, so it's become a kind of social trend," said Ma Weidu, a prominent antiques collector and the former host of several popular television programs on China Central Television about Chinese antiques.

"But I think for many people, it's a very surface-level interest. A lot of people want to see 'Along the River During the Qingming Festival' because it's very famous, not because they are actually interested in art. It stems from the Chinese tendency to follow the masses."

The public fascination with traditional culture, some experts say, has another element, too: the realization that many ancient objects would fetch millions in the marketplace.

"Taking pride in cultural heritage is an important factor, but there's also a huge interest in the monetary value of classical Chinese paintings," said Freda Murck, a scholar of Chinese art who worked at the Palace Museum for nine years. "Now when I talk to my Chinese friends, a lot of people ask me, 'How much would this be worth at auction?' "

Most, however, would not dare to ask that of "Qingming Festival," a national treasure that has "taken on a mythic quality because it's shown so little and is so widely available in publications," Ms. Murck said.

As the day that began in the already crowded courtyard wore on, a steady stream of visitors ignored signs estimating the length of the wait — as well as a worker with a bullhorn warning people to "please make a careful decision about getting in line."

They instead made their way to the back of the line that snaked around the mostly tree-lined path leading to the Hall of Martial Valor, where the exhibition is being held. Many, having seen the reports online, had brought folding stools and snacks.

Museum officials estimate that the exhibition has about 3,000 visitors a day — a small number compared with the tens of thousands who flow through the sprawling palace complex each day. But the line moved slowly "because viewers in the exhibition hall move too slowly," the museum said in a statement.

"So why exactly is 'Qingming Festival' so famous?" asked Audrey Cao, 40, who had arrived late to meet her friends, a group of fellow mothers, and was in line by herself.

"Because it captures what life was like during the Song dynasty, the peak of Chinese civilization," said Yin Yi, 61, the director of an art research center in Beijing standing in front of her.

"Oh, so it's like an iPhone panorama!" Ms. Cao exclaimed.

Viewers can spend only a few minutes looking at the scroll. They are repeatedly urged to move along by palace workers speaking in stern voices, but almost everyone left the exhibition beaming.

When Mr. Yin, the director of the art research center, finally reached the painting, the Forbidden City had closed for the day and the sun had disappeared. After his several minutes were up, he lingered to look at some of the calligraphy on display. Asked whether seeing the scroll for the first time, after spending so much time poring over reproductions online and in books, was worth the nearly nine-hour wait, he replied softly but without hesitation. "Yes. It was completely worth it."

0 responses on " Why are Chinese so fanatically interested in 'China's Mona Lisa'?"