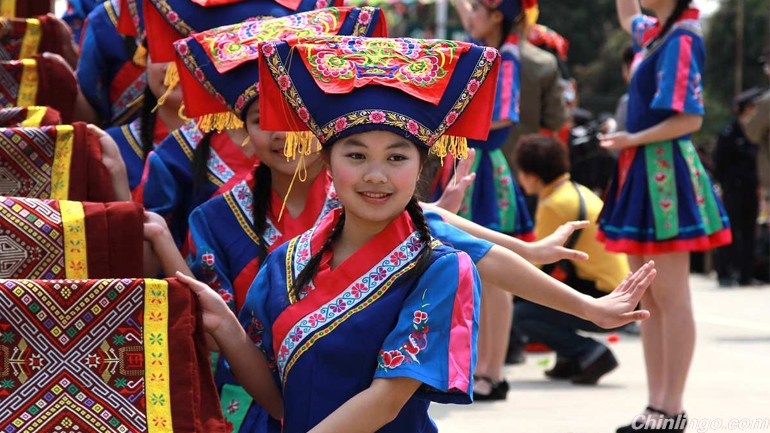 Zhuang minority (壮族，zhuàng zú) has the largest population (almost 18 million) among all the 55 ethnic groups in China. Most of them inhabit in Guangxi Zhuang Autonomous Region and Yunnan Province. In Guangdong, Hunan, Guizhou and Sichuan provinces of South China, there is also some distribution of Zhuang People.

The Zhuang ethnic group has its own language, which is generally divided into northern and southern dialects. In 1953, the Chinese Government launched a new language system of Zhuang characters based on Latin alphabet, but it was not widely used. Most people use Han-Chinese characters.

As early as Paleolithic period, first men of Zhuang had settled in Lingnan areas (whole of Guangxi and Guangdong Provinces, parts of Jiangxi and Hunan Provinces). They lived and labored together, and were able to use stone tools. 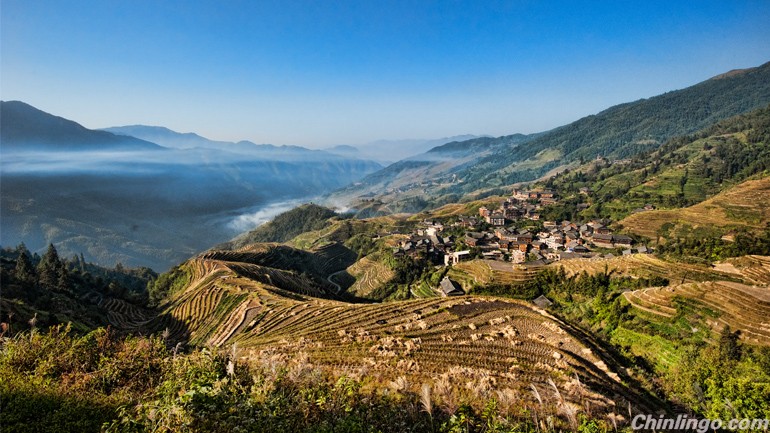 Rice and corn are abundantly grown in Zhuang areas, and thus become the staple food for Zhuang people. Daily consumed vegetables are numerous, and are boiled into soup, or stir-fired. Zhuang people basically eat all kinds of meat. Meat and vegetables are cooked medium well, which is believed to retain the fresh tasting of the materials. Home-made pickles are also popular because of people's preference for sour and spicy flavors.

Home-made rice wine is served for festivals and entertaining guests. Rice wine is mild and contains low amount of alcohol. Five-colored glutinous rice is served during Tomb-Sweeping Day (April 4 – 6) and Singing Festival (March 3 on lunar calendar). People use the saps of five different plants to soak and color the glutinous rice, till the rice take on five colors (black, red, yellow, purple and white), and then steam the rice. The finished rice is colorful, fragrant and nutritious.

Zhuang people like to inhabit on valley lands surrounded by mountains and waters. The house facade faces the farmland, and is well-lighted with a broad view. Houses are wooden, tile-roofed, or thatched, built in Ganlan style (constructed on pilings rather than entirely on the ground). Ganlan is also called Diaojiaolou (wooden houses projecting over the water). Some other ethnic groups in South China, such as Zhuang, Dong, Miao and Yao ethnic groups also share this house style.

The house is usually two-storied. The lower story consists of pilings that support the house, and bamboos, wood boards are filled between the pilings to form a wall for keeping livestock, storing farm tools, firewood or other sundries. Family members live on the upper story, which is divided into 3 or 5 rooms. Some houses are more complicated with lofts or annexes. 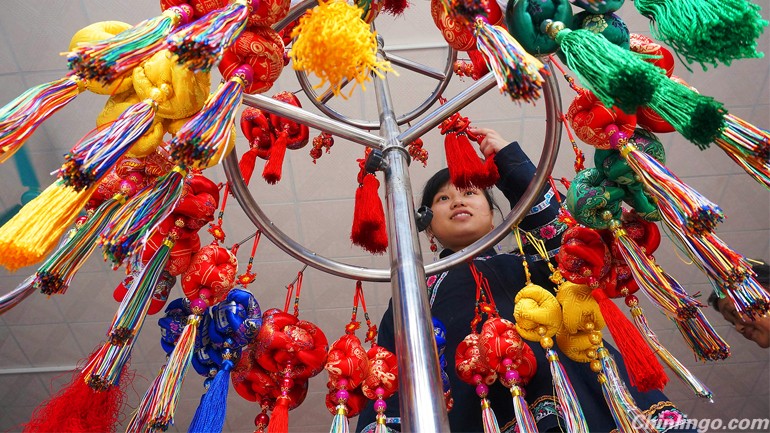 Traditional costumes are worn in ethnic areas or for special occasions. Dexterous Zhuang women use hand-woven fabric to make clothes of various styles. Usually girls wear a blue-and-black collarless jacket with bright furbelow, baggy trousers or Batik skirt, and a delicately embroidered apron is fastened on the waist. For boys, they are dressed in black front-opening coat with cloth-wrapped buttons, and wear a belt on the waist. Zhuang people fancy silver accessories.

Zhuang Brocade is one of the four famous Chinese brocades (the other three are: Yun Brocade from Nanjing, Shu Brocade from Sichuan Province, and Song Brocade from Suzhou). This splendid handicraft was originated in the Song Dynasty (960 – 1276 AD). They are woven with cotton, silk or flax threads into colorful patterns. Images of flowers, plants and animals are mostly adopted. The Brocade is very durable, and is widely used in making quilt covers, handbags, aprons, table-cloth, scarves, wall hangings, cushions, etc.

Another traditional handicraft of the Zhuang ethnic group is Xiuqiu (embroidery ball), a symbol of love and happiness. The balls are made of silk cloth, and have twelve connected petals. Each petal represents a month, and has an image of flowers, plants, or birds on it. The balls are typically red, yellow or green. Originally Xiuqiu are a love gift, a Zhuang girl will throw a Xiuqiu to a young man she admires to let him know that he is welcome to pursue her.

Zhuang people are monogamous. There are two forms of marriages, one is free love and the other is arranged marriage by parents. Normally the young men and women have enough freedom to choose whom they love. However, interference from parents is often seen. Both men and women are the labor force of the family, but only men have the right to inherit the family property.

There is one strange marriage custom among the Zhuang people – the wife stays away from her husband's house after marriage. The wife will return to her parents' the day after the wedding, and only during important festivals or busy farming seasons will she live temporarily at her husband's. It is after the wife's pregnancy that she begins to live permanently at her husband's. Before that, the couple might have to live separately for 2 or 3 years, or even longer. This custom is nowadays thought to impair the relationship between the couple, and has gradually gone out of existence.

Zhuang people are fond of singing, and Zhuang areas are also famed as 'the ocean of songs'. During slack farming seasons, holidays, festivals, or at weddings and funerals, Zhuang people will hold Gexu (singing fairs). On these occasions, young people from nearby villages will wear their finest costumes, and come together at Gexu to sing songs and meet their possible lover.

Besides sharing many festivals with the Han people, Zhuang people also have their own festivals and celebrations. Among them, the Ghost Festival and Singing Festival are the most important ones.

The Ghost Festival falls on July 14 on the lunar calendar, and is considered as the most important festival after the Spring Festival (January 1 on lunar calendar). It is for commemorating ancestors and the late family members. On this day, every family will stop farming, clean up the house, and gather around to prepare sacrifices. Sacrifices include duck meat (a must), rice, Ciba (glutinous rice cakes), fruits, among others. After the sacrifices, family members will sit around at the table and have family dinner together.

The Singing festival, on March 3 on lunar calendar, is a traditional festival for commemoration of Liu Sanjie (Third Sister Liu), a legendary folk singer of Zhuang ethnic group in the Tang Dynasty (618 – 907 AD). She was well-known not only because of her beautiful singing, but also her courage in confronting with local tyrants. A 1960's film depicting her stories made Liusanjie a household name across China.

On this day, people from nearby villages will come together to an open space to celebrate this joyous occasion. Five-colored glutinous rice, dyed eggs and many other dishes are prepared. This is also a good opportunity for the young people to find their lover. Adult singers sing to each other, and try to stump the other by creating lyrical lines that the other cannot match. If a girl and a boy fall in love, the girl will throw an embroidery ball to the boy, and the boy will present her a gift in return.