Why do floral antenna hairpins come into fashion in China?

BEIJING — When Mao stirred China with a call to let a hundred flowers bloom, he surely never imagined anything as frivolous as this.

Across China, grown-ups are sporting plastic decorations on their heads in the shape of vegetables, fruit and flowers.

When the trend started a few months ago, it was usually just a humble bean sprout clipped to the hair and erect like a little green flagpole.

But as the fad ramped up, especially during the current National Day holiday week when Beijing fills with visitors, it has escalated and diversified to include a riot of plastic vegetation. Now heads are bristling with clover, sunflowers, chrysanthemums, lavender, mushrooms, chilies, cherries, gourds and pine trees.

"Some people think it's cute, some think it's just plain infantile," said Wang Yue, a sales assistant who was carefully arranging three newly purchased flowers and a cherry stem on her friend's head.

"It doesn't really make you feel that different," said the friend with the cherry on top, Xi Caixia. "Maybe a bit childish."

No one seems to know how the mania started or why. Wearers and hawkers of the herbaceous headwear offered a bewildering range of theories, or baffled shrugs.

"This shows that in China now we'll try almost anything that we see on the Internet," said Wang Hao, a college student from northwest China wearing a sprig of clover while strolling a Beijing street. "Nobody knows what it means, but we do it anyway."

Some Chinese newspaper reports have suggested the fad harked back to ancient Chinese teachings about harmony with nature; others have seen echoes of Teletubbies, the late-'90s British television show featuring alien toddlers with wacky antennas sprouting from their bulbous heads.

The trend may have been inspired by the Japanese-style emoticons popular on Chinese websites, some say. Many wearers and sellers suspect it started in Chengdu, a city in southwest China known for its laid-back lifestyle.

"Bean sprouts are still our most popular item," said Zeng Wen, a wholesaler in Yiwu, a market city in eastern China that has thrived from selling consumers things that they never knew they needed, like glow-in-the-dark hula hoops and Big Mouth Billy Bass, the singing mounted fish.

The most common explanation on the streets was that the floral fascinators just looked cute — "meng meng da," in a cloying term made popular on the Internet. 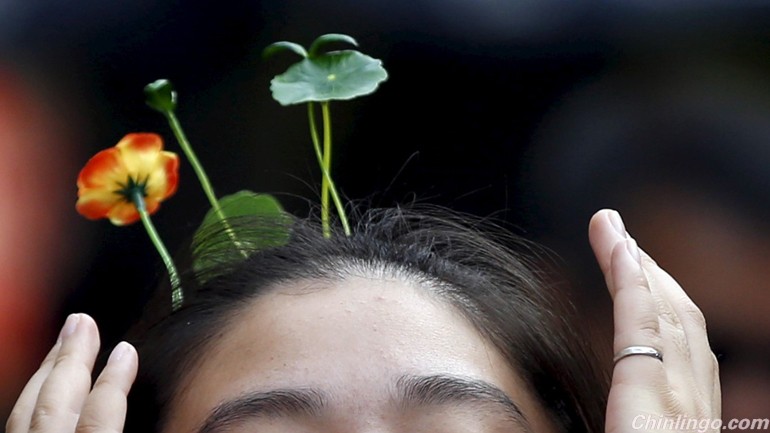 "It's fun, but I guess it's also about protecting the environment, to show that you care about nature," said Mao Wenli, 50, who was selling plantwear in downtown Beijing. Watching trays of cherries, roses and bean sprouts, he saw no paradox in their being churned out in factories, or in his being quite bald.

To be sure, most of the wearers are in their teens or twenties. And the spread of the head decorations reflects a China in which the Internet has lubricated the spread of trends, as well as rumors and ideas, among youth, and expanded opportunities to profit from fads.

"I think this comes more from Western culture," said Qiu Chuanhuan, a student at a college in southern China, who was visiting Beijing. He wore two bean sprouts and a gourd atop his mop of hair while strolling through South Luogu Lane, a once-hip neighborhood in Beijing that has been inundated by tourists, and headwear sellers.

"Chinese people usually aren't so comfortable standing out as individuals," Mr. Qiu said, "but now we're more open and willing to stand out."

If head plants speak to individualism, it is a mass-scale variety. Taobao, a popular Chinese retail website, lists thousands of sellers who have engaged in an arms race of selling increasingly elaborate floral head displays for increasingly low prices. On the streets around tourist sites here, competition between shouting hawkers was ferocious.

"I sold 60 or 70 sets yesterday, but I think it won't last much longer," said Zhou Delai, a hawker. "Now we're also selling a national flag hair clip for National Day."

And where one hair clip sold for five renminbi, or 80 cents, just a few weeks ago, competition has driven down prices to three or four for 80 cents.

But Li Jinghua, a hawker selling floral head decorations near the Forbidden City, said the trinkets may still have a world to conquer.

"Does your country have this yet?" she asked. "It will certainly spread abroad."

0 responses on "Why do floral antenna hairpins come into fashion in China?"