The story of a Chinese silicosis sufferer 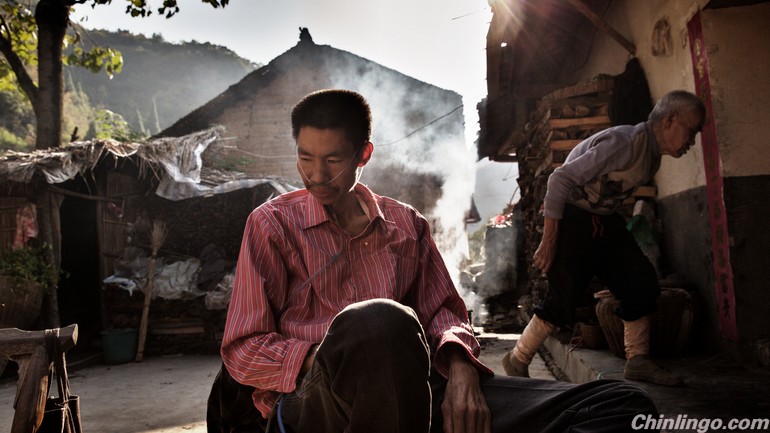 He Quangui spends his days in a bed connected to a battered oxygen machine that pumps air into his lungs. The monotonous sound is punctuated only by his gasping cough. Like many of his fellow villagers in a mountainous area of Shaanxi Province in China, he answered the government's call to leave his farm and make a better living as a migrant worker in the 1990s.

He went to work in an illegal gold mine, which, while helping fuel China's growing economy, cost him dearly: He has silicosis, a form of pneumoconiosis, China's most common occupational disease.

Today, when he leaves his bed, he often collapses, unable to breathe. There are treatments that could prolong his life and ease the suffering, but he has neither money nor benefits after his seven years working in the mines.

Had he not met the photographer Sim Chi Yin at his fruit stand in 2011, he would most likely be dead. She came to his remote village to document the ravages of lung disease among the men who worked as migrant miners. To make the story more immediate, she sought a dying miner to be the main character, and soon settled on Mr. He. Mr. He learned he had silicosis in 2004. He lived in an old earthen house with his wife, Mi Shixiu, and their son, Jinbo. Together, they sold fruit; Ms. Sim stayed in a spare room above the stand, taking photos while trying to persuade the couple to let her into their lives. Though she started out doing a story about silicosis, she soon saw a different narrative. 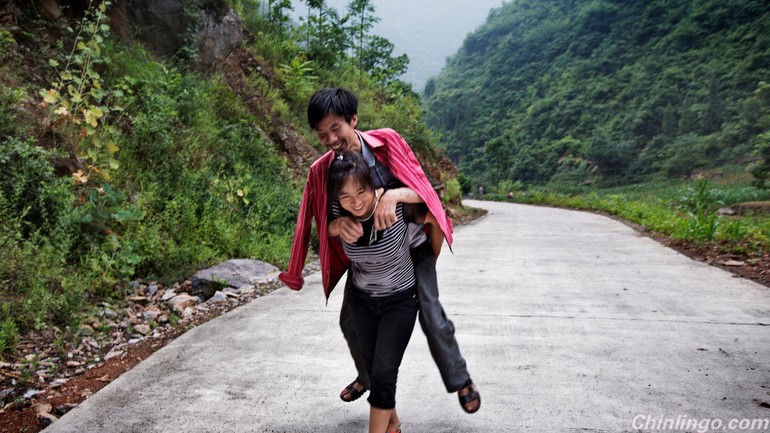 "I realized this was not just a story about a dying man in a remote village in China," she said. "It was a universal love story."

"Their love was so powerful and palpable and so pure," she said. "Even now, they cuddle and play like teenagers."

Ms. Sim returned home after a week with some photos and a sense that the project might not work out because the couple was not interested in being photographed over a long period. But six months later, Mr. He's wife called, crying and desperate for help.

Ms. Sim contacted a friend, an investigative journalist who ran an organization for poor people with silicosis. It arranged for a $1,600 grant so Mr. He could get treatment at a hospital. She flew to Xi'an and picked up Mr. He, who could not walk and had to be carried by his brother-in-law. 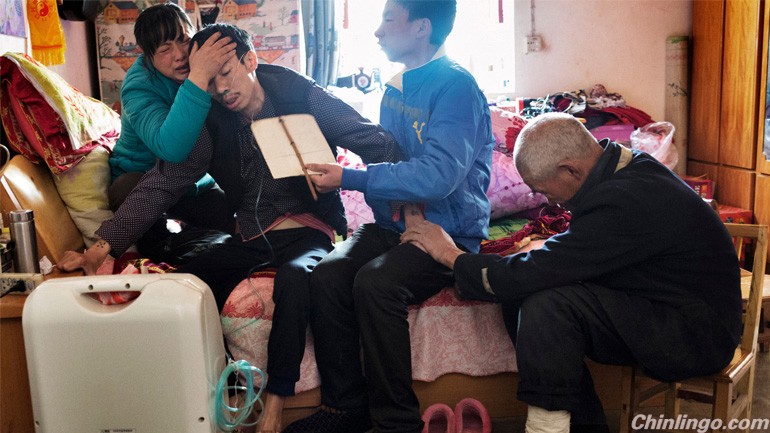 She spent long days at the hospital as both "caretaker and court jester trying to lift his spirits," she said. At night, she returned to her hotel room and sobbed. Depressed, Mr. He asked Ms. Sim to take him far away, kill him and dump his body if the treatment failed.The hospital stay was a turning point. Ms. Sim was no longer a stranger but, according to Mr. He, was his "savior." From that point, she stayed in his home whenever she visited, and she became close to his family. Her intervention changed the story, and Ms. Sim acknowledges that some might find that unethical. But she felt the situation demanded action.

"I was a human being first and a photographer second," she said. "As a documentary photographer, I want to bring about change around large issues, but given the opportunity to make a concrete change in one person's life, it would be unconscionable not to do so."

She has spent much of the last four years following Mr. He's travails, living in his home and falling asleep in the next room listening to the drone of the oxygen machine. Once, she was awakened before dawn when Mr. He attempted suicide.

In her journal, Ms. Sim noted him saying: "I have completely given up hope this time. Moaning out loud, short of breath. If I were a rich man, I'd see it differently. I'd go to a hospital in the city and use the best drugs, and I'll still be able to live for a few more years. But I don't have the money."Ms. Sim, who sometimes photographs for The New York Times, has turned her attention to getting Mr. He's story out while he is still alive. Despite the powerful images, she has had few takers.

"I've showed the photos and video to perhaps 15 or 20 editors, some of whom cried, but no one would publish it in print," she said. "It's not a sexy subject, and the photos aren't highly aestheticized."

They are not over-processed, blurry black-and-white images, nor are they fine art portraits, she added.

"This is a story that is not about me or my vision or my aesthetics," she said. "It's about a dying man and the impact on his family. It's about this disease that's China's No. 1 occupational disease, period."

National Geographic is the only magazine that expressed serious interest in publishing it, though a 10-page layout was ultimately rejected for publication. Instead, a video on Mr. He was featured on its photo blog, Proof.

Mr. He now has an inexpensive smartphone and uses social media to share health information with other miners with silicosis. He weighs less than 90 pounds but "is still hanging on," Ms. Sim said. To keep his spirits up, she tells him that he must stay alive to see the impact of the videos and photo essay.

The Chinese news and photo website Tencent published the photos and videos this month and raised $16,000 from readers for Mr. He, who can now go to a hospital for new treatments, repay some debts and fix his leaking roof.

Mr. He sent a text to Ms. Sim last week: "I didn't think that I could hold on and live till now, that I would see this happening with my own eyes, that I would enjoy the fruits of this collaboration myself and have it prolong my life."

0 responses on "The story of a Chinese silicosis sufferer"