History and meanings of Chinese surnames 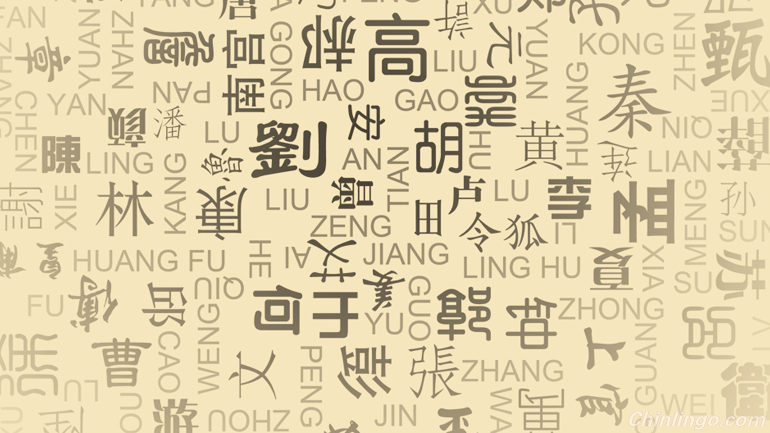 Chinese names are normally a combination of two to three Chinese characters, showing one's surname and given name. However, different from a western name, the Chinese surname is placed before the person's given name. Take the name of Wang Xiaoming and John Smith for example, "Wang" is the surname and "Xiaoming" is the given name of the person while "Smith" is John's surname. Do you notice the difference?

Chinese surnames can date back to the period of matriarchal clan society. Different clans held their own logos and surnames. The character of surname 姓 is a combination of 女 female and 生 give birth to, which shows the dominating role of mother at the period of time. Chinese surnames hold the history and the honour of the family and it was considered as a symbol of the social positioning of the family and the pride.

What are the meanings and history of the surnames?

Here are some common ones:

1. Influenced by the matriarchal clans, many of the surnames of early age shared the sign of 女 female, for example, 姜(jiang), 姬(ji), 姚(yao), 嬴(ying), 姒(si). 嬴 was the surname of Qin Shihuang, the first emperor of China in Qin Dynasty.

2. Take the surname from the feudal fiefdom. After the foundation of Zhou Dynasty, the emperor granted titles and territories to the nobles, many of whom took the name of the lands as their surname. Some examples are 鲁(lu), 卫(wei), 宋(song), 陈(chen), 韩(han), 赵 (zhao).

4. Take the sequence of siblings as surname. In the Zhou Dynasty, siblings were ranked as 孟 (meng), 仲(zhong), 叔(shu), 季（ji）and their descendants took it as their surname. For example, Mencius Meng Zi had the surname of 孟 meng.

5. Take one's job as surname. Similar to western surnames Smith and Carpenter, Chinese also took occupations as their surname. 屠(tu) was a butcher, 陶(tao) was a potter.

6. Take one's rank of nobility as surname. The common surname 王(wang) means King. Currently there are over 23,000 existing Chinese surnames with only 100 active ones. That's the reason why you are meeting a lot of Mr. Zhang and Miss Wang in China. As surnames are important in one's life, do remember to address a Chinese, instead of Mr. Zhang, he is addressed as Zhang Mr. – 张先生（Zhang Xiansheng）.

If you want to know more common Chinese surnames, you can check out this list.

0 responses on "History and meanings of Chinese surnames"