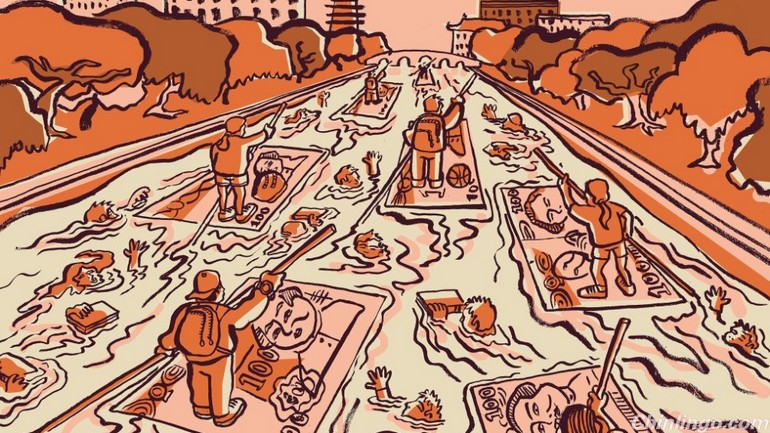 BEIJING — Every September, the campuses of Peking and Tsinghua Universities, dubbed the Harvard and M.I.T. of China, brim with bright-eyed new students, the winners of China's cutthroat education system. These young men and women possess the outlook of cosmopolitan youth worldwide: sporting designer clothes and wielding smartphones, they share experiences of foreign travel and bond over common fondness for Western television shows such as "The Big Bang Theory" and "Sherlock."

They are destined for bright futures: In a few decades, they will fill high-powered positions in government and become executives in state banks and multinational companies. But their ever-expanding career possibilities belie the increasingly narrow slice of society they represent.

China's state education system, which offers nine years of compulsory schooling and admits students to colleges strictly through exam scores, is often hailed abroad as a paradigm for educational equity. The impression is reinforced by Chinese students' consistently stellar performance in international standardized tests. But this reputation is a myth.

While China has phenomenally expanded basic education for its people, quadrupling its output of college graduates in the past decade, it has also created a system that discriminates against its less wealthy and poorly connected citizens, thwarting social mobility at every step with bureaucratic and financial barriers.

A huge gap in educational opportunities between students from rural areas and those from cities is one of the main culprits. Some 60 million students in rural schools are "left-behind" children, cared for by their grandparents as their parents seek work in faraway cities. While many of their urban peers attend schools equipped with state-of-the-art facilities and well-trained teachers, rural students often huddle in decrepit school buildings and struggle to grasp advanced subjects such as English and chemistry amid a dearth of qualified instructors.

For migrant children who follow their parents to cities, the opportunity for a decent education is similarly limited, as various government policies foil their attempts at full integration. Thehukou system — residency status that ties access to subsidized social services to one's hometown — denies rural children the right to enter urban public schools. Many migrant children are relegated to private schools that charge higher tuition and offer subpar education. Recent reforms have only had tangential impact on leveling the playing field, and are mostly limited to smaller cities. In large metropolises like Beijing, new policies seem intended less to promote educational equity than to exacerbate the discrimination. Most migrants have no choice but to send their children back to their rural hometowns.

China requires the vast majority of students to take the national college entrance examination in their home province, and elite universities allocate higher admission quotas to first-tier cities like Beijing and Shanghai. One researcher showed that an applicant from Beijing is 41 times more likely to be admitted to Peking University as a fellow student from the poor and largely rural province of Anhui.

Even an urban residency status doesn't ensure educational equity among city dwellers. The quality of urban schools varies widely, and the competition to enter top schools has spawned rampant corruption. Parents fork out tens of thousands of dollars under the guise of "voluntary donations" to secure a slot for their children in elite elementary schools. At top-ranked high schools, such as the one I attended in Beijing, these charges can reach $130,000. Further advantage can be purchased by parents who can pay handsomely to hire teachers to offer extra tutoring to their children, a practice discouraged by the authorities but widespread in reality.

To curb the culture of graft, Beijing has implemented policies this year that require students to attend elementary schools in their home districts. But the new rules, instead of stopping parents from gaming the system, simply channeled the cash to another market. Property in well-regarded school districts became Beijing's hottest commodity this spring. Families have been tripping over one another to trade spacious homes in posh compounds for dilapidated flats next to prestigious elementary schools. In a sought-after neighborhood in the Xicheng district, for example, a 107-square-foot flat was listed for $550,000.

Chinese education, having always placed enormous emphasis on test scores, is now becoming a game of another set of numbers. When graduating high school students walk into test centers to take the most important exam in their life, their chances are determined not only by a decade of assiduous study, but also by the costs of their cramming lessons, the years their parents have toiled in cities in exchange for an urban residency permit, and the admission quotas universities allot to the provinces. The system that has functioned as the chief engine for mobility since ancient times now serves to reinforce entrenched social exclusion.

My mother, who attended Peking University in the late 1970s, remembered being surrounded by classmates of all walks of life — from the heirs of party officials and the scions of intellectuals, to workers fresh out of factories and peasants hailing from far-flung provinces. In the decades that followed, the economic opening that has led to vast wealth, along with extreme income inequality, has all but obliterated such diversity in the top tier of Chinese education.

China has vowed to transform its manufacturing- and export-based economy into one driven by knowledge and innovation. To reach that goal, it is pivotal that its youth develop to their fullest potential. The Chinese education system will not live up to its reputation as the great equalizer until the son of a rice farmer in Hunan and the daughter of a civil servant in Beijing can both dream of a future inside the red columns of Peking University.